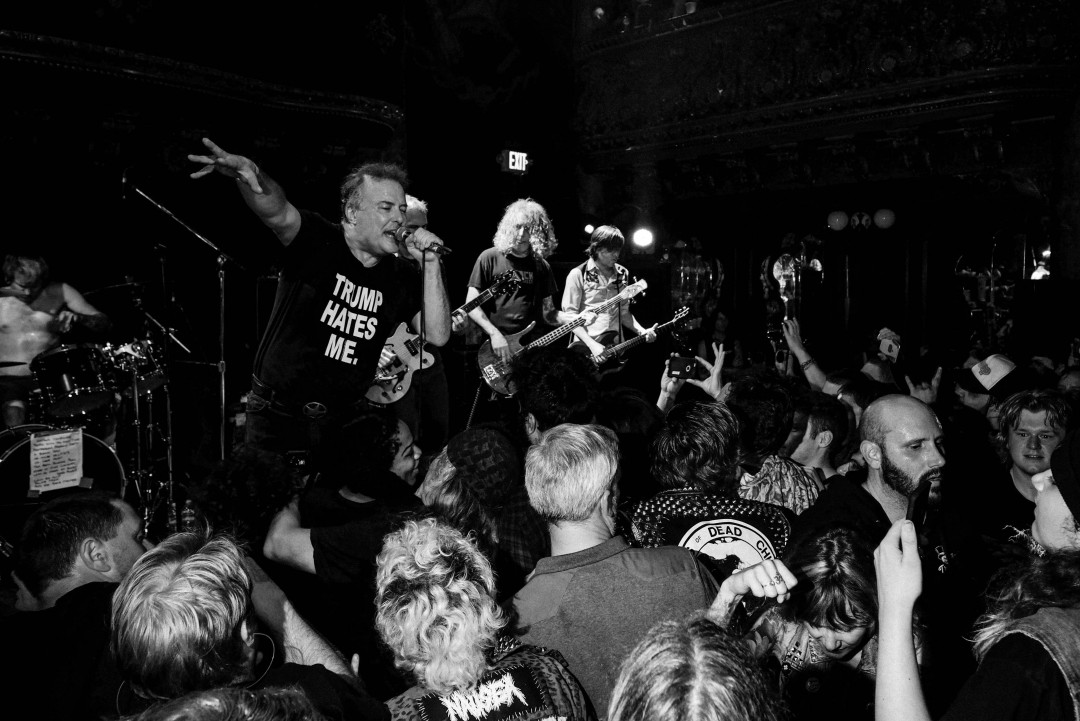 You can check out part one right here,, part two here, and part three here! You can read Part Four below, right now.

Do you see what people say about you on Facebook and Instagram? I pay no fucking attention to what people say about me on social media. I learned that from way back on the give and take and gossip and dialogue and horseshit that goes on at MaximumRockandRoll and still goes on today. I can worry about trying to please everyone of these people or I can just be myself.

Sometimes people have even said things like, “you’re such political person, how can you listen to stuff made by people who are right wing or worse?” And I’m like, ‘”Hey, wait a minute, I can’t imagine having a good political discussion with jerry Lee Lewis, but when I hear punk music and rock and roll, and it ain’t got no Jerry Lee in it, I can tell right away.” And if ya ain’t got no Jerry Lee in ya, you need to go listen right away, regardless of what his politics might be, because he’s fuckin’ Jerry Lee Lewis, ok?!

Let’s talk about what you meant though, by how the digital age is kind of encroaching on humanity on “No More Selfies.” It also extends to another side of the digital age and device people, which I guess I’m one too now. I’ve got one in my hand that I’m talking to you on right now. And I’ve gone wandering around on the net and listening to stuff on youtube and reading about shit and then reading another thing and another thing and checking texts and emails and then I look up and the sun’s gone down and I haven’t even eaten breakfast. Yes, I have this problem, too. Are you using the tool or is the tool using you?

With selfies, it’s not like I won’t do them. Any Japanese band that come through in the ‘80s wanted them and I got used to. Okay, that’s fine. It made me chuckle a little bit. Sure, I’ll do them. But there’s a time and a place for everything.

What that song is about is it’s about people that lose all sense of boundaries and lose humanity and see people as another thing that they can mount up in their trophy room so they can show off to their virtual friends and never even look at it again. It as gotten out of hand at times. If I’m in the middle of a conversation that is obviously important, you don’t just butt in and put your hand in front of other people’s faces- grinning and waving your hand and “okay organ grinder monkey, it’s time to stop yourorgan and smile for me!” And it’s not just younger people. It’s all ages of people where any sense of human boundaries just go out the window. That’s what I’m getting at.

If there’s nothing going on, and people are just chilling, you want to get a picture? Sure, no problem. I’ll do it when it’s the right time. But it really started building up when I went out to the GWARBQ in Richmond- it was the one where everyone was gathering to say goodbye to Dave Brockie. That was a real hard one for me and a lot of people dear to me had been dying. And someone like Dave was so unexpected and so stupid! Such a waste! It’s still one of the ones that is the hardest to get over! He and I went way back to the first time I saw GWAR and he was buddies with Winston Smith and he was very educated about art, so he and Winston had a great time. Winston loved GWAR. Watching Winston get thrown into the GWAR meat grinder was always great fun. Even when I had slightly longer hair then I do now, and it was kind of curly, I went on stage at the Warfield as Bill Graham, and a lot of people actually thought I was Bill Graham, and I had another Bill Graham temper tantrum, “You’re all scum! I’ve got your money now! I think this music is shit! They’ll never play as good as Jerry Garcia!”

The picked “Bill Graham” up and threw him in the meat grinder and the crowd went crazy. It was another one of those great GWAR moments. So, at the GWARBQ, I had been up for twenty four hours, I was famished, and there was one selfie after another and I was like, “there has got to be another way to do this.” So, then we go out to the service, and Lamb of God said something, and I did, and then we marched over to this bluff and to send off Dave, they actually did a Viking tribute- I think Dave had already been cremated in a private family service. But they got a boat that they had made to look like a Viking boat and out an Oderus costume in the boot.

Then they sent the boat out on the water and they had Danielle Stampe, who you might know better as Slymentra Hyman, she had come back, and for the ceremony, they made her into a Valkyrie with big wings and stuff. So, she kind of led the marhc to the bluff and uh… [chokes up]… since she had the skill, she fired the flaming arrow into Oderus and it caught fire. She just broke and was crying, and I’m trying to comfort her, and all the black makeup was running down her face, the kind of grief that can take over at the time like that. She was like “he was the best relationship I ever had, we were together for three years of GWAR and not everybody knew that” and I was crying too, so upset, and here we are, both getting tapped on, again and again, people demanding selfies then and there. I thought I’m writing a song about this. Enough is enough.

I’ve had people threaten to fight me, or collar me and I’m worried they’re going to try and punch me with the other hand, so I get ready to punch them, and instead it’s a phone! That stuff isn’t cool and if you thought for two seconds, you’d realize that. The message of the song isn’t that I’ll never do selfies, it’s think first… or do unto others as you would want done unto you…

One can only imagine what Brockie could have done in the current political climate. What a loss! Oh I know! When they went to Austrlaia, They even knew enough to make a GWAR monster out of that horrible climate change deny-er Tony Abbot, who I call the Abbatoir. They even brought Tony Abbot on stage and chopped his head off on the biggest festival in Australia. Dave never likes to admit that he has any kind of consciousness whatsoever, but here are times when he does.

But he’s also the kind of guy- getting that many people to cooperate to make GWAR, let alone keep it going, is a massive accomplishment in of itself. Just keeping a three, four, five piece band together can be a struggle! People don’t get together, people don’t get together, that’s hard! Let alone Ithcy-O who has 57 people now! But the mainspring of GWAR was Dave. But, there is such a strong structure in GWAR they are able to continue on. And apparently, he was getting ready to retire the character anyway. Apparently, his plan was to go off into the rural cabin that he had gotten ahold of write about Blackbeard the pirate who did a lot of piracy right there in Virginia and I have no doubt that he was capable of writing a decent book.

Are the people of America going to make it through the crisis that we are in? Is it going to be a good result? It depends what you call “good.” We have a lot brick by brick rebuilding work to do. Biden is right when he says “build back better.” Does he mean it, or does he meant it as little as Obama meant “hope and change?” “I’ll sell you hope and change, but the main contributor to my campaign was Goldman Sachs and that’s what you’re gonna get.” There has to be more now, and we have to put the blowtorches up their asses.

And thankfully now, we do have people like Alexandria Ocasio-Cortez and the rest of the so called “Squad” and Bernie, and some of the others. Amazingly, it was senator Marky who sponsored the Green New Deal in the senate! He and Ocasio-Cortez are the main writers of that bill and that saved his fuckin’ neck in the primary against Kennedy. No Kennedy had ever lost a primary in Massachusetts, but the new green deal saved Markey’s ass- and daring to be associated with that “wicked squad,” and the people associated with that squad came out and voted for him.

But I have to stress, so close to the election, it’s not all about who is the fucking president. For the most part, Americans base their votes for president on which corporate cartoon character they can stomach having to see on the TV every night. It’s a beauty contest. The further down the ballot, the more important your vote becomes. It matters who your state representative is. It matters who your governor is. It matters who is on the school board. All those “yes or no” positions matter- that’s how you decimalize cannabis. That’s how you save rent control. That’s how you avoid using public funds to pay for a private sports stadium for a billionaire that could just build it and pay for it himself. That’s where you gotta learn that sit, and vote smart, and vote in every election.

Hardly anybody pays attention to the down ballot stuff and ballot initiatives, which means the more people like us that show up and vote, the more likely we are to get the things that we need. That’s where the brick by brick approach comes from. You can’t expect a magic wand from Biden, especially if one half of controlled by the east Bay Ray of Congress, Mitch McConnell… I had to say it…

Contests: Check Out D.O.A.'s guide to the Presidential Debate (and win some D.O.A. vinyl!)