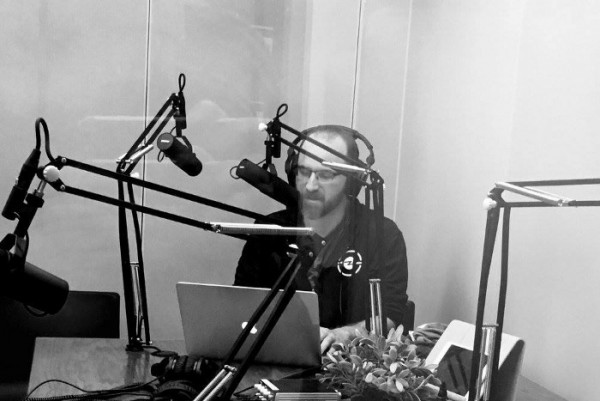 by Adam White Interviews 2 years ago

Roman Mars has kept Radiotopia -- his wildly popular podcast company -- independent in a time when podcasting has become a multi-million dollar business. What does he owe the decision to? Values learned in the DC punk rock scene. Punknews contributor Graham Isador recently spoke with Mars on his punk roots, the 99% Invisible podcast, and his new book.

Roman Mars is the host and creator of the podcast 99% Invisible. Each week for the past decade the show uses stories and interviews to expose the unseen aspects of architecture and design. Sometimes that means examining how we'll warn future generations about decaying nuclear waste if language isn't an option. Other times it is documenting attempts at creating a raccoon-proof garbage bin.

Since its inception, the show has been downloaded over 400 million times. It's consistently on top of the podcast charts. Last month saw the release of a companion book to the show -- The 99% Invisible City -- that landed on the New York Times bestseller list. Among literary types and the NPR crowd, Mars has proven himself a heavy hitter, earning the praise from Ira Glass of This American Life and Radiolab's Jad Abumrad. But the thing Mars attributes his work ethic and success to are lessons learned from the punk scene.

Recently I had a chance to speak with Mars, connecting the dots between 99% Invisible and DC hardcore and chatting about the decision to keep his podcast independent in a world where high-quality podcasting has become a multi-million dollar industry.

Graham Isador: Can you talk to me about how you first discovered punk? What was that moment for you?

Roman Mars: Maybe sixth or seventh grade. My sister used to just send me these tapes of her college radio station. I was obsessed with them. I'd listen constantly to these tapes having no idea who the bands were because college radio was notorious for playing music without giving credit. I was the exact same way when I was a college DJ. You're so shy and bad at your job.

I had all of these songs I knew or thought I knew. There was this song "I Will Refuse" by the band Pailhead. I had no idea who was in the band but it turns out it was Ian Mackaye and Al Jourgensen of Ministry. And that was like my anthem as a fourteen-year-old. And slowly that started opening me up to the DC sound. It was like my gateway.

I feel like if punk is meaningful to you at a young age, it also informs your values and perspective on the world. Would you say that's true for you?

By the time I was sixteen I had met other DC punks and discovered straight edge. I was a kid who had different parts of his life destroyed by alcoholism and was on a bad path myself. And there was something about straight edge that meant the world to me. It's easy to roll your eyes at that today -- with the intolerance built into it -- but for me, it was a careful examination of your life. Punk was a positive way I could be a part of something when the rest of the culture wasn't giving me much. I will refuse was like my mantra. I will not be a part of something. I will not be a part of your football games. I will not be part of your music. I will not be part of anything that you people in high school value. But then when punk came, I found a real love for something. And that is such a powerful force.

The reason why American hardcore was so much more meaningful than British punk was a strain of nihilism in British punk, which I never shared. The punk rock community that I was part of fought for the world in every way possible. They were not giving up. They were angry and fighting. Not angry and saying fuck it all. That strain of like the Dead Kennedys and their constructive criticism. And the movement and thought of Dischord and Ian Mackaye. How they thought about their business and their role in our community taught me so much. It meant everything. I was so happy to find something that I genuinely cared about.

Those things are very important to me too. But some people might have a hard time connecting the work you do now with 99% Invisible to your roots in the punk scene. How do those dots get connected?

I think maybe that means people don't understand the DC punk scene. They have this idea of Mohawks and leather vests and they think of punk in that way. But to me the way that I approach the world has so much to do with the values I learned there. The sense of play. The sense of things mattering. The ability to create the community and the work that you want. Building the infrastructure to become successful yourself. If it weren't for punk rock no part of my life would be the same. I guess you could say that the tone of my voice -- of the tone of the show -- is gentle…the aggression was a huge part of what appealed to me in punk rock. It gives you power. But that's not the heart of it. On a surface level, I can understand why the incongruity might exist. But it's really more about the totality of it. That's what matters. Not the presentation.

I think punk made me want to question why things are the way they are. And how things came together like they did. And that seems very relevant to your show as well. In the past, you've said that you used Dischord records as a model for how Radiotopia (a network of listener-supported, artists owned podcasts) runs. Can you elaborate on that for me?

I always valued the simplicity in the way that Dischord operated. It was very clear cut with its artists. There were no contracts. It felt like a collective. Not everything has to sound the same but everything was vouched for. And I wanted that feeling for a podcast label as well.

There was a reason why I didn't form a company around Radiotpia and try to have a thing to sell. I wanted a project that nobody could own. I did not want to be anyone's boss. I wanted them to make the show they wanted to make. We would help facilitate them making enough money to do it. There is just sort of an honest accounting inside Radiotopia in the sense that… some shows are going to be big, some shows are going to be small. They all get basically the same deal. It's an honest reflection of the market and the demand. There is no artificial economy of venture capital that artists have to recoup and get destroyed by that.

I was thinking of you constantly when Spotify bought (podcasting company) Gimlet for $340 million dollars. The major label analogy is really easy to make.

There is a cost to it. I don't want to be brazen with that comparison. I don't want to say you're incapable of making good stuff if you have money or have a major label. The part of ownership that's important is the right to sell. The right to own your stuff so that you can get a reward from it. But what I do believe is that if you sell your audience, you sell your audience once and that's it. And now whatever company you sold your audience to, they have that audience, and you don't control that communication anymore. That communication to me is extremely valuable.

I mean, I happen to think that Jawbreaker's best record was their major-label debut. I think Jawbox's best record was their major-label debut. There is nothing necessarily that means commerce and art can't coincide. I actually think it's kind of lovely when they can. It's just that over time I think the independent model is the truest look at what is happening for people. And I think that's usually best for those people.

It's a pleasure to talk to you for a lot of reasons. I love your program but if you could look at my notes right now you'd see that I have the words JAWBREAKER written in all caps leading into my next question. I feel like you've covered some of it… but what do you get out of making your show independently?

Over time the meaning of that has changed a lot. There are two ways to be independent. It can mean not having a boss and not having people who depend on you. That's truly independent. I've never been truly independent because I always have people who depend on me. But the thing is… if you're going to have dependants -- which is important in life -- cutting down on your overhead of who is your boss is a nice thing to make yourself sane and make your choices a little more clear. When you're just serving your audience and serving the people who depend on you, that's enough to serve without serving a boss or a master. And so I think that's conducive to making the best work possible.

The other part is a version of betting on yourself. Because it means that you think this thing is going to grow enough in value that it's the right life trajectory to do this thing the best you can. If you have the skills and the inclination to make yourself a business owner in addition to being a creator of things… and really all those bands that did well independently ran businesses. Make no mistake. They booked their shows. They budgeted for their gas. They are business owners. That's why they made it. I know that's not super romantic but it's true. Someone was doing those things. Usually the bassist.

The thing I think people always missed about Fugazi is that…people we're always like 'aren't they so pure that they rejected all this major label money' when they were being courted during the heyday of bands being sucked into the major label system. The part people miss is that they were making more money as an independent. They were more successful than people probably realized. There was no offer that could be made that would be anything like the control and success they had living their own lives the way they wanted to. I don't think that the major labels made them an offer and they refused. I don't think it's just about ethics. It was about a rational choice. And it just so happens that I think independence is a rational choice a lot more often than people realize. Even if you're just thinking about a market economy.

Yeah. And I know that's not as romantic! I'm a producer of a show. And that means I create things for it. I write things for it. I voice it. I stand behind it as a piece of art. But the producer is the person who makes things happen. That's like the greatest job in the world. And I do that by making phone calls, by making sure people are paid, by making deals and writing grants. All of that is being a producer, and all of this is in service of the thing that we create. And no job has a higher value than any other job. Your job is to put a thing out every week. And so the business part of it is part of the art.

Thanks so much for doing this. And congrats on the success of the book.