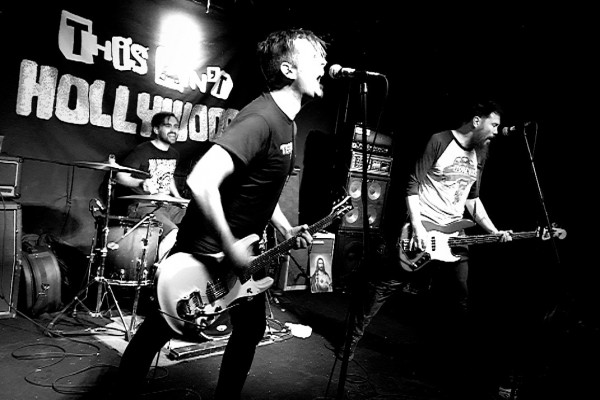 We're thrilled today to debut "Critical Excess," the first single from the upcoming third full-length from Toronto punks School Damage! The new record's due this summer, arriving in July through the Pennsylvania label Moms Basement and Italy's I Buy Records. The new tracks come in the wake of last November's whip-fast No Love EP and the late-2019 EP Fuckin' Rights. It'll be the melodic hardcore trio's first long-player since 2018's Hello, Cruel World.

Vocalist/guitarist Brad Manners commented on the new work, which again strives for a middle ground between pop-punk hooks and hardcore aggression:

"Lyrically, the songs are more personal and darker, which seem fitting in today's economic and social climate. This album serves as a byproduct of the times as well as personal growth during a social and mental collapse. This is probably the most raw and mature material this band has ever produced in its ten years of existence."

The members of School Damage waited out the pandemic with a few cool side projects. Brad Manners issued the isolation-era Bored to be Alive EP in June, remotely bringing together several guests (including members of The Vapids and Brutal Youth) as Brad Manners and his Issues. That set raised funds for the NAACP. He followed it at Halloween with the soundtrack-bound synth-driven one-off "The Next Day's Curse" and a scathing three-song EP as Atomic Wrong. That one arrived just this past February.

School Damage has been playing since 2010. The group currently features Manners, bassist/vocalist Jon Cabatan, and drummer Dennis Lee (formerly of Montreal's Boids and The Planet Smashers).

Streams: Stream the new EP from Talk Me Off!