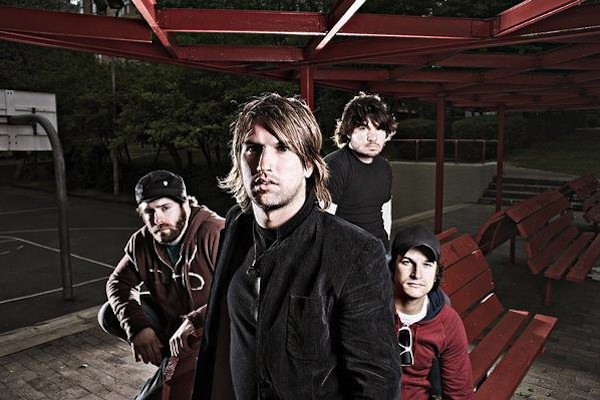 I had a quick conversation over email with Keith from Every Time I Die and he proved just as elusive, weird, and eloquent in the interview as his lyrics did on the record. 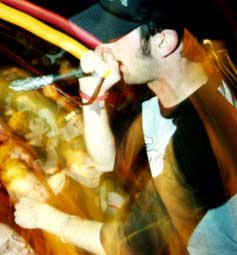 You've been touring like crazy; the recent Throwdown tour, and you guys are finishing a tour with FATA and Cave In and then joining Senses Fail and Saosin for what sounds like an unusual bill and THEN, you guys mentioned a tour with Poison the Well and the Bronx. Speaking of those tours, which is your favourite?

My favorite tour is the one where I go from my couch to the fridge, then from the fridge to the couch (which may have a layover in the bathroom). Unfortunately, it's a direct support tour so i'm not making any money on it.

It's a shame that Kid Gorgeous is calling it quits, but what's the rest of the Buffalo scene like these days? I live right across the pond in Toronto, and you guys have five times the hardcore scene we do.

Well, you would have a more affluent scene had you not positioned Third Reich dictators at your border. Buffalo, on the other hand, is a stagnant quagmire where we've found that any form of menial sucess is rewarded by old friends with virulent slander and besmirchment. I can't really comment on the state of music, because Buffalo is actually where I've been least throughout the 8 months of touring. i know that Tom Sartori is huge in the bar scene and a guy with a Jax Jaguars jersey and long curly hair plays at Merlins every monday night in front of 8 bottom feeding alcoholics that can lift their heads off the table only long enough to fart before passing out again.

Let's talk lyrics for a second. You guys have always been purveyors of the dry sarcasm, but a couple of tracks on the new record seemed pretty serious. Take "Godspeed Us to Sea" which sounds like the closest thing I've heard from you guys to a outright political song.

I can assure you that it is in no way affiliated with any political matters whatsoever. People assume so because of the state of our globe (but moreso my country) and tend to make direct comparisons to the questionable (to say the least) leadership that we're delegated to living under. That song, though maybe pertinent, completely overshoots the jurisdiction of any salient government and deals mainly with the oft inefficient and vulgar governing of the cosmos.

Ok, a potentially mechanical question; how does song writing work in the band? I once described ETID as a band defined by huge breakdowns, so I'm very curious as to how everything fits together. not too certain.

I really play no part in the song writing process. I can assure you, however, that it involves a lot of arguing, stubborn withdrawls and name calling.

People keep telling me that ETID sounds like hardcore with a southern rock influence. Does that make any sense to you? Are you guys big CCR fans or something? 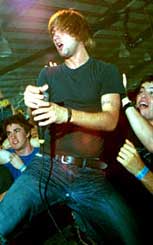 Not CCR specifically, but the grit of other southern rock bands is the one commonality that the band has. It's something we all appreciate and grew up on, in a sense; mainly because it was the type of music that made a coarse poetry out of nature. Any sort of country (not the cunt-pop that infests todays radio stations i.e Shania Twain or Reba or whoever) but the Merle Haggard, Johnny Cash, Hank Williams, Patsy Kline stuff. that also has the same meaning to me.

The "Ebolorama" video was one of the coolest videos I've seen in ages, how did the whole thing come together?

We had a lot of ideas; thing's that a lot of bands were unable or unwilling to try to pull off. It was just the best one we had.

So every independent band on earth is getting signed to Dreamworks, Island, etc. do you want to say something potentially incriminating, so that if you ever do sign to a major, people will never let you forget it?

Nope. I've said from day one I would sign to a major label if they came around. Ironically, they have and [we] have opted to stay with Ferret. I encourage bands that work as hard as most of them do, to sign with majors and i applaud those who have.

What have you been reading and listening to lately?

I just read Michael Moore's new book. i listen to the darkness 24 hours a day.

Any dedications, shout outs, last words or other things you want to share?

The hot dogs in Toronto are the best I've ever had. The street meat vendors are also the most polite.

Thanks for doing this, and good luck on all the touring.