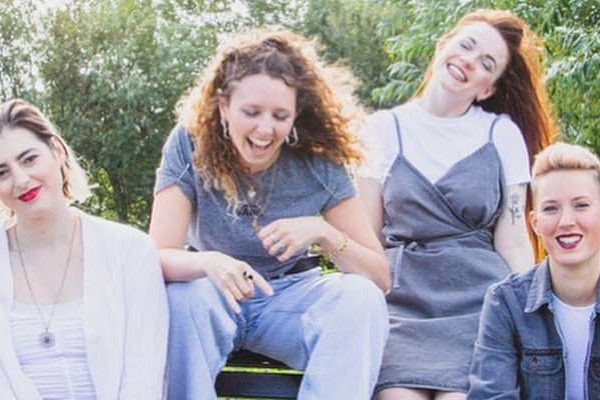 Dream Nails have announced that lead vocalist and founding member Janey Starling is leaving the band. A statement released by the band reads in part,

“Hi everyone, we are very sad to announce that Janey (lead singer) is leaving Dream Nails. As one of the founding members she has worked incredibly hard and brought so much to the band. We thank her for everything and remember five and a half years of the best of times and many milestones we will always be proud of. We can’t wait to see what Janey does next….As many of you know, Janey has relentlessly committed herself to feminist campaigns and sistxrhoods outside of her introducing the UK’s first press guidelines on how to report fatal domestic abuse. Janey will now be dedicating her punk energy to co-directing Level Up, a feminist community for people of all genders who want to end violence and oppression. Women and nonbinary people to the front!”

Janey Starling also released a statement about her departure from the band that reads in part,

“I have left Dream Nails, the feminist punk band I co-founded & fronted for the past 5 and a half years. It was my dream to start an all-women punk band, and it’s been my greatest blessing & joy to have been able to create music & music spaces where women and nonbinary people can safely express their collective rage and joy together. And that’s exactly what Dream Nails has done, going from basement shows to NME reviews. I’m grateful for the adventures and the opportunities to make courageous & important music and zines and to co-create so many joyful, rageful spaces with people across the world

Thank you to everyone who has supported Dream Nails & believed in the power of witch punk You are all such a loving, kind and committed community of people. Special love for all the survivors who have found solidarity, safety and survival in our songs and spaces. Your rage and your joy matters the most to me There are 2 specific songs about gendered violence - Payback & Joke Choke - that are deeply personal to me and it is my parting wish that these songs are no longer performed. I hope fans can understand this.

I’ve poured immeasurable amounts of heart, guts, time, vision, vulnerability, courage, laughter, magic and sweat (so much sweat!) into Dream Nails — and I’ve been rewarded with lifelong friends, sisters, community and endless inspiration in the beautiful people I’ve met on this journey. Thank you to everyone who has had confidence & belief in the DN vision from the very start (special shout out to @loudwomen - the first Loud Women was the first Dream Nails gig, flyer in second pic!)

For me, this band has been a labour of love, feminist activism and speaking out against violence against women. I’m still going to do all these things with all my heart, all the time, but no longer in Dream Nails.”

Dream Nails have announced that they will be continuing as a band and are working on their next album. Dream Nails released their self-titled album in 2020. Read both statements in full below.