Check out the new flexi by Time and Pressure! 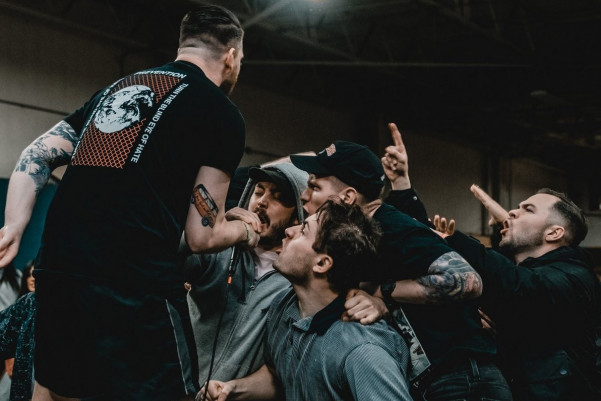 St. Louis, Missouri’s Time and Pressure released one of hardcore’s strongest LPs back in 2019 with The Gateway City Sound. The record mixed tightly woven and speedy guitars with screamed yet clear vocal cadences that created a sound that was at once aggressive, engaging, and well-written. And now they’re back with a new full-length LP due out this summer on Safe Inside Records. The new album, Halfway Down, is set for release this July but the band is also set to release a two-song flexi today via Wide Eyed Noise Records. Punknews' Mike Musilli sat down with Blake and James to talk the new record, the pandemic, and Midwest hardcore. You can pick up the new flexi here. Meanwhile, you can stream the two new songs and check out the interview below, right now.

What was the recording experience like for Halfway Down, especially given that The Gateway City Sound was two separate recordings on one release? Blake: Recording for Halfway Down was very interesting, I joined Time and Pressure weeks after The Gateway City Sound was recorded so this was my first time recording an actual LP. One thing I can firmly say is it was weird to record without Dave Shanle because he was in Qatar at the time so we had an idea of what the record would sound like but without all of Dave’s leads and such.

James: I think we were a lot more prepared this time around. We had to go up without David so I doubled up on guitars and he put his tracks down at a later time when he was home. I think the overall vibe of recording was a lot more relaxed this time around too. We had more time to spend on songs and add ons that we didn’t get when we did TGCS.

The guitarwork on this record has the tightly woven speediness of past releases, but there’s also a more prominent sense of melody as well (‘Theseus,’ ‘On the Waterfront,’ etc.). How did the writing process progress or change for this record? James: Halfway Down was supposed to be recorded back in April 2020 but when COVID hit we took that time to go through every single song and fine tune everything, make changes, and sometimes completely rewrite entire songs. Usually skeletons of songs are written by me or David, we bring them to practice and then they get fleshed out between members. I think we all took steps out of our comfort zone on this release by adding a lot more melody instead of just being straight forward like we have on past releases. David is totally the mastermind behind all of the leads and melodic leanings on this record. I’m more of just straight forward, fast guitars and he really brings it up to another level with his guitar work. Everyone stepped up their game on this release and I think it shows compared to things we’ve done before.

Blake: The writing process for this was normal but not at the same time. Navigating when to get together and write or practice amidst a pandemic was strange, but it most definitely gave all of us time to refine songs and sit down and really go through everything and that changed this record tremendously.

What are some of the thematic elements and concepts addressed on Halfway Down, both musically and lyrically? Blake: I would go as far as saying Loss is a thematic element in this record lyrically, from an outside looking in perspective because Drew Maxey does everything lyrically. There is more than one song that inhibits feelings of loss being ‘Throwing Roses,’ ‘Between the World and You,’ and ‘Old Scratch.’ All these songs somehow tie in loss or emptiness and I think its a recurring theme along with the title Halfway Down which references the final episode of the Bojack Horseman series, no spoilers though.

James: I can’t really speak on the lyrics but I’m sure its the same shit as always. “I’m sad. Wow growing up is sad. It’d be cool if things weren’t so sad. Wow.” I think there was definitely a conscious effort to take the music more seriously though. We pulled from some different influences this time around and I think it comes through on a lot of the songs.

What are the band’s plans as we move towards reopening out of the pandemic? Have you all begun figuring out booking shows, etc.? Blake: I think we are all on the same page that we want to get back to playing as many shows as we can when it is safe again. We have a couple shows booked in the later part of the year but nothing that we deemed too early and definitely susceptible to change. Luckily James handles all the headaches of booking shows and shit and he is a saint for that shit.

James: I’m actually moving to Cleveland in June so we’re gonna navigate the long distance thing for a while. As far as shows and tours, I have a short weekend booked for us in November but we’ll see if it actually happens. I think once the record comes out and we can see what we're able to do is when we’ll figure out if we’re gonna get back into our touring schedule or just continue writing for another release.

What’s the best/weirdest/most surprising thing you picked up or got into during the pandemic? James: Yo, I got REALLY into the Grateful Dead and hiking. Bought a bunch of their records, got really into the live sets, the whole nine. I spent a good majority of the Spring and Summer hiking through parks in Missouri and doing some camping. Once the winter hit I kinda stepped back from it just because hiking when its cold is ass but once we move to Ohio I’ll be spending a lot more time outside in the parks.

Blake: At the beginning of the pandemic I was just chilling and playing video games a lot but then I went out and bought another skateboard and started skating again. It was really cool because it was something I could do with some of the other guys in Time and Pressure. James skates sometimes, he used to all the time, Joel Castleberry, who does merch for us, also skates so it was just an good excuse to get to spend time with good friends.

Put us onto some great Midwest bands. Blake: Prevention from Springfield IL is sick, I really love End on End and that band doesn’t do anything bad, Prime from Louisville is really good as well. So many good bands coming out of Louisville right now.

Lost In Society release "Say Anything"