Buzz Osborne: Behind the Mumu 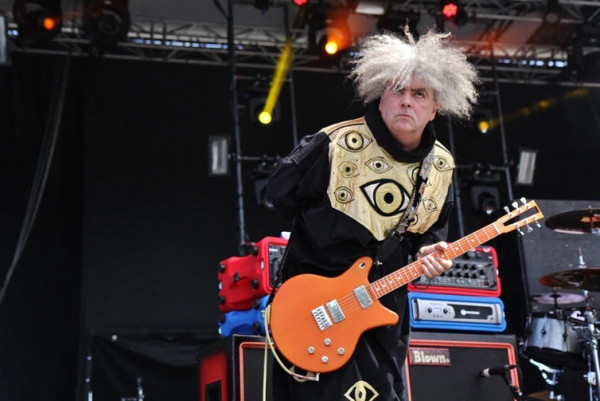 Today, The Melvins release their four LP behemoth Five Legged Dog. The album finds the band reworking THREE DOZEN tracks from their discography (along with a few choice covers) in an acoustic style. As with most Melvins projects, it's daring, unexpected, and kind of funny.

But still, as with many Melvins projects, the actual intent of the release isn't immediately clear, particularly considering the extremity of the album. Most bands, when doing an acoustic release, kick out 10 or so quiet numbers. The Melvins cranked out 36 and to boot, they aren't "normal" nice and quiet acoustic takes. These tracks are heavy and creepy sounding.

So, to try to get inside the minds of one of music's most mettlesome maniacs, Punknews' John Gentile sat down with Melvins guitarist Buzz Osborne to talk about the new LP, his background, and being nice.

Buzz Osborne: Behind the Mumu

Buzz Osborne will answer any question that you ask him. But, there’s the trick. His responses are direct, carefully spoken, and often short. In fact, because he usually speaks with a sort of force, you wonder if the question is annoying him, if he doesn’t like you prying into a certain area, or, maybe he talks with the same calculated intensity as he plays his music. That is, his responses are so direct that they often fulfill the question without providing elucidation.

For example, Buzz is quick to mention, “I’m nice to everybody… until they become an asshole. Once people become assholes, I’m done with them.” Buzz says that with such cold power I think he’s thinking about a specific incident. So, I ask him, “Buzz, who doesn’t like you? It seems to me like pretty much everyone that knows you, likes you. I like you!”

Buzz’s response? “Maybe old bandmates. Critics.” The fact that Buzz is concerned about old barbs from old band members, and what some knucklehead behind a computer thinks (…ahem…) suggests that he’s actually pretty sensitive. Now, if you ask an artist that is sensitive if he or she is, in fact, sensitive, his or her reply is usually, “No! I don’t care what people think!”

Buzz’s reply, as are all his answers, is more genuine. He says, “Yes. I’m sensitive. But, when I read reviews that are so wrong, so insanely wrong, I know I must be right.”

Frankly, you can’t argue with the logic. Now about to release album number- get this- twenty-five (which doesn’t include their multitudes of singles, EPS, and live releases), the band has thrived for almost 40 years while many contemporaries have withered away, be it via irrelevance, drugs, disinterest, or poverty.

To the contrary, in a way, they are speeding up. Before the pandemic, the band toured like clockwork, often playing over 100 dates a year. They’re louder than ever. Their recent albums have some of the most rapid tracks they’ve ever recorded and they’re regularly kicking out two to three albums a year. Meanwhile, on stage, Buzz is a sight. Clad in a colorful mumu, he rips on his guitar while thrashing his white corkscrew hair and howling in his ghastly tone. The mumus, by the way, are specially commissioned by Osborne (he has a mumu person) and are both functional and art pieces unto themselves. Osborne has stated that the main purpose of the mumu is to keep cool and loose during a show. I also think they’re a sort of a throwback to the era of “mean hippies,” when guys like the Mothers of Invention, the Fugs, and the Pink Fairies would wear dresses just to freak people out.

And, here the Melvins are, about to release album number twenty-five, a MASSIVE four LP set that finds the band reinterpreting tunes from throughout their catalogue in a mostly acoustic style, with a few cool covers thrown in, such as the Stones’ “Sway.”

It's remarkable considering that they are walking contradictions. They’re a punk band that plays really slow. They’re the grunge band that invented grunge even though they don’t sound like any other band called “grunge.” They’re the indie band that was on a major label and enjoyed the experience. They’re the metal band that once sold t-shirts that read on the back: “Q: Why did the metal head Cross the road? / A: Because he’s a gullible moron that will buy anything with skulls on it.” (That shirt, by the way, had a skull on the front).

But then again, is Buzz a contradiction, or is he just a really, really, really unique guy that won’t fit into any prefabricated mold you try to force on him. And if so, how do you make such a creature?

“I was born in Morton, Washington and I lived there until about Middle School,” Osborne says. “It was a very, very small town, but we lived near the center of it. Then, my dad’s job transferred Montesano, so we moved there. It was still a small town that wasn’t as small as Morton, but we lived on the outskirts. In middle school and most of high school, I had absolutely no friends.”

Roughly speaking, Osborne’s dad was a tree specialist- once lumberjacks cut down a tree, Osborne’s father, an independent third-party, would determine how much wood was usable from the tree, leaving it up to the seller and buyer to determine the value based on the calculations. His mother held various jobs, including working at the post-office, and being a homemaker. He has siblings, though they’re younger than him, which meant, in his pre-teen and teen years, Osborne was alone a lot of the time. As he said once before, “I didn’t like teenagers when I WAS a teenager!”

He spent his days wandering around the woods near his house, thinking about things, and shooting guns. “I’ve never had an aversion to guns,” he says. “I’ve always had them around. They’re a tool like any other tool that can be used for good or for bad.”

Young Buzz, er, um, “Roger,” was also a veracious reader. Sure, he read comics like any other kid, but he also devoured Jack London books, adventure stories, and eventually found his way into sci-fi. It’s a practice he maintains through today. He still reads constantly, though now he often focuses on biographies. He’s especially fond of a few books on Howard Hughes and Walt Disney.

In fact, there’s a sort of cliché in inner-Melvins fandom that the bands loves Disneyland. That’s only sort of true. I bring up the Melvins-Walt Disney connection, maybe in a ham-handed way. Osborne replies, “I’m interested in reading about Walt Disney… but that doesn’t mean I want to be like him. I certainly don’t want to be like Howard Hughes. But, I do like Disney. I haven’t been there in a while. I like the forced perspective of it. I like how it makes everything seem huge, when it’s not really that big. I like how the weird angles and perspective makes you feel like a kid.” Interesting that Osborne, who says he didn’t like kids even when he was a kid, likes how Disney makes you feel like a kid.

Near the end of High School, Osborne started a band with his few friends – Matt Lukin and Mike Dillard. Dillard was out a little over a year later and became a family man. Iconic drummer Dale Crover picked up the sticks and has been with Osborne ever since. Osborne and Crover are still pals with Dillard and sometimes still record with him as “Melvins 1983.” As to Lukin, who left the band in 1987 and joined Mudhoney? They are not pals so much…

“I still don’t have many friends,” Osborne adds. “But the friends I do have I’ve had for a long, long time. It’s quality, not quantity.”

Since forming, the Melvins have pretty much invented grunge and reinvented rock about six times over. Their iconic Lysol album slowed punk rock down to about a quarter speed and increased the massive heaviness, resulting in an abstract album of Sabbath meets Alice Cooper meets Poison Idea. The famed Houdini album, partially produced by Kurt Cobain, is often cited as a landmark grunge album… and every once in a while as the landmark grunge album (though if you ask me, it’s more heavy metal than grunge, but that’s a different discussion…) The Pigs of the Roman Empire album, recorded with sound-weirdo Lustmord, merges Melvins metal with super far out sound experiments. Pinkus Abortion technician asked “why can’t a band have two bassist play at once and also do a Butthole Surfers/James Gang mashup?” The answer was, “it can.”

And now, with Five Legged Dog, they’re reinventing themselves. The album is a massive QUADRUPLE set where they re-record acoustic versions of their own songs chosen from their 40 year career. They also throw in a few choice covers, such as a soulful take on the Rolling Stones “Sway,” (sung by Melvs bassist Steven McDonald, a Brainiac cover, a Warren Zevon track, and also a re-work of one drummer Dale Crover’s own solo tunes. It’s a wide-ranging set that, as with many Melvins projects, is open to interpretation as to meaning and purpose.

“I was going to tour off of my second solo album, which was acoustic. I recorded that with Trevor Dunn,” Osborne says, clearly frustrated that his plans had been thwarted. (Famously, unlike many other disorganized, chaos-bands, the Melvins make their plans two years in advance.). “But, the pandemic got in the way and I had to cancel the tour. So, during lock down, we decided to record these songs. A single album seemed cliché. A double album… well, that’s common nowadays. And if you’re going to do three LPs, you might as well do four.”

One does wonder if many of the Melvins stranger ideas don’t have some grandiose, high falutin’ concept behind them, but really, are just experiments or impulses- which arguably, is the highest platform of art and expression. The album itself does seem to play with contrast. “Hung Bunny/Roman Dog Bird,” an earlier Melvins classic renown for its sheer heaviness, is, of course, acoustic here, but the band attempts to take the dread and the menace from the electric version and recreate it through tone, intensity, and ambiance. They succeed. If anything, the band seems to be arguing that the darkness, and the humor, and the weirdness, and the infrequently “normie” aspects injected into their tunes don’t come from technology, it comes from the human themselves. As Osborne has quoted previously, “it’s the Indian, not the arrow.”

That being said, this is the first full album where the Melvins have stepped back and looked over their own catalogue (though, they have re-recorded some of their own tracks previously). So, what does it mean that the band is revisiting their own work with such intensity? What is it like to go back through one’s own past an evaluate it?