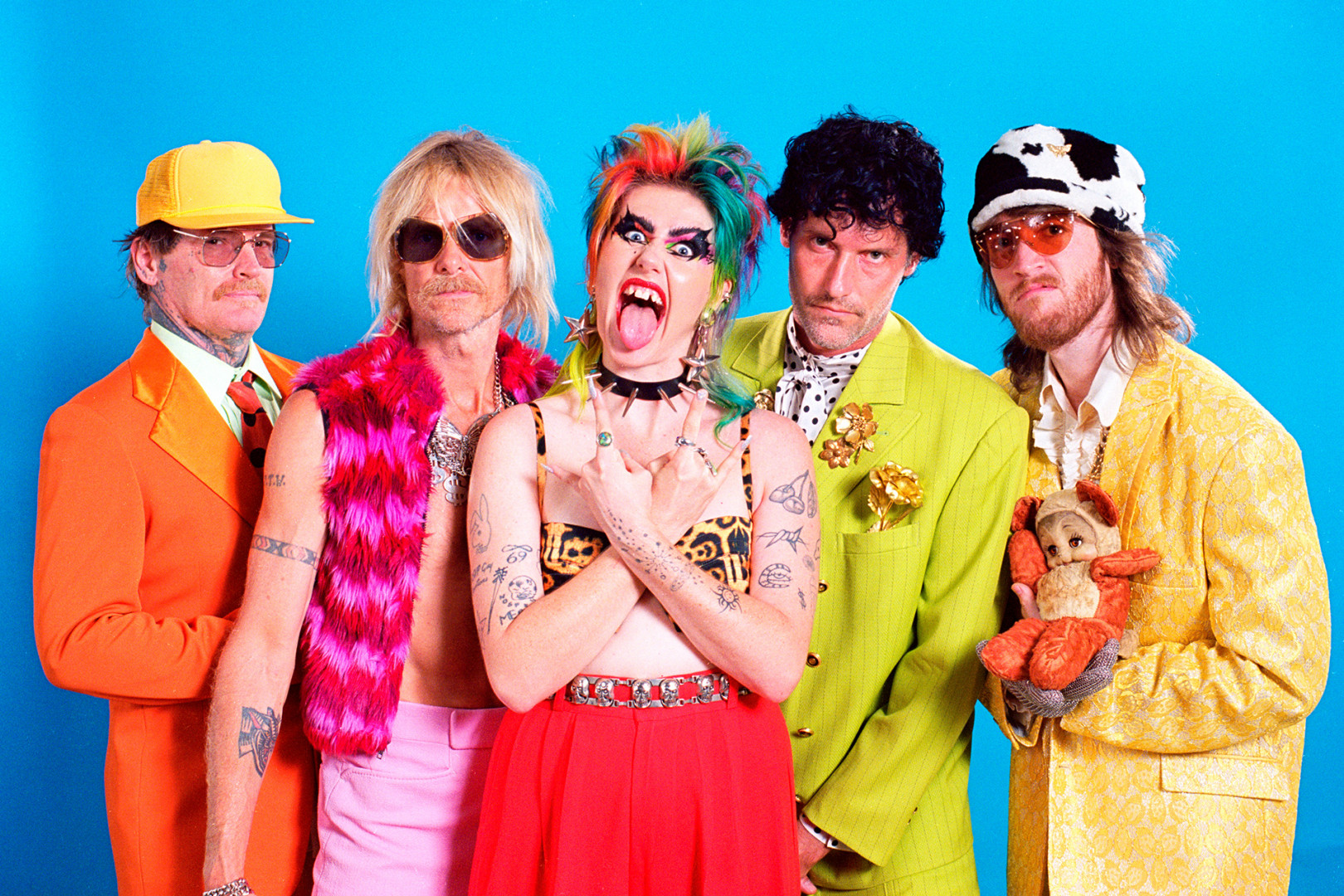 by John Gentile Interviews 39 weeks ago

Surfbort are looking on the brighter side of things. While the band's excellent first album found them thrashing abound during the destruction of the world, their new record, Keep On Truckin' is a bit more positive- even if it does have songs about "white claw enema bong hits" and eating yourself to death with junk food. The new LP, which was recorded with Linda Perry, has the band looking through the chaos of the world and finding the spirit to push on through the band times, all while spreading love to humankind. Also, it is frikkin' great.

So, Punknews' John Gentile spoke to singer Dani Miller about the record. Also, the band just released a video for "Killed by food"! You can check out the video and interview below.

Dani Miller has found God… well, sorta…. In a manner of speaking that is…. Like don’t get hung up on the specifics, man…

“Yeah, it was like I was walking down the street and there he was and he seemed pretty cool,” Miller says. “No, not like that! It makes me sound like a total Christian girl. I didn’t find God in this white Jesus savior person, I just found a higher power… At first, I thought of ‘God’ as a sparking unicorn in the sky. That’s how it started. It wasn’t really like a single moment where it happened. I was just practicing talking and having conversations with ‘God.’ There are definitely powerful forces beyond humans happening. I mean, I’m not into religion at all. I hate that shit. I don’t really support the Catholic church or anything like that. I respect peoples’ religions and thoughts on that, but I think it has brought so much more harm than good. I realize that I sound like a total psycho, but it really helps- just realizing that I’m not fully in control of everything going on.”

Indeed, like many people, Covid through a wrench in Miller’s and Surfbort’s plans. The jolt of a Biblical-level pandemic radically changed Miller’s life. She had just moved back to California after being in Brooklyn for over a decade with plans to work on Surfbort album number two, and then…

“I was flying like literally every other day, DJing for Gucci, doing shows with Surfbort, when suddenly, the apocalypse happened!” Miller says. “I was always on the move and then I had to suddenly just stop. I had time work on myself, to meditate. Before I didn’t have anytime to reflect on anything and during the apocalypse that’s almost all I did.”

If you check out Surfbort’s movements before Covid, it was a spastic blast of release after release. The band formed in 2014 at a party in Brooklyn and then rapidly began to kick out 7-inch after 7-inch. The band’s lineup congealed with Miller on vocals, Alex Kilgore and Matt Picolo on guitars, and Sean Powell (who was in Texas 90s punkers Fuckemos) on drums. The initial strike culminated with 2018’s fantastic Friendship Music album which was released on Julian Casablanca’s Cult Music label.

That album was raw and ragged in a Dangerhouse meets MDC vibe. The LP found Miller howling about how much she hated Trump, drugs, and the big hit “Les Be in Love," stretched out the chorus to the edge of infinity.

The band’s rise was aided by the live show. While the band would smash out their tracks, Miller would scowl and spit like she was crazy (maybe she was) and frankly, people didn’t know how to handle this young lady who was totally spazzing out. All of this was doubled by her wild appearance- sometimes she looked like a David Bowie that hadn’t showered for a week, sometimes she looked like Su Catwoman minus the high fashion backing, and sometimes, dressed in torn animal print, with a roughed up mullet, and dangly earrings that went past her shoulders, she looked like Kali incarnate. All of those visages of Miller did include a few similar features, though- each aspect featured her crazed eye stare, an open set of choppers ready to bite anything that’s near, and a waggling tongue that would make Gene Simmons quit his day job.

She says, “I just followed Matty and Sean and Kilgore at first. They’re from the Texas and Bay Area punk scenes in the ‘80s. Let’s go hard! 40 seconds songs! Yaaarg!!! I’ve always been vulnerable. Sometimes I would cry on stage.”

But the weird part is that wazzed out/cranked out/freaked out Dani Miller isn’t the result of drugs… it’s the result of an absence of drugs. Surfbort formed on Miller’s 21st birthday, the day she decided to quit drugs after years of abuse.

Her early and mid-teens in California had been rough. Her family fell on hard times financially when the auto market and housing market crashed (her dad sold used cars and her mom was a real estate agent). So, her dad moved to the East coast to be a movie teamster to make some cash. Meanwhile, Miller had few friends and often got picked on in school.

Miller says, “Growing up, I was weird loner. I had strawberry-orange-brown hair and people hated that for some reason. I guess I was kind of ginger and people were like, ‘fuck you!’ I would hang out with the photography teachers. I remember my English teacher in maybe freshman year of high school, he would play Twin Peaks for me during lunch. I was like, ‘sweet, I can just watch Twin Peaks and be safe. Once I realized that I couldn’t fit in, on like a Tuesday night I’d drive to LA. I’d sneak in to see a show and party all night, and then drive back directly to the school parking lot in the same shit I was in the last night and then cheat on my homework and still get an A and do the same thing all over again.”

As Miller puts it, the shows that she saw were “terrible, terrible shit” that she can’t even remember now. That is, she wasn’t going to shows to see cool bands or socialize, she was going to just go.

She adds, “but then when I started to do drugs, I felt wanted. Being a loner reject kid made me into a drug addict. From 17 to 21 I was doing heroin, meth, crack, like really bad shit. There was a time that I was on the brink of death. You feel like you’re in jail, a body jail. I felt so hopeless and so crazy. ‘Fuck it! I want to do all the drugs in the world because I wanted to disappear!’ I was almost in some sort of psychosis. My mom has voicemails of me screaming that I want to kill myself and I don’t even remember that. So, yeah, crazy dark times.”

In fact, that sort of where the new Surfbort album picks up. The first album focused on the machinations of political powers and how to exist in a continual state of nihilism, more or less, but the new album, is kind of lovey dovey and focused on self-care… even though it frikkin’ rocks the hell out.

The first track opens with a decade old phone message- it’s a police officer calling Dani Miller’s mom letting her know that her daughter has been drinking to vast excess and is in the hospital. So, you’d think the following song would be some sort of melancholy song about pain and/or healing. Nope. It’s called “FML” and the main refrain is “fuck my life, I want to kill myself!” It’s a combustive storm of a punk track and it’s a bit more transparently personal than the songs off the first album.

Along with that, there is also a significant change in songwriting style. Thankfully, the band still is and sounds ”punk,” as cliché as that is. (That is, they didn’t go the punk-band-is-now-indie-rock route.) But, the songwriting here is deeper and the sound itself is even brighter. “Cheap Glue” nods to David Bowie’s glam days and Nirvana’s ballad type tunes. “Open Your Eyes” has the jangle of Replacements. Still, stompers like “White Claw Enema Bong Hit” and “Killed by Food” are straight up hardcore blasts.

So, um, where did the inspiration for the “big new sound” come from? Uber producer Linda Perry, of all people. Miller ran into her at, ahem, a Cheap Trick and Nirvana show that wasn’t Nirvana and Kurt Cobain was actually St. Vincent and Beck and John Travolta were there… you have to ask Dani about that one. At any rate, Perry wanted to produce Surfbort, but get this, Miller said “no” (for the time being) because she wasn’t ready.

Then, mid-Covid, after a good amount of reflection, Surfbort hooked back up with Perry and began to record at Perry’s Greenleaf Studio (which is also a house). “We had like 100 songs,” Miller says. “We hadn’t made an album since 2018. We kind of hit all these walls. We don’t have a label or money or savings. We’re just going for it. During the apocalypse our management was weird and not helping- not to talks shit. So, a lot of it we would bring to Linda, and it would be the manic songs like “I want to kill myself!” which were like 40 second punk songs. She took them and rearrangement them and made that into an epic ballad. Linda has an insane guitar and amp collection and she has a pool in the house. So, between takes I’d run and jump in the pool. It was awesome.”

Both Miller’s new sense of self-reflection and Perry’s songcraft drive album. Sure, the self-destruction is still there (and it’s even sometimes saluted), but there’s a certain sense of self-care, and maybe more importantly, care for others in the music.

Miller reflects back on the lyrics and how the album starts with a audio document of Miler at her most self-derstructivr: “I’ve been extremely suicidal and completely losing my mind. I had no hope. When you’re in that mindset, you don’t see the good times that are on the way. I kind of wanted to take that and say, ‘you can get through this!’ Looking back on those times. I’m so glad I pushed through those crazy dark suicidal times and tried to make talking about it not so taboo. If you’re feeling that way, it’s okay to feel super hopeless. You just gotta hold on to the next thing because magical shit is in the future. Work sucks. Life can suck. Let’s dance!”