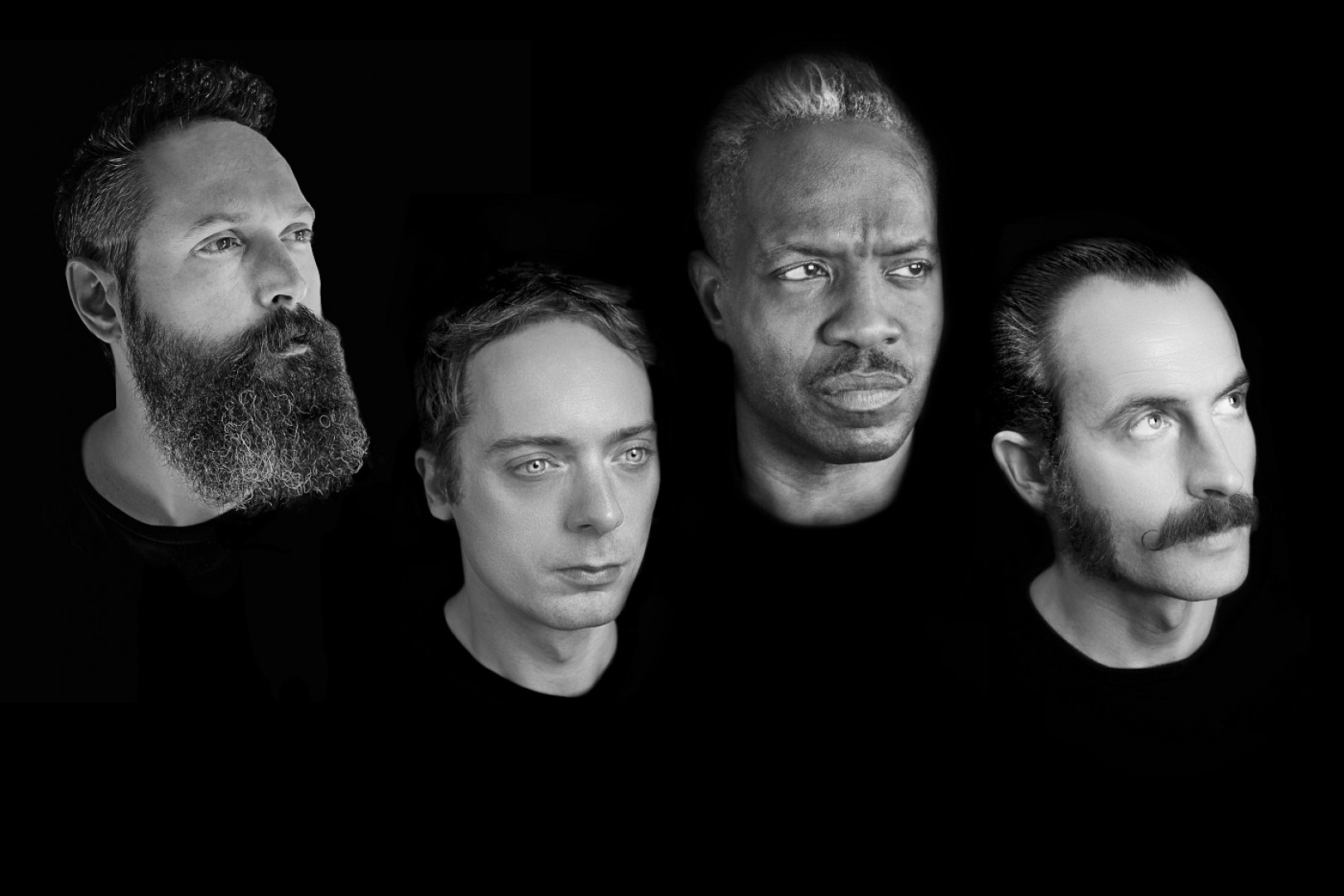 by John Gentile Interviews 14 weeks ago

The last time I saw Eugene Robinson in person, he was kicking some dude's ass. So, this time, I provided a safety shield formed from technology and 3,000 miles. You see, since our last meeting, Eugene has gone through a lot.

For one thing, he just finished his trilogy of records with Buñuel. Buñuel is Eugene howling and screaming and singing while three paisans play super nasty avant-garde noise rock. It's pretty rad. The new album Killers like Us is out today.

Eugene goes into detail at his Substack. But before you dive into that, you can check out my interview with Eugene below.

As the public record has shown, 2021 was a turbulent year for you. Eugene, how are you feeling in 2022? I’m feeling pretty good. What’s sort of amazing to me is that there were some people that completely misread everything that happened in 2021 that was non-disease related. It was super vindication for me, which was published in the New York Times and my substack. There was financial chicanery and my bosses allegedly trying to defraud Goldman-Sachs out of 40 million. It was a nice consequence for their actions. People just thought I was joking when I was muttering about how miserable my situation was. It was nice to see that vindicated via Forbes, Fortune andInk Magazine. It was of interest in Silicon Valley and now it’s being played out in Hollywood and in documentaries…

I was particularly intrigued because we often think of you as a pretty tough guy that doesn’t take shit from anyone, and here, you had to answer to these creepy bosses all the time. The reality of it was, at one point when Danzig got knocked out on that famous video tape, somebody from the record label- it was Mark Thompson from Hydra Head- he said, “would that screw up your stick?” to me. I said, “no man, I’m not representing myself as an ultimate badass, just an artist, and I like to see the art proceed without interruption.”

The part that I fight is immaterial, so it isn’t built into the equation- or not as significantly as, say, Rollins was. I’m not a masochist and I saw a video where people are spitting on a fetal Rollins- that’s not my style. I don’t enjoy that action. I say that after going seven days in a row of jiu jitsu without a break and my back is aching.

Somebody made some crack in the comments. Well, yeah bro, I got four kids, I’ve got a house and real adult responsibilities and I do stuff that you wouldn’t ordinarily do. I read with great interest about guys that are in our neck of the woods- from Steve Austin talking about having to borrow money from his son, to people having to get real jobs, to anybody who thinks if music pays.

My attitude has been losing fights has framed who it is that I am much more significantly than winning anything has- the bad things that have happened in my life have made me develop a much stronger resolve. If you have something really horrible happen, ex post facto, I say, “that’s not gonna happen again.” But with really good things, you’d be really lucky to have them happen, but it doesn’t develop your resolve, so you just sort of accept it as happening and don’t change yourself.

The new album has a track called “When God used a rope.” You described the song as, “The disgusting way that the human is repackaged and fetishised begs for a re-rendering that captures, at least in micro, how much of being human is mired in the ways in which we are failed animals.” So, do you think humans are inherently despicable things? There is a grace and beauty in animals that are completely absent in humans, but the reality of it is, that’s what make humans so delightful- our lack of grace as we move through life and, in instances we do manage to touch it, and when we do, we lionize it, most typically artists and athletes, but humans are also completely disgusting pieces of shit. When bad things happen to you, you start paying attention. I started to pay attention to signs and signals. Bad stuff happens to animals all the time. A lack of foresight or after sight will kill you if you are a deer.

With your discussion of “foresight,” do you mean tangible, learned experience- like “tech business investments are very volatile”- or more like sixth sense, cosmic awareness? I’m talking about both. I pay attention to both with great regularity. Mcgruff the Crime Dog says, “if something doesn’t feel right, it probably isn’t” or he says, “if something seems too good to be true, it is.” My thoughts border on a certain superstition. If I was paying attention when I went to see, in the ‘80s, the Clash film Rude Boy and after listening to Concrete Jungle like 12 times in a row, which ended up with me going to a hospital, maybe I could have avoided those things.

You’re going to have to give us more detail about that. I got into a massive fight in Bay Ridge. This is before I had adopted the New York thing- “that’s none of my fuckin business.” I got into a fight with three cugines and got my head busted with a bottle. Before that, I was willing to accept the “idea” that because there were three of them and the last guy had shown up and he had an attack dog and the fight had nothing to do me, that I just happened to be there… when my head got bashed in and the cartilage in my ear dripped out and I flipped out and chased them into the movie theatre and ended up beating the guy by the phones and then had to go to the hospital and my ear still causes me problems to this day.

Actually, you mentioned the early days of punk rock. When people salute the early waves of American hardcore, they always mention Ian MacKaye and Black Flag and Jello, but you never get mentioned and you were there in Whipping Boy! Does that bother you? I’m not big on nostalgia. If Whipping Boy had happened six months before it happened, the tone and the timbre would have been different. Most of what people hear of Whipping Boy was from Not So Quiet on the Western Front which had happened during the hardcore explosion. We were touring the country in a pickup truck in ‘81 or ‘82, so well before Necros and Negative Approach and Meatmen had gone on tour. The Boston guys gone from Boston to DC. I don’t know if anybody from the West coast had gone as far East as we had gone West. In terms of what could have happened, I don’t think too much about it. In the scheme of things, honest to God, take a band that I like, the Necros- the Necros were much better than Whipping Boy. It would have been too much of Cinderella story for my second band to be “great.” Whipping Boy was your second band? What did you do in the first? It was called Al and the Xs. I played saxophone.

I didn’t know you knew how to play the sax! I didn’t. I took the hardcore ethos.

The new album has some really beautiful singing in it, which deviates from the nasty crush of previous Bunuel releases. That’s Kasia Robinson. I think what’s noted is that she sings for a polish band called Maneki Nekro and she is also my wife and we just started to do it with a song on the LP. I was hearing her voice in my head on the first record, and I was thinking I want to do something like that. So, the guys would send me music and I go into the vocal booth and I won’t leave until I sing every single song. I could be in there four hours- “How could I get through a three or four hour recording session without destroying my throat?” So, I really like her take on the track and her take on the melody and we continue to do it because it creates a chaos element, because you don’t expect it in the third record,

Why do you rip out all of the songs at once? Well, because I’m old. Fundamentally I still think about music in terms of albums. I have not been algorithm-cized into just thinking about a song. I still think about albums like a book- it’s enjoyed as a piece. The first time I get a record, I listened to it as an album and then later I put it on shuffle,. I was talking to Ian [MacKaye] and he was saying what he does with his vocals, is he takes a mic and records them sitting next to the engineer. I said, “why do you do that?” And he says, “these songs are meant to be played in front of an audience.”

My attitude is that what happens at a live show is that you are being made privy to a space inside my head and I want you to have fully privy. I don’t want people to ask me about my food order or check my stuff or be talking about whatever when I am recording, I really want to be adrift in a sea of whatever we are trying to take from the beginning to the end.

Music: A Few Too Many: 'Out For The Count'