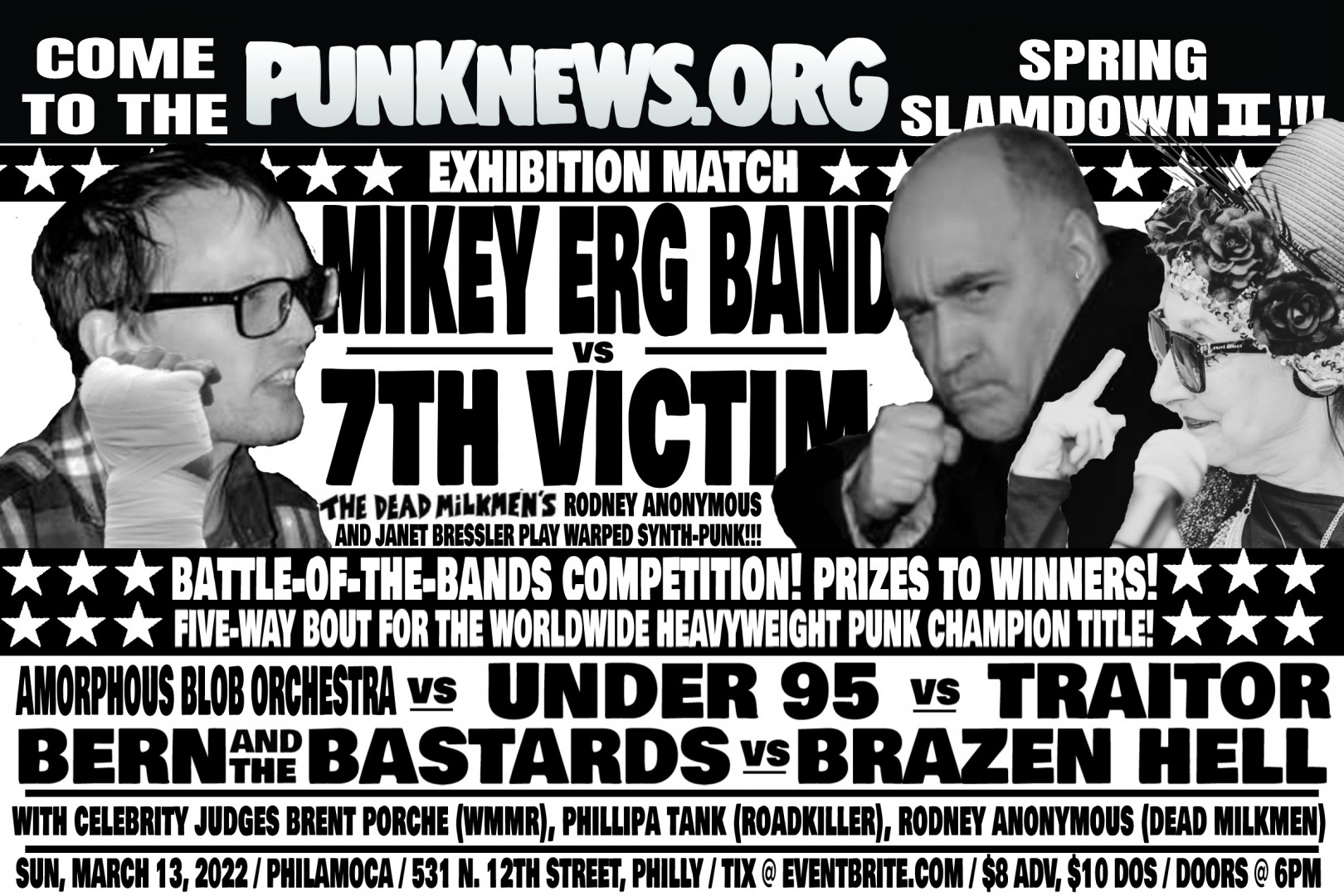 Philadelphia… Let's get ready to RuUuUuUuUummmmmmmbllleeeeeeee!!!!!!

That's right! On Sunday, March 13 there will be a battle for the best like the world has never seen! It's the SPRING SLAMDOWN 2!!!!!

We have got two MASSIVE HEAVYWEIGHT CONTENDERS at the top of the bill. In a glorious exhibition match, the full electric Mikey Erg band will be slugging it out with 7th Victim, the warped synth-punk band headed by Rodney Anonymous of Dead Milkmen and Janet Bressler! This will be a ten round, knock down, slug fest, fight-to-the-finish battle that will amaze your eyes and leave your mind blown! The pop-punk kids versus the industro-punk titans! They're sure to leave it ALL in the ring! Who will win?!!! WHAT. A. MATCH!

But, that's not all… before that, five, count 'em FIVE bands, will compete in a five-way bash-o-rama battle of the bands to win that most coveted, rarified, vaunted title… THE WORLDWIDE HEAVYWEIGHT PUNK ROCK CHAMPION BELT!!!! The title has been vacant since Spring Slamdown 1 and there are five hungry strikers looking to claim that prize!

Under 95 kick out racing skate punk! Traitor thrash it up and smash out that metal riffage! Bern and the Bastards crank out gothed up pop-punk! Brazen Hell whip out crushing Motorhead style punk! And then there's the mysterious contender known only as "The Amorphous Blob Orchestra…"

Plus, we've got three celebrity judges deciding who wins and who LOSES. Behind the table are: Brent Porche of 93.3 WMMR! Phillipa Tank of Roadkiller! and… the main man himself, Rodeny Anonymous!!!

This historic bout will be Sunday, March 13 at the beautiful Philamoca arena in Rocky's hometown, Philadelphia! Address: 531, North 12th street, Doors are at 6pm and the first fight bell is at 6:30 SHARP. Do NOT be late! AND! Tickets are only $8 advance! Wow! See you there!!!!! GET TICKETS HERE! CHECK OUT THE FACEBOOK EVENT HERE!

In Memoriam: Dallas Good of The Sadies has passed away