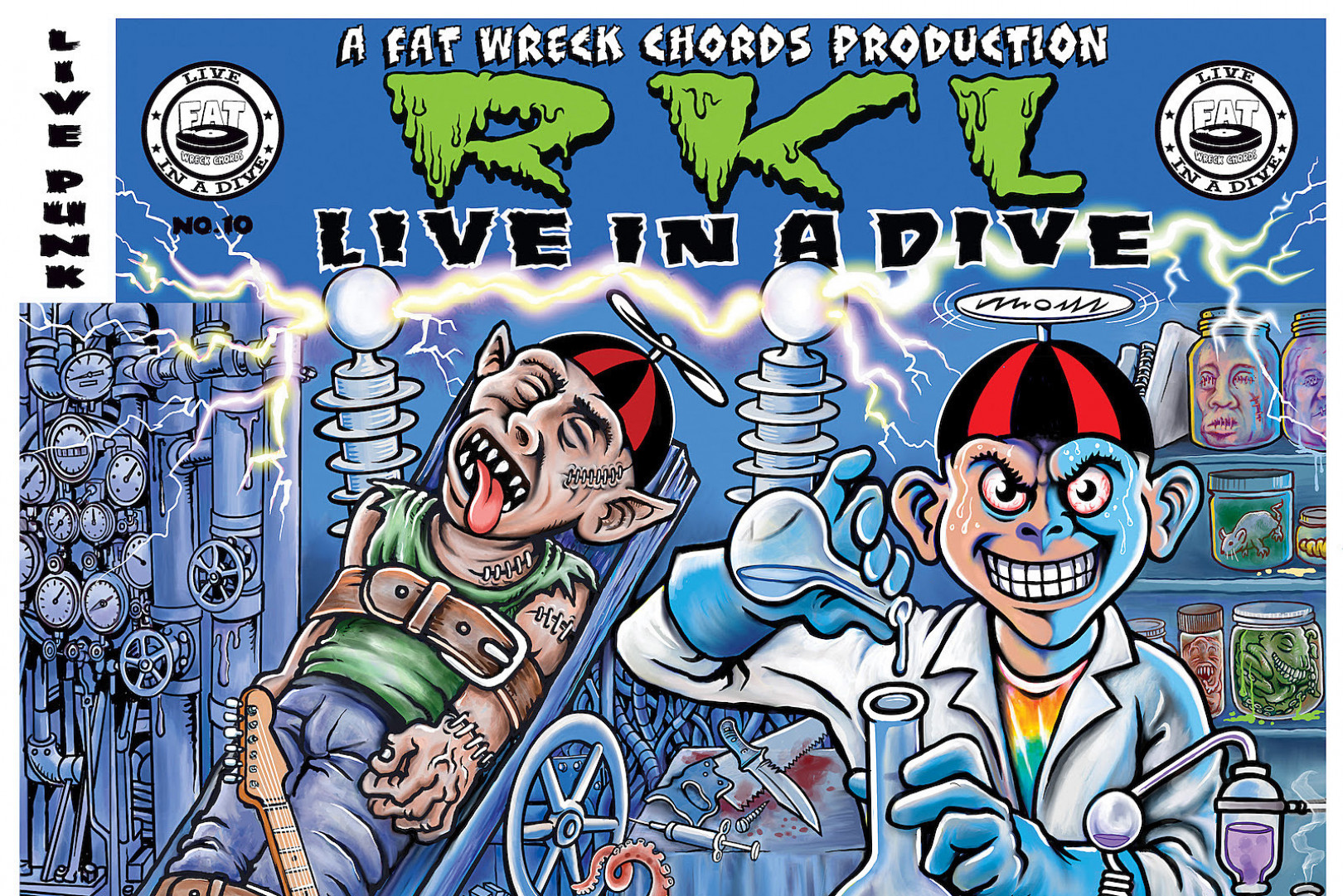 Fat Wreck Chord’s tenth installment of its Live In A Dive series features legendary early SoCal punk band Rich Kids on LSD who have unearthed tracks from their archives for the 17 track live album, ones that were recorded over thirty years ago and never previously released to the public.

In order to get the scoop on the release, Punknews' Rose Eden sat down with iconic guitar player Chris Rest of RKL,Lagwagon, No Use For a Name, (among others) and the sole constant member of Rich Kids on LSD to talk about the band’s early influences, getting snubbed by the punk media, tour life in the 80’s, and his biggest regrets.

Originally Chris Rest didn’t realize that the band even had the master recordings in their possession until sometime last year when former guitar player Barry Ward’s hoarder-ish tendencies came in handy. He had saved all the band’s old flyers, posters, deadstock merch and archival tracks, including the set recorded at the famed Eindhoven squat-turned-venue in De Efenaar, Netherlands.

“He’s the one who kept track of everything and archived every thing” Rest said. “He said, I found this tape from the Eindhoven show in 1989 but it’s all still separated, and I said let’s see if we can re-mix it, have it mastered and release it because I remember it was a good show and we were kind of at the top of our game at that point in our career, so it all worked out.”

After having a friend from the Pacific Northwest hand mix and re-master it, the live album was then sent to Fat Mike of Fat WreckChords to gauge interest. Naturally, he was immediately excited about the material which, ironically enough was actually recorded by the venue’s staff that night, with the band having no previous knowledge of it until after their set was complete.

“I don’t know if they even asked if we wanted to, but they were nice enough to hand over the tapes.” Rest said with a laugh, and went on to explain that despite hiring mobile rigs to come to their shows and record live the previous year, (resulting in RKL’s two live European albums from 1988) the shotgun recording at the squat came out much better than the previous two they had booked and paid for, as well as representing a more accurate version of how the band sounded live in those years.

“People always said that we were a great live band and I always had felt that all of our recordings and studio stuff that we’d done so far were kind of not up to par, like, the Rock n’ Roll Nightmare album was a cool record and all but we didn’t even have a bass player at that time and had barely rehearsed in the studio at all. We had pretty much learned those songs on the couch, then went in to record them with our drummer Bomer playing bass and drums.”

Mind you that at this time in the eighties there wasn’t a band member over the age of 21 or 22 years old, some were still in their late teens. By 1989 roughly half the group had spiraled out of control with hard drugs and drinking that eventually proved highly detrimental to the band. As the only original member consecutively throughout the years, Rest found solace despite all the chaos, addiction, and exhaustion through the grateful naivety of youth:

“We had no idea what it was like to tour on a bus. On our first US tour, we shared a van with Dr. Know, so it was two bands and all of our gear in one van, we didn’t even have a trailer. Then again, the same thing - both those first tours through Europe were in a van with the gear and we just thought that’s how it was. You slept sitting up, you slept on floors, sometimes we’d splurge and share a hotel room so it was pretty rough. And then the partying was pretty out of hand, drinking European beers - every night was just chaos.”

Located in Eindhoven, Holland, De Efenaar was a well known squat house in the area but to Rich Kids on LSD, it almost felt like hitting the big time. Playing mostly in basement or tiny club spaces with low ceilings, cramped quarters, and shitty acoustics, the cavernously dilapidated building had real lighting, a decent PA system, and a capacity that held at least 600, possibly up to 800 individuals according to Rest, and on that particular night RKL had managed to pack the place.

“I remember being pretty overwhelmed by all the people and how everyone was just so into it… it was cool.” Rest reminisces.

With 17 tracks in total, RKL’s setlist that night in Holland was composed mostly of songs from their eponymous 1987 album, Rock n’ Roll Nightmare. Die-hard RKL fans may recognize “Rumors”, a track which up until now solely existed on one of the live ‘88 recordings on Live In A Dive, one that had never formally been recorded in a studio much less mastered until now. Interestingly enough, on the original 1988 version of “Rumors” the vocals had to be overdubbed after the fact due to them not even being written at the time of the live recording.

“That song is kinda nuts. We were really going for it in terms of technical riffs and chord changes at that part of our song writing” Rest recalls.

Citing The Bad Brains, Youth Brigade, plus Battalion of Saints as major early influences, RKL absorbed much of the culture around them playing shows with all the bands local to the early Ventura and LA punk scenes. Aggression, TSOL, Circle Jerks, Black Flag, Suicidal Tendencies, and Wasted Youth were some of the other names Rest listed off before divulging that a love of classic rock also had it’s own influence on the band. Kiss, AC/DC, Judas Priest, Iron Maiden among others heavily ensconced the aptly titled Rock n’ Roll Nightmare years, despite most of the band being bullied, ironically, by hair metal kids in high school.

Fans of Rest’s other band Lagwagon may remember their original drummer Derrick Plourde, whose style was heavily influenced by RKL’s Tasmanian devil of a drummer and sometimes singer, Richard “Bomer” Manzanullo.

“You can hear it in how tight the drumming was in the first couple Lagwagon albums, how Derrick - his kick pedal patterns and like how he really paid attention to being aggressively… having those double foot things that most people weren’t doing at the time” Rest explained. “And I know that Chris Flippin and Shawn Dewey were RKL fans as well, and just being from Santa Barbara we were an influence on all of the early punk bands in the area at the time, even though we weren’t in the first generation of punk bands to come out of Santa Barbara.”

“I was pretty much just a clueless kid back then, I don’t know… I still kind of feel like the same person and I obviously don’t party like I used to party but besides that I don’t feel that different. I don’t know like, age is weird, I still feel like I’m the same kid in a way… it’s hard to believe I’m almost 55.”

When asked if he’d do anything differently looking back after nearly 4 decades, Rest admits that RKL disbanding is one of his biggest ultimate regrets. Bomer, he explained, was such a visionary that his ambitions actually left him polarized in a way, which was emotionally crippling for him. Wanting to take the band to levels far beyond punk rock with visions of epic, orchestrated productions in the same way that Freddy Mercury or Rob Halford might wizard their music, Bomer almost had too much potential back in those days, and was without enough outlets for it to siphon all through.

“He would wake up in the morning and have a song fully written in his head already, and you know, when you have that sort of vision and then other people are playing your music, it’s never going to come out the way you hear it in your head, and I think he felt that Jason (Sears) was holding us back. He was a real Darby Crash style vocalist you know, but no one had the stage presence… he had such charisma. He could really control a crowd, or get them amped up. It’s an art in itself, just that.”

Bomer died died due to heart failure at his home after a long time battle with drug addiction. In 2006, Sears died of of pulmonary thrombosis in a detoxification clinic in Tijuana, Mexico. Of course, Drugs were one of the main causes of the band breaking up. Naturally, Rest expressed regrets about it all, how there were many things he wished he could have done better, but most of all just how much he missed them both.

“Every time we broke up, drugs had something to do with it.”

When asked what he’d like the world to know about Rich Kids on LSD, he laughed and stated that most of the tshirts out there are bootleg, but followed that with the more sobering fact that they were way underappreciated when they were first around. They weren’t mentioned in any of the fanzines, and were consistently overlooked as one of the major California bands to come out of that area during that time.

“They always mention D.R.I., and a lot of the bands that were in our same circuit, but for some reason, maybe it was because we were from Santa Barbara, people didn’t feel that it was a place for a legitimate punk rock band to be from, but I’m not sure.”

“The first review I ever read of our band was from Timmy Yohannan, (of) Maximum Rock n’ Roll, and I was so excited, and the first thing he says is: ‘Heavy metal grrr-rawr, I choose not to listen to it’ and I was like, devastated, you know?”

Definitely worth mentioning is Live In A Dive’s incredible album art created by longtime RKL cover artist Dan Sites for this tenth installment of the ongoing Fat Wreck Chords series. Recently, Sites sat down with both Rest and Fat Mike for his Fat Mike’s Fat Mike interview series to talk about both his lengthy career as an artist and his retirement due to terminal illness, making this album cover art (most likely) the last he will ever do.

Rich Kids On LSD’s brand new live album originally recorded in 1989 for the Live In A Dive series is out Friday June 3rd, 2022 and it’s hard to say whether this material is more of a resurgence of lost relics of the past, or a memorial to those who made the album what it is today. Perhaps a bit of both.

There is an ancient Hebrew esoteric term called the “Binah”, which refers to everything in the universe having its own distinct purpose and place. Perhaps Bomer never truly got to see his ambitions played out to fruition within his own lifetime, but even today he still has influence in spades. Not only has his pioneering drum style seared itself into entire generations of punk percussionists, but he’s also left behind a presence and a charisma that are impossible to replicate and even more impossible to forget, which are all the things that legends are made of. So in that way, Bomer was within the Binah of it all, meaning he did have his purpose and place, even if it could have been for a bit longer. At the end of the day, there’s albums like Live In a Dive to bring him back around, and friends like Chris Rest to both tell his story, and play his music for years to come.