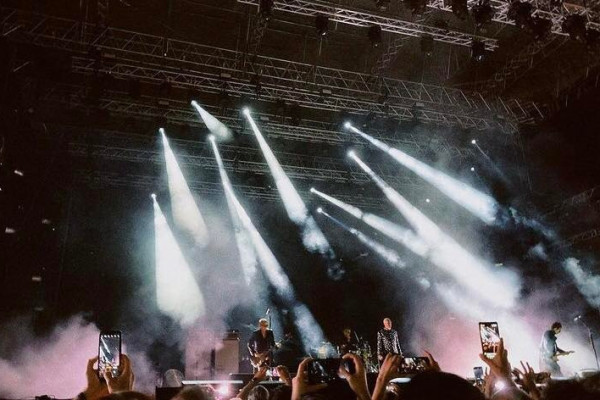 Last night, Bauhaus played the Release Festival in Athens, Greece. The band only made it through eight songs, before canning the show, and then coming back for two "encores." In all, the band got through ten songs, where they usually play about 16. However, throughout the set, the band was plagued by sound problems that the sound crew could not explain.

Front of house sound technician Chris Raughley issued a statement: “These problems we had during the show in my experience could not have been anticipated or expected. Every channel of wireless provided to us started giving us trouble in the beginning of our set. Wireless guitar was first to fail. Simple fix, we switched to a wire. Then the lead vocal. We switched to spare back up. Then the Sax wireless failed. Next Spare vocal failed. That was 4 wireless systems in the first 5 songs. I’ve never experienced failures like this in all my years. They were all on but not giving fullness and good signal. Most people probably couldn’t even tell we were having all these problems because I could cover most of it in the FOH mix. But, all 4 Wireless In Ear Monitors failed as well creating a problem for the band to hear themselves onstage. We checked these systems many times throughout the 2 days we were here. Something very strange happened with wireless here. I’d love to understand, but I think this has probably happened here in Athens before? Something of a local problem maybe due to interference? It could also have been a power problem to that rack but during a show I had no ability to check systems from my position at FOH. Maybe the other previous bands left all their transmitters on? This would create a problem but less likely the culprit. I will try to process this in the next few days and maybe I’ll have more answers as to why this could happen. But for now I can say with confidence it was catastrophic wireless failure and for whatever the reason it made for an impossible situation to correct and fix due to the complexities of the problems.”

We'll let you know if this unsolved mystery ever gets solved.

Tours: The Bombpops/The Last Gang (US)