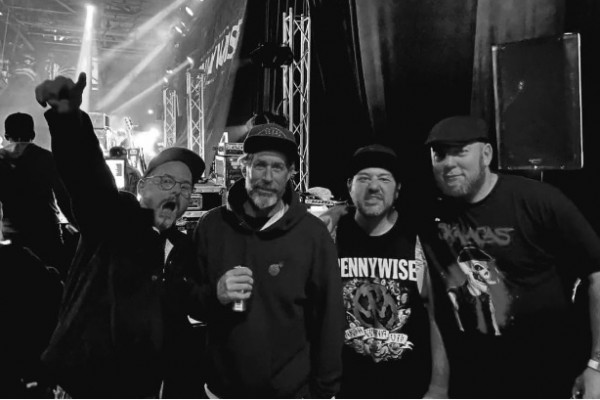 Raw 'n' ragged hardcore punkers DFL just re-released their third album, 1997's Grateful… on SBAM and Say-10 records! It's a triumphant moment for the group because, back in the day, they broke up just before album release!

But now, some 25 years later, A reformed DFL (with original members Tom Davis (vocals) and Monty Messex (guitar) as well as newi-sh members Jordan Jacques (drums) and Patrick Sullivan (bass)), are going on a Euro tour to salute the LP and play some classic hits… as well as some new stuff from the fantastic YRUDFL !.

So, Punknews' John Gentile spoke to the entire band about the reissue and upcoming tour. You can check it out below.

DFL released two records prior to Grateful… What was the goal with the band's third LP? Tom: Kind of pick up where we left off because today’s music sucks.

Monty: Grateful… was the first record that we produced and recorded entirely on our own. Our first two records, My Crazy Life, which came out on Grand Royal in 1993, and Proud To Be, which came out on Epitaph in 1995, were produced by Adam Horovitz and Mario C. Adam also played bass on My Crazy Life. It was also the first record that we didn’t record at G-Son. We recorded Grateful… live in Tony’s living room. So I guess the goal, if there was one, was DFL DIY.

I heard that there was a plan to record the album in Bali? Why was that a plan and what happened? Tom: Fucked up Tony [the drummer at the time] spent our advance on a video budget and strippers!

Monty: We were gonna use our advance to set up house there and build a studio, and just live in Bali until the money ran out. Tony and I were down, but the other guys weren’t into it. The first song on the record, “We Are The Dead,” actually includes some Balinese Gamelan music at the beginning of the track, kinda a nod.

Grateful… is really cool because it finds the band really stretching its limits, while remaining a straight up hardcore punk band. How did you juggle such extremes? Tom: A high THC level and a balanced diet.

Lyrically, which song had an important meaning to you? Tom: “Help Wanted”… if it’s on that record?

Monty: I guess lyrically it would have to be “Prove Me Wrong.” I felt strongly about the song’s message of unity, and it was the first DFL song that I sang lead vocals on.

Famously, Grateful… was released as a single track CD. It drove fans mad. What happened there? Tom: Fucked up Tony was always up to some kind of shenanigans.

Monty: Yeah fans hated that all the songs were released as one mega track. To be honest I wasn’t crazy about it either. During mastering Tony decided to put all the songs on one track. I wasn’t there cause my wife made me go to Disneyland so I couldn’t really do anything about it, but I had a feeling something crazy was gonna happen.

DFL broke up just before the release of Grateful… What caused the break up? Tom: Sex, drugs, and hardcore is where it’s at.

How did it feel to listen back to these tracks some 25 years on? Tom: Like beer bonging Jager Meister.

How will it feel to finally get to play the album tracks for people in a live setting? Tom: Hopefully like going to my first Punk Rock show for your first time, times 10 minus 1 2 x U.

Monty: We usually have at least a couple songs off Grateful…l on our set list, but now that it’s getting a reissue hopefully we can turn a buncha new people onto the record. Stoked for that.

Jordan and Patrick, were you DFL fans before joining the band? Jordan: Absolutely! I had My Crazy Life on cassette in high school, and I wore that thing out! Got the cd when I picked up Proud To Be a couple years later and of course when grateful came out my mind was blown to bits. I’ve always been a big fan so when Pat asked me if I wanted to play, it was a very surreal moment, I didn’t believe him at first!

Patrick: For sure! They always stuck out to me. They had an energy that really caught my ear. Actually playing these songs sometimes feels surreal, it’s rad. Plus Tom and Monty are way easy to get along with, so that was a relief.

What do you feel is the special element that you bring to DFL? Jordan: I think the love I have for DFL and the music that the band has created over the years is the best “element” I bring. I love this band and always have, so when I play these songs I want to keep and preserve the sound and style and heart of these songs. I want to play them just like I heard them growing up. So that’s what I do and I think Tom and Monty appreciate that.

Patrick: Ha ha! I honestly don’t know if I have one!… but my heart is definitely in it! I guess being committed and believing in this band and the songs, that’s my element.

Describe how the band functions in 2022. Jordan: How we function in 2022… We write music, we practice, we play shows, we eat pizza… pretty standard stuff!

Patrick: Well, I’d say, we function at the center, as friends. If you ask me, we all genuinely get excited for each show, and if anything, a show or interview etc, comes up, we talk about it til we’re all good with it. It’s really a no stress situation, I look forward to every time I see these guys.

Who is the best dancer in DFL? Jordan: Well… ME of course!

Patrick: I definitely would not win this one, maybe Tom? I’ve seen Jordan try…..and would love to see Monty dance……. I’ll stick with Tom.

Monty: I’m actually pretty smooth on the dance floor myself, but I’ll vote for Jordan. Love to see him try that shit.

You haven’t played a European tour before. What are you looking forward to? Jordan : Well having never been to Europe in my life, I’m pretty much looking forward to just being there with my friends, I’m excited to see what the punk scene is like on the other side of the world, I’ve heard it’s pretty rad!

Patrick: Everything! I am looking forward to us four answering the question YRUDFL! Plus playing with so many awesome bands and getting to meet the people. Hopefully find some new food I’ve never heard of.

Monty: I’m looking forward to playing SBAM Fest and Brakrock and of course all the club shows look rad. It’ll be fun to hook up with our friends in Get Dead, and to meet people in-person we’ve been Zooming with for like a year at SBAM and Flix Agency.

Tom: Large bowls of caviar and touring Buckingham Palace maybe shoot a little pool and bungee jumping off one of them fancy ass gold bridges…