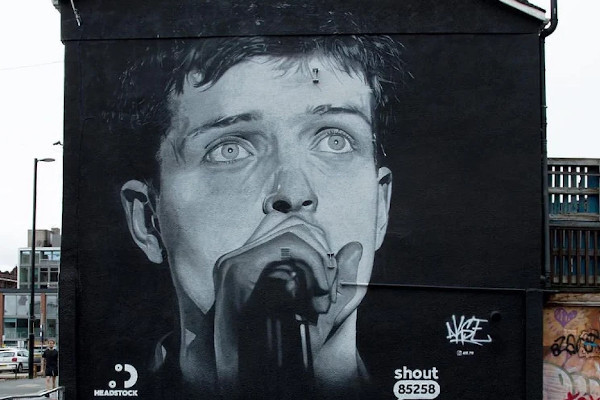 On August 16, a mural in Manchester of Ian Curtis of Joy Division was painted over to make way for an advertisment for the new album from rapper Aitch. Akse P19, the artist who created the mural took to Instagram to say,

So my mural of Ian Curtis based on the original photograph by @philippecarly has been painted over to promote the release of a new album, personally I don’t have anything against hand-painted advertising as this is how I make a living, but this mural… had become a cultural landmark and meant so much to people from Manchester and beyond; it doesn’t take much common sense to understand that this mural should have remained for what it represented and stood for.

Aitch took to social media to comment and apologize for this act saying,

It’s come to light that the iconic Ian Curtis mural on Port Street has been painted over with my album artwork. This is the first time I’ve heard of this, me and my team are getting this fixed pronto. No way on earth would I want to disrespect a local hero like Ian.

Peter Hook took to Twitter to comment on Aitch's statement writing, "Thank you @OfficialAitch great gesture [thumbs up emoji]". The mural is currently "getting fixed as we speak" according to a tweet from Aitch.

I don't just choose locations for billboards, this is the first time I’ve seen it myself. Getting fixed as we speak https://t.co/590M7Y4RNl

Exclusive Videos: Watch the new video by Zachary Ross and The Divine!