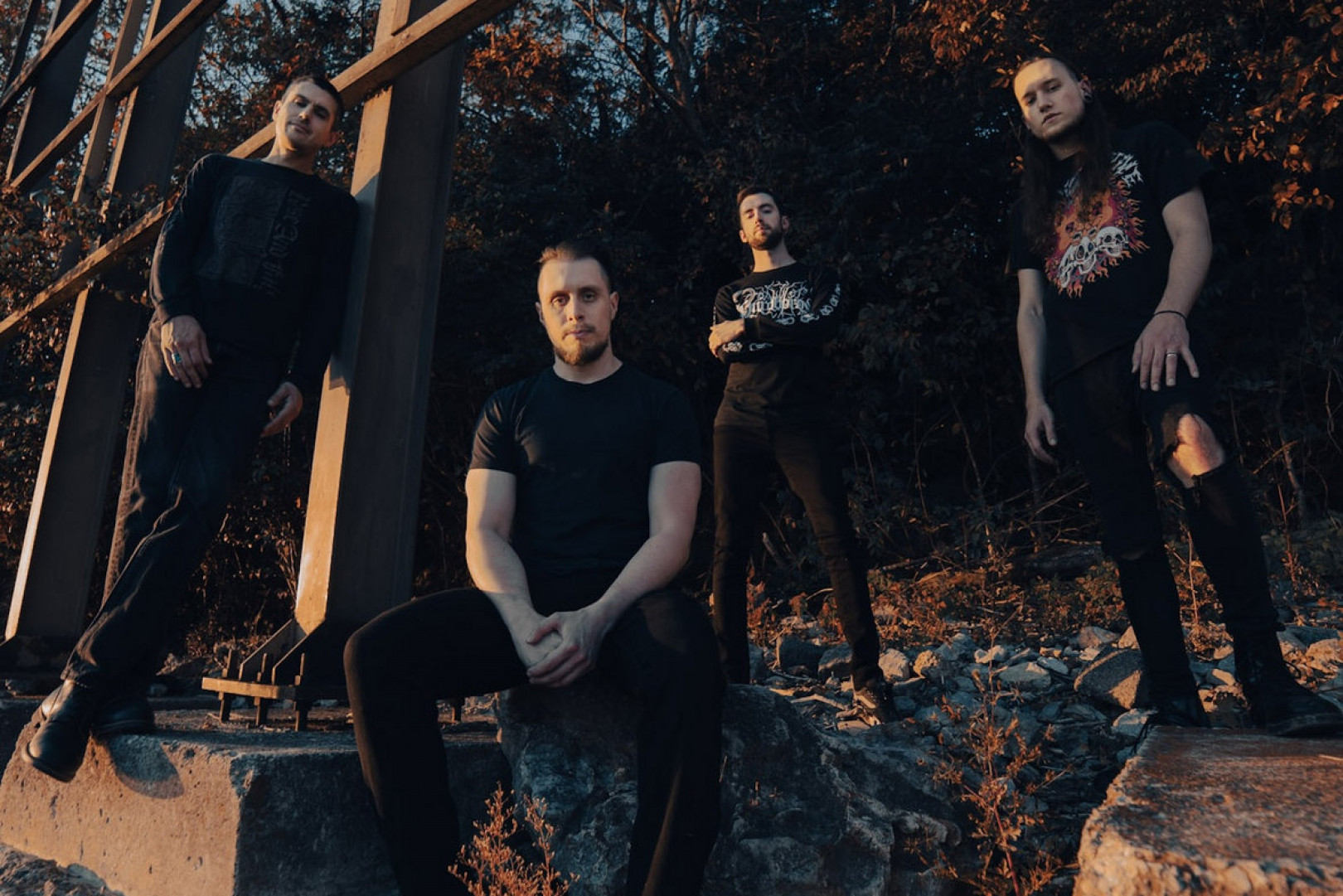 With new record Empyrean being released this Friday, Falluja are in new era, with a few members having left the band and the band working with a new producer. So, Punknews' Sam Houlden reached out to band mastermind and founding member, Scott Carstairs to get a little insight into the record and the process of its creation.

Thanks for taking the time to answer a few questions, Scott. The new record, Empyrean is out in early September. It’s your first record in three and a half years, your longest spell between studio albums to date. Is that down to the time you’ve spent honing the songs, because you were keen to wait until live shows were a more consistent thing again, or was there another reason? Scott: For about the last 10 years, all the time I had that wasn't spent on touring or logistics for the project had been spent on writing music. The last few years was no different but this time the world was forced to stay home. There was an extraordinary amount of hours put into writing Empyrean. Much more than "the flesh Prevails" which was by far the most challenging album to record for me. And with no tours looming, it was very easy to not rush anything and make sure every little detail was molded to perfection. From my perspective we finished this record quite quickly for how complex and dense it was. But unfortunately, it has taken nearly a year after me turning in the record to get it to the public. I love who I work with but the turnaround time for labels and distribution has a lot to do with why it takes so long for records to come out. It's unfortunate.

What to you are the defining features of Empyrean? There definitely seems to be a sense of redemption, or maybe a weight being lifted in some of the tracks. Is that something you were aiming for? Scott: That’s interesting that you got the sense there has been a "weight lifted", because I feel these riffs and songs are heavier than anything we have put out before lol. They are relentless and pissed off. I think some of the defining features of this record have to do with the musicianship of this line up. Every song showcases the insane abilities of each member but only to serve the music. From the solos to the bass work, the ethereal female vocals, improvised drum grooves and fills, the absolutely savage guitar work. The music feels alive because a lot of it was done in the moment, not in a program or rehearsed for weeks. A lot of bands want to sound better than they are, and you almost have to artificially create that in a program like guitar pro, and just hope you can get to that level eventually. This record was mostly done by feel and what sounds natural. I feel the characteristics of each member's musical voice when this record plays.

A couple of months back, you announced that Rob, Antonio and Nico had all left the band. Obviously yourselfand Andrew have been working together since the very early days of Fallujah - do you feel that Andrew and yourself are the ‘core’ members at this point? And what brought about such a significant line-up change? Scott: You cannot expect everyone to want to put in the immense amount of effort and patience it takes to make records like this. And I certainly can't blame Rob who has been there for us for more than 10 years, assisting with so much, to want to try new things in life during a time of such uncertainty. As for the others, the commitment was too great. Andrew and I have this music in our blood. I know personally, it will always be a part of who I am and what I do, in this project or another.

And how have things been with Kyle and Evan so far? Scott: They are everything Fallujah needed and wanted at this point in our career. They brought this record to heights I could not have imagined. Kyle's range and talents span multiple instruments and styles, only matched by what seems to be limitless creativity. Evan might be the greatest metal bass player alive right now, and the ideas he brought in while writing and recording were so unique and creative, it was surreal. They are both aliens in their own right. It is an absolute pleasure watching them create and contribute.

You’ve played with some of metal’s elite over the years, from Morbid Angel, Dying Fetus, Thy Art Is Murder and of course, The Black Dahlia Murder. I don’t know how well you knew Trevor personally, but I’m guessing the news of his passing was especially tough for those of you who had worked or toured with him? Scott: Trevor and The Black Dahlia Murder were and are some of the biggest supporters Fallujah has ever had. They introduced us to our current management, took us on some of the biggest tours we had ever been on at the time and truly taught us what it takes to be in a band. They are like metal older brothers, or maybe even metal dads haha! We wanted their approval and they pushed us to be better. Trevor was always a message away and every conversation radiated with enthusiasm and love for the music. He championed us like he did with so many other incredible bands coming up. He was one of the first people I thought to send the record to when we finished it and I'm so honored he heard it before he passed. There are not many greater feelings than successfully showing Trevor music he has never heard haha! He was excited to see people's reactions. When we heard the news on this last tour, we were all pretty devastated. I don't think there was a single person there that day that hadn't been on tour with BDM or at the very least impacted by Trevors kindness and immense talent. He was truly one of the greatest driving forces of this genre. He inspired an entire generation of metalheads and didn't even stop there. He made it his mission to uplift everyone and provide so many with opportunities to shine. Still can't believe it to be honest.

On Empyrean, you brought in Mark Lewis (Cannibal Corpse, Whitechapel) on production duties. You’ve worked with Mark before on Undying Light, but Mark has come into his own somewhat as a producer in recent years. His work on the last Whitechapel album for me has really planted a flag down as what he’s capable of. How was the recording process? And did Mark capture the sound you wanted? Scott: I think we all went at this record with a lot of aggression and Mark was no different. We were very proud of what we did with Undying Light. At the time it was some of the best tone crafting I had ever heard from him. It was huge sounding and it felt like we really nailed a lot of goals we set out to achieve. Little did we know how controversial a record this would be for our fans, haha! When we agreed to work with Mark for Empyrean, there was kind of this unspoken energy left over from the previous release. I think we all knew we had to put together something massive, and it had to be undeniably our best work. Or as Mark would put it "I want them to rip their dicks off" LOL. So, the session was incredibly intense to say the least. Many flights were rescheduled because Mark refused to get anything but the absolute best from us. It was the hardest I've ever seen him work, and it made for some brutally long days. About 5-6 weeks of brutally long days. Every detail and option wasexplored and every decision was toiled over and argued. The guy is an audio genius and true lover of all things metal. We couldn't have done this without him.

Fallujah seem like a band who fly in the face of the most typical criticism levelled at tech death bands, that the technicality can sometimes get in the way of proper songs. I guess what I’m saying is that you manage to cram a lot of melody, atmosphere and hooks into your songs without sacrificing technicality. Is that a conscious choice, or just an innate part of the songwriting process? Scott: I think it’s something that took me nearly 15 years to figure out and even today I feel like I can improve immensely. To answer your question, I believe it is innate at this point. As long as the feeling and message is clear and slips into your mind with ease.

I mentioned earlier about live shows and touring now being a far more regular thing, although especially when it comes to international shows, we’re still seeing a lot of interruption and complications. Are you hoping to tour the record outside of the US? And while we’re at it, who are some of the up and coming bands you’d like to tour with? There have been a few really exciting bands to either appear in the tech scene in the last few years or take a big step up… Scott: We would like to take Empyrean and perform it all over the world. Hopefully places we have never been before. We can only hope the rest of the world gets back to living life. We will be there when they allow us. As far as some bands I'd like to travel with…Inferi, Entheos, Neo Obliviscaris, Arkaik, Interloper. Really appreciate you taking the time to chat, Scott. Anything you want to leave the readers with? I hope you Enjoy Empyrean. We aimed to give you a record that defines the band and its message. If you would like to support us check out our Patreon. See you soon!

The Chats and Mean Jeans to release split 7-inch