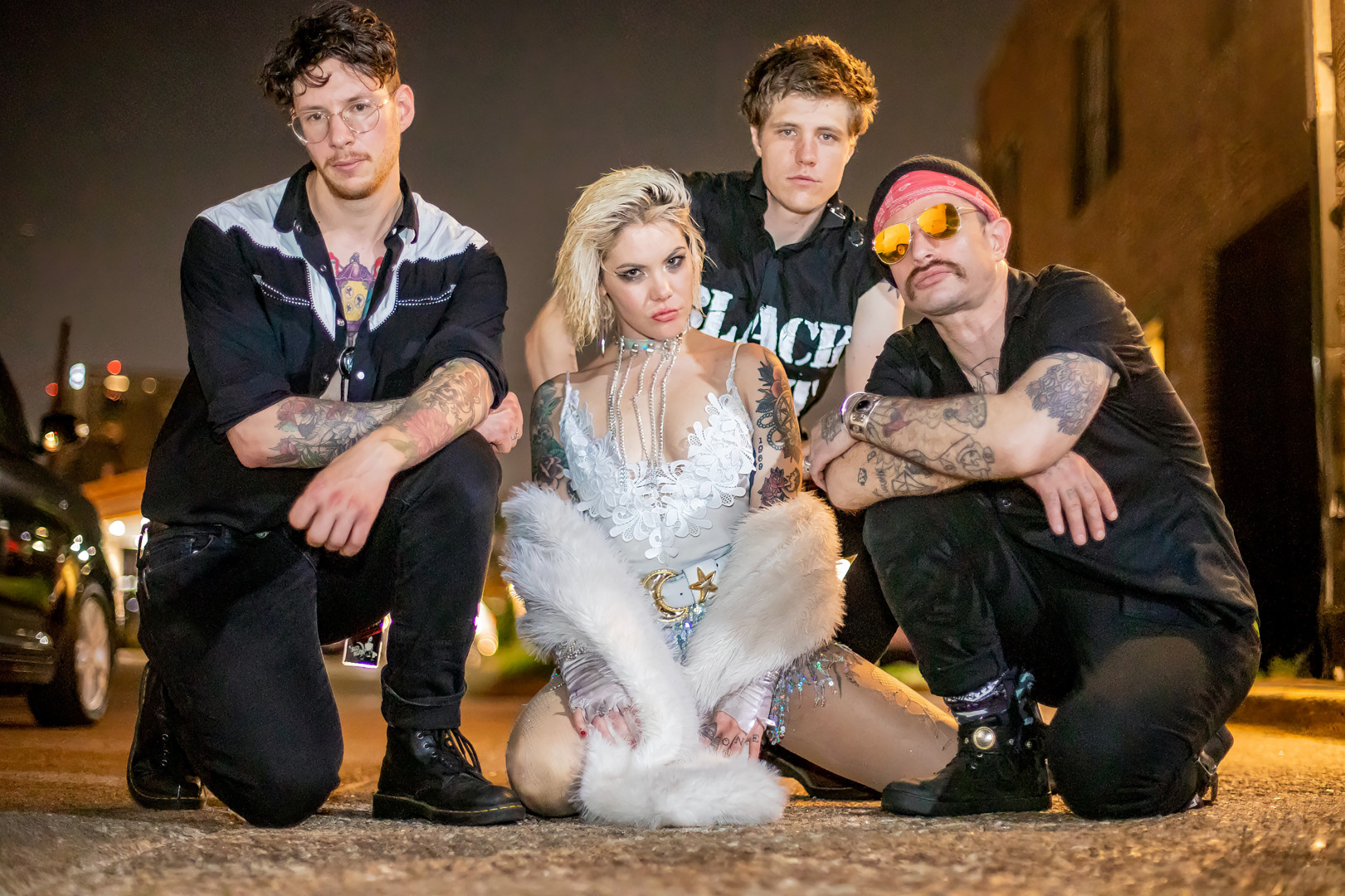 Tomorrow is Suzi Moon's big day! After the petering out of Turbulent Hearts and the nasty collapse of La Machina, finally, finally, FINALLY, Suzi is releasing her debut album. It's called Dumb & in Luv and it details just who Suzi is as reflected through her moving away from California. It's out via Pirates Press Records and you can pick it up right here.

The album is a ROCKER and we are mega psyched to debut it along with an interview with Suzi about the LP! You can hear the whole album below and see Suzi's thoughts on it below, right now!

So, not that long ago, Suzi Moon started a new band called LA Machina and everything looked really cool. They had a sort of futuristic vibe, there were three women in the band who each had a unique style, they rocked, they had a 7-inch out on Jello’s Alternative Tentacles Records, AND they even had their own trading card series! Pretty cool! Things were looking bright! And then… things went dark. Really dark.

The band totally exploded in the worst way- this person hates this person, this person always feels like she is waiting for that person, and it was gnarly and there was a lot bad blood and Suzi Moon, who saw La Machina as her heart and soul following the petering out of her old band, saw her dream snuffed out.

“I was crushed when L.A. Machina fell apart,” Suzi says. “Machina was a palate cleanser after my older band, the Turbulent Hearts. I needed that personally. I needed to work with a new group and not be the leader, just to be around fresh energy and do something new, like playing bass… but the Universe had different plans, and I don’t fight the Universe. It just wasn’t meant to be.”

So, Suzi moped around for a little bit and was kind of miserable and kind of just hung around L.A. at this bar or that bar or this record store or that diner. She says, “I had already written ‘I’m Not A Man’, ‘Nuthin’ To Me’ and ‘Special Place In Hell’ before starting L.A. Machina and was going to contribute those songs to the Machina full length. Playing with L.A. Machina for one year helped me to grow past Turbulent Hearts and evolve. It got me back into the studio and inspired again. By that point I couldn’t go back to Turbulent Hearts, the only way was forward.”

Meanwhile, around town, Drew Champion (nice guy, dresses like he’s in the Clash, always cuts the sleeves off his t-shirts even though he doesn’t lift) had moved allll the way from DC to LA and things just weren’t really setting the world on fire. He had fronted DC punkers the Split Seconds and was now playing in Glitter Trash, but that “La Dream” you used to read about was apparently a “used to be” kind of thing.

Well, what do you know? Suzi and Drew linked up and Suzi decided to do her own solo project… “Suzi Moon” or “the Suzi Moon band.” (Depends who you ask). They cut two really kicking eps, Call the Shots and Animal, both of which had a Raw Power style charge with a little glam and Cheap Trick vibe painted over the top. Meanwhile, they toured like crazy, playing some wild shows. At one show, Suzi smashed a bottle on her guitar and knelt in the glass. And another, her boot broke after some dude grabbed it and smacked him over the head with it!

If you’ve seen the band live, you know what I mean. Suzi shreds on the guitar, sweating all over her far-out fashion choices (sometimes she wears a silver space suit, sometimes a Marilyn Monroe boa and white dress) all while singing about how nice the summer is or how she is miserable or how the literal physical displacement of the earth and moon can actually affect your biological self… and if you think that’s pushing it, you’re wrong. I reviewed one of the early EPs, got the meaning of “Animal” wrong, and Suzi saw me at the show, cornered me, and explained in full detail, with great "intensity" about how wrong I was and how stupid my analysis was. (Full disclosure- I did get it really wrong). Suzi seems to be in a state of constant flux and is seven people at once. Her hair color is never the same twice. On stage she jumps around and yells orders out to the crowd. But then, if you talk to her, she might mention that she used to beembarrassed by her slight lisp (which is dumb because it gives her character, just like Cher’s sloooowww way of speaking or Stevie Nicks’ Cali-draw where raises her pitch ~~~slightly at the end of her sentences~~~). Sometimes she seems like she’s barely over five feet tall and sometimes you’d swear she’s over six foot. She can roll around in glass like Iggy (not advisable) and also tear up when thinking about some abandoned song from years ago that no one really cares about anyways.

All of that, the destruction of LA Machina, the road sprinting tours, the artistry link up, the hurt, the fun, and all of that jazz went together to form Suzi Moon’s first full-length. And let me tell you, Dumb & in Luv is a cracking “debut,” even though it’s the culmination of all the bands Suzi has been in before.

In a a way, it’s a dissection of what make Suzi be Suzi. “California” plays a huge part on the LP even though Suzi has relocated to the East Coast. “I was born in Oakland in 1989 and we moved to Long Beach when I was two years old. I’m a California girl through and through. Up until I moved to DC in 2020 I had never lived outside of the LA City limits my whole life. There’s an energy and magic to California that is undeniable. It’s a trippy fucking place to grow up. There are upsides and downsides.”

Along those lines, Suzi also focuses on her family. She literally grew up in the music scene playing in Civet with her older sister while she was in her early teens. Meanwhile, she had a single mom who worked all the time to provide for the family. Suzi says, “The track ‘Family Memories’ is a bittersweet tune because I was inspired to write it after my Grandma passed away in 2019. I come from a really small family. It was just the 5 of us- Grandma, Mom, Liza, Joe and I. No cousins, no aunties or uncles, nothin’ like that. No other grandparents. We are a really tight unit because there was no one else we could rely on for so many years. The song sorta just poured out of me one night and I’m so glad it did because it’s one of my favorites to play.”

What’s probably most interesting for me is that on the record, Suzi embraces and pushes away from cliché. “I go blind for you” is a straight up love song where if you deleted the buzzing guitar could be a Martha and the Vandellas record or, if you put a synth behind it, it could be on a Cyndi Lauper record. But then, on the other hand, “Money,” which is one of my favorites kicks against capitalism and asks the question: “why slave for a job that wouldn’t lift a finger for you?”

“I worry about money a lot, which is lame because I don’t feel like I personally want or need lots of money, but the band isn’t just about me,” Suzi explains. “It’s a necessary evil to keep the train rollin’. Every band that isn’t playing to sold out arenas is experiencing this. It’s not just us. It’s becoming harder and harder for a small band to ‘make it.’ And by ‘make it’ I don’t mean ‘MTV, sports cars, cocaine’ - I mean ‘make enough money from the band to be able to do what you love full time.’ I’m not complaining, I’m very blessed to get to do this and thankful for the support of our fans, but this keeps me up at night. That’s the life of the artist, though… and I’ve been at it for 18 years now, so I’m used to being broke.”

She continues, “But, I feel fuckin’ great, like I’m hitting my prime or some shit like that,” Suzi says. “Now that I’ve got three releases under my belt and a killer band, I feel like… Hungry. We are just getting started. I’ve experienced a lot in the last two years, so it’s time to turn that stuff into new music. I’m 33 now. I always felt that this would be a special year in my life. I feel both young and old all at the same time. It’s an interesting time. I’ve got a helluva past behind me but way more excitement to look forward to.”