Listen to the new EP by Cluttered and read a track-by-track breakdown! 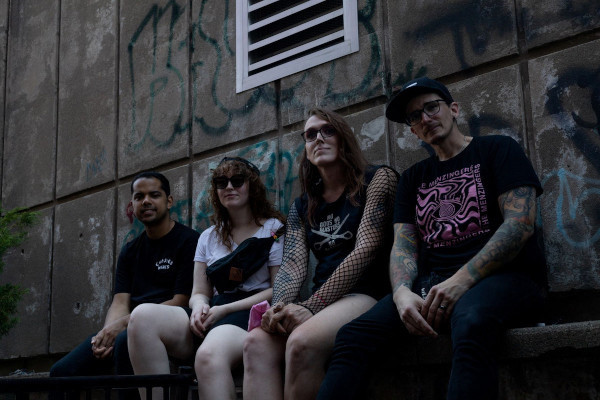 by Em Moore Streams 17 weeks ago

Today we are super stoked to bring you the premiere of the new EP from Halifax punk band Cluttered! The EP is called Transgender Dystopia Blues and features four killer tracks that you won't be able to stop listening to."Take Me Away" is an extremely catchy new song about heartbreak, "Anchorless" is a wonderfully punked up Weakerthans cover, and "Dysphoria City Limits" and "This Rusted Bike Lock" are reworked versions of two of singer and guitarist Matty Grace's solo songs - originally appearing on her Dysphoria City Limits and Rumination Year EPs respectively. Speaking to Punknews about the EP, Matty said,

"Transgender Dystopia Blues is our new EP and it’s kind of an oddball. The title is kind of an obvious homage to Laura Jane Grace and Against Me!, but it’s pretty dark and I like wordplay. I started performing solo in 2017 and released a slew of EPs and singles from 2020 onwards. A lot of the content of those recordings is deeply steeped in ~feelings~. In 2021 I released a solo EP called Dysphoria City Limits and when Cluttered was discussing new material Dylan [Mombourquette] would regularly be like, “we should do something with Dysphoria City Limits” the EP’s namesake track.

Cluttered has been working on a full length for a while now and we decided to do something as a holdover until that is done. It started with revisiting a couple of the solo songs as a band. That felt a little bit empty - like why not something different or new? So I wrote a new song and we finished a Weakerthans cover we had been toying with. All that being said this is an EP that is also steeped in big feelings; heartache, gender dysphoria, isolation. They’re all there. Just like they might always be.

Transgender Dystopia Blues will be out digitally on October 6. Matty also went through each song and you can read her track-by-track breakdown and listen to the EP below!

I really like this song. It’s about loss and heartbreak and just wanting that feeling to lessen. Even if it’s only for a few minutes at a time.

I’m a transgender woman. I also happened to spend the majority of my adult life in Kjipuktuk (so called Halifax, NS) which has a large queer community but in my experience was incredibly isolating at times. There aren’t a ton of out trans punks in their 30s. I also live with Depression and the intersection of isolation, Depression, and Gender Dysphoria is this song. It’s me trying to semi eloquently put into words my feelings about my body and the feelings of lost time. Trying to put a positive spin on a challenging situation is exhausting but somehow I’m still always fighting for an upside.

I love The Weakerthans. They have incredible lyrics, perfect arrangements, and evoke so many emotions. I even like the song about curling? And I'm not a sports gay. The principle songwriter of the Weakerthans, John K. Samson also played bass on the first two Propagandhi albums. Cluttered had the opportunity to open for Propagandhi in May of this year and we toyed with the idea of doing a cover of a song that had zero possibility of being played. We opted to be more tasteful but the idea of recording the cover was planted in our brains. So we did it. Our pal Sean MacGillivray (Alright Already, The Burdocks) sings harmonies alongside Becca and myself. Sometimes recording covers can be a challenge. You want to maintain the original spirit but not make it just a carbon copy. Hopefully we did that.

This is the oldest song on the EP, I wrote the riff during a Future Girls soundcheck in 2017. It was written during a really tumultuous time in my life. I was dealing with a major breakup and coming out as trans in the span of 6 months. This song is about the feelings of that experience. Feeling like a people pleasing doormat and making yourself small only to then beat yourself up for the same behaviour. The ending is a romanticized idea that even in the bleakest moments you can still try and fight on. Even if the battle is never ending.