We recently got a chance to grill Roger, drummer of No Motiv, about everything from their feelings on the label they're on to what kind of sunglasses he likes. 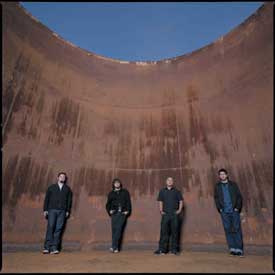 State your name and what you do.

I'm Roger and I play drums in the band.

Are you happy with all the promotion Vagrant is giving you guys, like the splash page and X-Games promo with the new album?

We are extremely happy with everything that is happening to promote this record. Vagrant is working very hard for us as well as our management. We couldn't ask for more.

Would you ever consider testing the market as a free agent?

You mean you want us to breakup? Nah, we just want to irritate the haters with our noise.

For an album with so many positive themes surrounding it as opposed to past releases, what was your intention with some of the darker overtones, like "Death in #'s" and "Audition"? Or what were they a result of?

They were the result of the three of us(Jeremy, Max and I) jamming at our practice space. Audition kind of wrote itself in 5 minutes. Jeremy's lyrics are about some heavy subject matter. Most of the songs on the record touch on some negative things but in the end of the record we leave on a positive note. Itâs a darker and deeper album than our previous two. With the new band lineup, our sound just naturally changed.

What attributed to the songwriting in terms of it being less personal and more generalized?

Many of the songs are actually more personal than you'd think. I think Jeremy tends to write about meaningful subject matter to him in his life.

How was the experience self-producing Daylight Breaking?

It was stressful at times. There were things that we learned in the process that would have helped us out in the beginning. It was a learning experience, and we learned the hard way, but we worked really hard and it was great just having the three of us in the studio and then bringing Jeff into the band and recording more songs. In the end we are really proud of the record. Producing ourselves just feels correct to us right now.

Would you compare the new album to any past releases?

Itâs our best record. Itâs a progression from album to album. I think we have finally started to find ourselves with this record and now we can grow from that.

You're planning on shooting a video for "Into the Darkness," if not already, is this right?

It has been filmed already. Unfortunately, we had to leave the Vagrant Tour early to complete the video, but itâs looking really great. Its based on a nightmare Jeremy had and the lyrics for Darkness.

Do you have any headlining plans in the works? If you ever did, who would you want to bring, past or present?

Right now we just want to go on tour. Its looks as is we might be playing on bigger tours for a while and get into things. Hopefully headlining isn't too far away. There are so many bands out there that are doing well right now. Its hard to say who would play under us right now. I'd like to take out Fairweather, but that isn't looking too good.

UK wants to know, are there any plans to go overseas there?

We would LOVE to. As soon as we can get out there, we will.

What have you been listening to lately / what albums are in your current rotation?

Do you feel like your fan base is comparatively small when looking at the other Vagrant bands? How do you feel about it either way?

Haha I know our fan base is smaller than the rest of the roster. Itâs our fault for taking a 2-year break from the road. Its unfortunate, but we're ready to start fresh and we hope people still remember us and dig our new record. 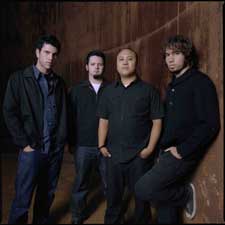 How was the transition for Roger going behind the drums?

It wasn't meant to be permanent at first, but things just gelled the right way. We were really happy in writing this record together with me on the drums. It's getting better for me as a drummer. At first it was kind of ugly, but there is light at the end of the tunnel. We are happy with this lineup we have.

How was the Vagrant tour? the bands? Any wacky stories?

The bands were really fucking nice. Everyone worked hard and put their all into each set. It was a bit rough here and there following a bus tour in a van, but its all good. We had a great time hanging out. It sucks cuz things got real nice towards the end, but we had to go home early. We're not much of a wacky band so there ain't much to talk about.

Who came up with the idea for the "Composition Book" lyrics layout for Diagram for Healing?

That was our partner in crime, Gabe Cano. He and Jeremy came up with the ideas for that layout. Not many people realize that there are actually lyrics under the tray. Now ya know….

Have you heard Pat's new band, From Satellite? If so what do you think of them?

Hahaha, I remember the original question! This isn't the same! Ok anyways…. I hear Pat's new band all the time, since they practice under us at our practice space. Those guys are some of the best musicians I have ever heard. They're also great songwriters. Armand is one of. if not the best guitarist I know. He's really happy in that band too, which is great.

This or that closing rundown:
Soda or Pop? Coca
Catsup or Ketchup? Ketchup
Badgers or Wombats? Como?
Sprinkles or Jimmies? whahappuned?
Oakley's or Blue Blockers? Ambervue!

Thanks for the interview, I go to punknews.org all the muthafuckin time. How come the "how come you guys suck?" questions are gone? Those were the best!

New Cougars EP in the works