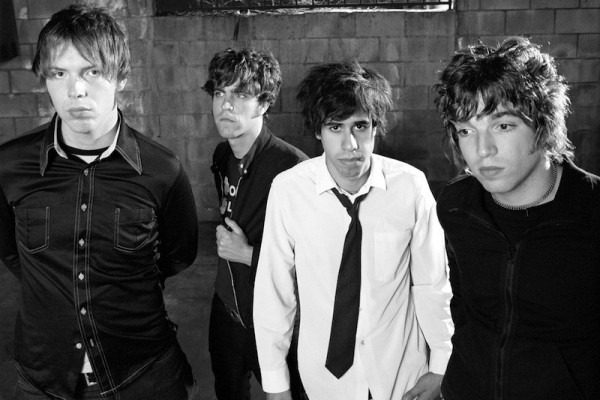 Angie Lalonde is from Canada. So is Hot Hot Heat. Makes sense, right?

ANGIE: Your new record opens with âNaked in the Cityâ, I thought that was a rad track to open on. Did you guys decide the sequence of the songs?

DUSTIN: Weâ¦ well I guess technically, we had the bottom line there and say but our guy Tony at Sub Pop suggested that. We really couldnât figure out what to do, we had all these ideas and then weâd just go back on them âokay this is going to work, no this is not going to workâ so he just suggested it and it actually is probably the best song to open the record with, I do agree.

Did things only really start getting serious and stable for you guys as a band when Dante joined two years ago?

D: Oh yeah, well two and a half years ago, I think somewhere in March early summer or late spring.

Where did you find him?

D: Are you familiar with Victoria at all?

Iâve never been there.

D: Well itâs on an island, a little community about 45 minutes North from Victoriaâ¦ The little place where he lived in, its kind of half way between. And we played this town called Duncan and Victoria and I guess he came down to shows at both places and weâd seen him play in a couple of bands and stuff, we met him at partiesâ¦ And one night we played a show in Vancouver and it was actually the last show that we played with our singer that was the last show ever. Well Dante was at the show and went to the party afterwards and him and Paul just started playing guitar together and Paulâs like âI found the guy!â and I mean that was it easy, quick and painless!

But you guys have always had the name Hot Hot Heat right?

When it comes to tours do you guys make it a point on deciding which band youâre going to bring as support and what not? Like âThe Unicornsâ tonight I heard mentioned you guys wanted avidly to bring them alongside.

D: Oh yeah definitely, weâve been doing that for a while now. And I mean itâs not like weâve been headlining since square one either so weâd go out with bands that we thought weâre cool to open for, good support slots or whatever but unfortunately weâve done the mistake of going on tour by ourselves as the headlining band and being at the mercy of clubs to find bands to play with us. And I mean we got bands like anywhere from Incubus to just garbage, like pop punk and stuff like that so we decided I guess it was maybe like May that we were going to start bringing bands along with us so at least we were guaranteed to have a solid line-up time to time as opposed to like Good Charlotte clowns and stuff like that.

What do you think is the best about going on international tours, the culture shock, the cuisine or the shopping?

D: Definitely not the cuisine, the cuisine is terrible! Especially in Europe, yeah more so in Europe itâs actually awful, god-awful! Um the UK is kind of gross for the cuisine but weâve been there so often now that I kind of got used to it, I kind of know now what to eat and what not to eat! In Europe I swear to god they put tomatoes on everything! They put mayonnaise on everything. It even just seems like the food standards and their cleanliness is just a little low Parr, so itâs a gamble. Iâd say especially in Germany, Copenhagen and Scandinavia where you just donât understand the language so if you get a menu you donât know what youâre ordering, itâs just a crapshoot! I sometimes choose not too eat (laughs) but the culture shock though itâs pretty cool. I mean I do dislike one country in particular and some countries I really like. Britain actually I thought was pretty cool to go there and the shopping too, I bought this jacket there. Oh yes itâs very British itâs very current. (laughs)

Do you think more pressure is put on bands appearances these days where as there wasnât emphasis of this kind or that type even 20 years ago?

D: Yes and no, I mean yes there is a certain element within a certain group of bands that thereâs definitely that sort of fashion sense but when you look at bands like Nickelback or Staind, where if you look at them they wear what normal people wear, typical clothes and then of course you know the bands like The Strokes that are into fashion and definitely have a fashion sense right, I think it really just depends on what the band is thoughâ¦

Where was your first practicing space?

D: First one ever, when I first started playing guitar or with the band?

D: Wow, weâve had like probably half a dozen but the first time we ever got together, the original line-up was in Steveâs parentsâ basement which oddly enough is where we practice now.

D: Yeah definitely! Luckily itâs below ground so you canât hear anything outside so itâs perfect.

So we all know âBandagesâ got banned on certain radio air-waves in certain areas when Iraq was invaded, honestly it must have been to you advantage for whatever reasons they had, you guys got lots of free press out of it, New York Times etcâ¦

D: Like look it soon funny, I just got asked about this today, I mean itâs so funny that happened in something like March or April, something like that, yeah it comes up, I think in about every other interview I get asked about it so yeah I mean definitely it worked to our advantage but it wasnât all that insane or scandalousâ¦

Totally, thereâs really nothing to use against you in the song.

D: Yeah and the thing thatâs kind of funny about that is they banned our song but âSeven Nation Armyâ by the White Stripes came out that same week but they didnât ban that? Weirdâ¦

This is a personal question for me, I was so stoked in your âBandagesâ video you have women wearing halos, how come, whose idea?

Oh yes! I took personal note, I wore one.

D: Oh yeah! Yeah! That was the directors, in hindsight though thatâs pretty cool!

So you guys got to not only play Letterman but Conan, Iâd tell my kids. (laughs)

D: It was pretty cool, knowing that even people wanted us to play on those shows, itâs flattering. It was pretty uneventful though we pretty much went in played then leftâ¦

So you never got to meet them?

D: We met Conan but I didnât actually talk to him a lot, Letterman though I didnât see him, I think I actually only got to shake his hand but Conan, it was pretty sweet. I think he really wanted to be a musician cause they have rehearsals during the day, trying to figure out what theyâre going to do and get the script down right and he just sat at his desk and was just strumming guitar in between lines and stuff like that. Walking around the back room and singing and stuffâ¦

You guys were all in bands before Hot Hot Heat, have any of you thought of side projects?

D: Um, itâs hard to say it really depends, right now we obviously have no time at all to do anything besides this but I plan on releasing a record sometime of stuff that Iâm going to do myself but itâs going to be more leftfield kind of hip hop kind of stuff

A different refuge from thisâ¦

D: Definitely I mean thatâs something I can do by myself quite easily cause I have a massive bunch of electronic equipment so itâs just I got to get the ball rolling with that, thatâs what I plan on doing but as far as starting other bands, itâs virtually impossible cause weâre never home, right.

How long would you say youâve been on tour for the last year?

D: Well weâve been on tour for something like eighteen months or something like that but itâs not consistently though, weâll go out and come back for eight days then go out again for another month and a half then back or whateverâ¦ I think the longest stretch weâve had off wasâ¦ I think November sometime, late November and we didnât actually leave again until about a month and a half we had off. But in that month and a half off we still flew out to L.A for two weeks, we played a bunch of shows it ended up only being about three weeks, wow yeah holy shit thatâs a long time (laughs). But weâre even to the point now where we refuse to go out for more than a month and a half. We did three months straight once and that involved touring the States twice and going to Britain and Europe twice, so yeah it was pretty ruthless and brutal.

D: Yeah when we get back we are, we finish this tour soon then weâre going to go home and take some time off, a few weeks or something like that and then weâll start writing I think weâre aiming on hopefully having the record recorded for like April, so usually itâs about 6 months after the record is finished before itâs released so probably like September or October, itâs about actually two years since the last record.

D: Hot as in hot? Or physically hot?

D: Oh we did a couple that weâre pretty much on par, we played the Casa something in Montreal, I forget but itâs like a cafÃ© slash venue and it was in the dead of summer it was so hot and there was likeâ¦ It felt like a hundred million people crammed in there. I was literally drenched head to toe when we were done playing. We also played this place called Modified out in Arizona this summer and it was like forty degrees out and there was no air-conditioning, just fucked up it was crazy. It was insane the bottles of water we drank on stage.

Where if ever has HHHâs most heated argument happen? Most of guys have all been friends for really long lengths of time to begin with it must feel like family now.

D: Wow yeah, well Iâve known Steve for eight nine years now, I guess Paul five or six now. Um you know actually we donât really fight all that often believe it or not, of course thereâs definite squabbles but I mean I guess itâs gotten to the point where thereâs really no point in arguing a lot .

(Just then Dante walks in the room)

Perfect, last question, where did Dante get his dance moves?

DANTE: From Elaine on Seinfield!!! (laughs)

The world's forgotten boy on DVD

Tours: Suicide Machines / Against All Authority / The Code dates