InaGreendase recently had the pleasure of sitting down with Serge, bassist of The Early November.

SERGE: I'm SERGE, I play bass. [points] This is FRAN, he's our guitar tech. This is Matt, he's our TOUR MANAGER.]

BRIAN (punknews): So how's the tour going so far?

M: How was losin' Hey Mercedes?

S: They were really cool to hang out with actually. I thought it would be kind of weird 'cause they've been around for so long--

M: Yeah, I was wondering, how does it feel to have a band [open] that's like…?

M: "Why is Hey Mercedes opening?" S: Yeah. And like we knew…it's just politics, shit like that. They wanted to do to the tour, you know, so we were psyched they even wanted to. We're all huge fans of them, and all those guys are cool as shit. 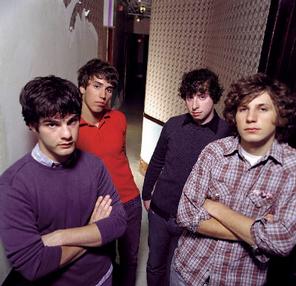 B: What's your favorite band to tour with?

B: How'd you guys get on the Less than Jake tour?

S: Um, Less than Jake just submitted…they asked us if we wanted to. Way it works, you know…

B: What have you been listening to lately?

B: The song that Kenny sang on from the Starting Line, how did that come about?

S: Umm, Kenny and Ace have known each other for like ever…[through] older bands…we've been playing together for like years, so…we're like, "Oh, it would be cool if Kenny comes sing on the album…"

M: How do you feel about Drive-Thru Records?

S: Um, it's a cool label. I mean, they get a lot of flak, you know, shit… But take it for what it's worth I guess…people like to bitch and complain.

B: Whose idea was it to start the album off with the acoustic song?

S: Um, I don't know, I think it was just basically a band [decision]. Like we're not…this fuckin', you know, like heavy band…and we're all not like a total mellow band. [We have both fast and slow songs]…we sorta had a whole format we wanted the whole album to go, with all like you know…

S: Flow..the songs in order and all that..so that's basically what it's about…

B: Who are your big influences?

[FRAN seems to laugh and thus cough to cover it up]

B: I know, it's the obvious question…

[indecipherable mumbling between FRAN and SERGE, something about "so many tours" and FRAN being sick]

M: You guys were signed when you were real young compared to other…?

S: I dont know, I was always like…now that i'm pretty outgoing…I don't know. I just take it to my advantage, like whatever; just I love playing the music, and the craziness that comes along with it. It's an experience to tell your grandkids.

M: We were asked a lot of questions about [how] you were on the Drive-Thru DVD and then you have that little DVD…a lot of people wanna know whether or not you're gonna come out with a full live DVD?

S: Um, we may in the future, as far as the Drive-Thru DVD, that's basically just rare, rare footage they catch of us and what's goin' on. But like I think a lot of people take from that - the band's, you know, a certain way. It wouldn't be funny to walk in to the band being serious, sitting around, so you catch them at like, their stupid points. But I think if we came out [with one], we'd be a little bit more serious…just…I'm sure we're a funny bunch [MATT laughs]…but….

B: When you write a song, do you start with music and then add lyrics, or the opposite?

S: Um…Ace basically…Ace writes a lot of…the music in the sense that he writes a guitar part…

M: I heard he writes on acoustic..

S: Like…he'll…he sits with an acoustic guitar all day 'cause that's what he loves to do - is play. So you know, he'll come up and be like "Aw, I got a good song, or that song," and we'll all put in on our parts. I don't even wind up hearing vocals, the total vocals, 'till the CD's been made, so…

B: Is Ace planning on taking his solo project out on the road?

S: Um, I'm not really sure what's going on with the solo project…like…yeah…you know, he did it, it's finished. So who knows, we'll see what the future holds.

B: You guys have a video in the works for any of the songs on the album?

S: Oh, we just shot a video for "Something That Produces Results." Which could either rule or be a complete load of shit; I don't know. It was us in front of a green screen, which is always awkward.

S: In L.A…flew out early before the tour started.

B: Is there like, a concept for it you can reveal?

S: It was basically like…they shot…you know, like shot scenes of…crap. We fake play…then you know, they…the video concept and all, it's like basically high-effect, all that shit goin' on…I don't know, we sorta don't worry about these things. That's why we're like "whatever." I think we just get off more on the writing music than playing live, but this is what comes with it.

M: What's the next point afer this tour? Another tour or…?

S: Yeah, for two weeks we do whatever, and then--

M: You have to play bit of the Warped Tour?

S: Yeah. Yeah, we're direct support on Less than Jake, and then we [take a break]. There's a certain time you're not allowed to tour before Warped Tour. It's just some sort of rule, I guess…and uh, we have main stage on warped Tour on the west coast.

M: And then after that, any plans?

S: Uh, who knows…takin' strides. I'm sure we'll tour some more, and then by next fall we'll--

B: If you weren't in a band, what would you be doing?

S: Skinemax. I don't know…I'm sure I would go to school just 'cause that's the typical thing to do, but it's not really what I'm into. I'd just…take it easy I guess.

B: What do you miss most about being away from home?

S: Your family, your close friends…it's kind of hard to have a girlfriend…because the girl doesn't really want a boyfriend who's never around…and if you have a girlfriend, it's never…you never get to see her, so--

MATRIX (THE VENUE) SECURITY GUY: Whoooa, guys [referring to the beer]…where's your ID? [SERGE points to the left towards the other side of the room] Let me see it. [SERGE leaves to get ID.]

TM: It's an interview.

SG: What else you got? This isn't you.

SG: Let's go. Come with me. [SECURITY GUY and SERGE walk past camera.] You got that? [sarcastically referring to filming of the incident] 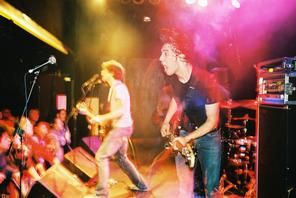 M: A lot of The Early November fans are kinda like, the young girls…?

F: We were in Chicago, and these kids come up, and they were hoarding Ace, and the security came out; they're like "Ace, you have to get out of here, 'cause it's getting really out of control"…like the girls…it was out of…I've never seen anything like that level…

M: I thought that was hilarious when I saw that, 'cause I was looking around--

M: Yeah, I know, I was lookin' around and the little girls are coming up with their pink sweatshirts and the 'LOL' shirts and I was just laughing.

M: So how was that actually?

Thanks to Serge, Fran, and Matt from the Early November for the interview.