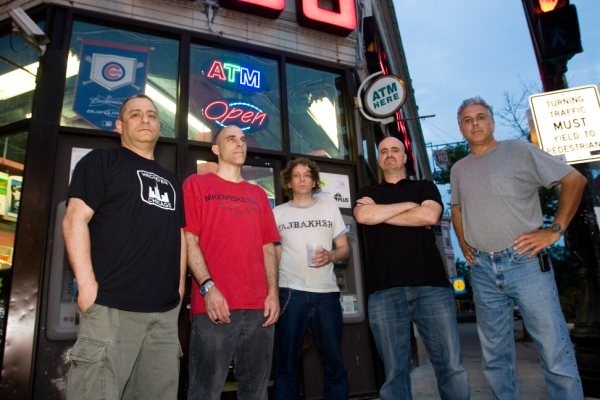 Articles of Faith was a Chicago–based hardcore punk band (1981—1985) notable for songwriting in a class above most of their contemporaries (and successors).[citation needed] The band's later work, the In This Life LP in particular, either founds or foreshadows the emo sound.[citation needed] The typical AoF song featured hummable melodies and conspicuous hooks, showing funk, reggae and jazz influences, accompanied by lyrics bemoaning the difficulty of finding freedom and fulfillment in a cookie–cutter mass–consumption driven society typically, but not always, delivered at a searing pace. While the band's influence was blunted by being based in Chicago, it maintained close musical and thematic ties to the Washington DC / Dischord Records scene. Drummer Virus X briefly left the band in 1984, due to the relative waning of the band's political emphasis, but returned to record In This Life. The band split up in 1985, with In This Life being issued two years later. The original lineup reunited for a European tour in 1991. The final show of this tour was recorded and issued as part of the Your Choice Live series.

Vocalist and guitarist Vic Bondi was a protest singer with leftist views. He went on to form Alloy and Jones Very after AoF's demise. At the time of AoF's original break up, Bondi was working as a history instructor at the University of Massachusetts Amherst. Bondi's subsequent day jobs included working on Microsoft's Encarta as managing editor of the Encarta Interactive English Learning edition (Bondi's comments on this fairly ironic form of employment can be found here ). Alternative Tentacles Records released the complete discography of the band in 2002. Bondi resurfaced with another politically charged band, Report Suspicious Activity, in 2006, and was featured prominently in the documentary American Hardcore.

In 2010, it was announced that Articles of Faith would reunite for an appearance at Riot Fest in Chicago and would be recording a new EP.