Semantic satiation over words like punk and rock. Distracted conversations loop in temples of commerce. Tracks are played on cracked iPhones, glossed through like pages of comics.

Years ago three kids holed up in their parentsâ€™ basement, loved Talking Heads, the Pixies, the Strokes, and made it. The founding members became good but stayed ruff. The scene is now disillusioned. Lalonde has been tinkering with the machinery of the universe. Seething with rage and ambition, he offers a succession of songs following the circuitous motion of tidal mood swings: optimism lurks menacingly in â€œStupid Dreamâ€ and â€œWe Made Itâ€, whereas â€œDonâ€™t Live Upâ€ and â€œShade to Shadeâ€ vibrate with radicalized ambivalence.

He performs with James Brown zeal; lightning hooks and staccato riffs. Mitchâ€™s bass bubblegum and heavy. Bad Andy is Eno from Roxy Music. Hamelin and Adam H on drums. Recorded in Toronto by Jeff McMurrich and mixed by Rusty Santos in New York.

Born Ruffians. The record is â€˜RUFFâ€™ â€“ simultaneously a return to form and a departure from expectations. Songs of refutation, lamentations of forgotten past lives, and ecstatic self-erasures that say â€œeat shit, we did it!â€. â€˜RUFFâ€™, as an idea, is everything â€“ sound, message, band. If â€˜Birthmarksâ€™ was polished and presentable, RUFF is the ugly innards that hide beneath. 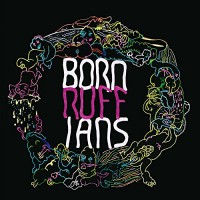