There’s something about Cabana Wear’s self-titled debut album that feels welcoming. Maybe it’s the evergreen combination of big guitars and even bigger hooks, maybe it’s the lyrics that so accurately convey the way small moments can feel so big, or maybe it’s just the effortless sound of four old friends making music without pretense. Whatever the secret, it creates a palpable sense of warmth and familiarity, the perfect soundtrack for looking back while still moving forward.

While Cabana Wear is a relatively new band, their friendships and musical collaborations date back well over a decade. Vocalist/guitarist Brian Mietz, guitarist Alec McVey, drummer Eric McConathey, and bassist Dan Saraceni grew up together in the New Jersey and Philadelphia punk scenes, playing in and supporting one another’s bands, and building the kind of bond that can only come from countless hours shared at sweaty house shows. As their other bands came and went, the idea for a new project took shape around their mutual love of ‘90s alternative and power-pop -- fittingly uncomplicated music made for uncomplicated reasons.

At 12 songs over a tight 31 minutes, Cabana Wear wastes no time in proving that complexity is unrelated to quality when it comes to great rock music. The band teamed up with engineer Dave Downham (Beach Slang, Pet Symmetry, Into It, Over it) to record at The Gradwell House, the beloved New Jersey studio where the members have each had formative experiences making albums. Cabana Wear wholeheartedly embraced those years of shared history and collaborative ease to make a record that’s nostalgic and fresh all at once. It’s a sound that intuitively compliments the unadorned sincerity and humor of Mietz’s lyrics as he documents all the excitement, anxiety, frustration, banality, and joy of a particularly transitional period in his life.

“Get Well” opens Cabana Wear with a few reserved strums before a feedback squall signals the jubilant wave of fuzzy guitars about to hit the listener. Mietz’s sweet-but-not-too-sweet vocal harmonies soon follow as he waxes wistful about childhood sick days watching game shows. The track’s final notes have barely faded when “Scaredy Horse” kicks in with the line “playing games isn’t always fun,” pulling the listener back into the present and the realities of adulthood -- but also the friendships that make it worthwhile. On tracks like “Bother You” and “Green,” the band seamlessly blends Rivers Cuomo-esque melody with Robert Pollard-like brevity to create satisfying alt-rock stompers; “Least Comfortable Me” and “Brewers and Connie’s,” meanwhile, explore the strange pitfalls of adult friendships over moodier tones.

Mietz wrote much of Cabana Wear shortly after quitting his longtime desk job and the end of a relationship, so existential doubt and uncertainty naturally touch the album. He never wallows, however, choosing instead to wink at life’s absurdities -- even making references to Metallica and TV shows with surprising emotional depth. The album closer, “Where I Am,” finds Mietz assessing the overall time period chronicled throughout Cabana Wear, singing “change of plans and change of places / Different folks, different faces.” It’s a bit of sadness, a bit of acceptance, and a lot of loud music being made by friends -- maybe that’s the secret after all.

It's a King Thing 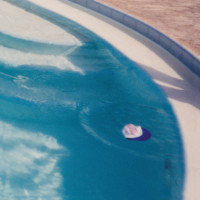