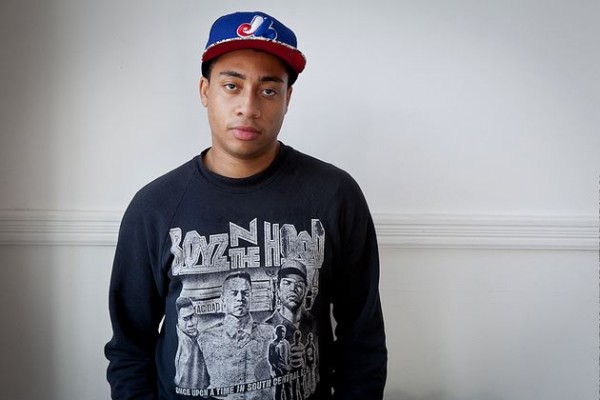 Photo: Tony Felguerias
"My dad said I was an afterparty baby; this goes out to all the accidents out there; keep on making mistakes" – the final words that resonate from the daring acapella lead track "Do I Miss My Friends–" on Cadence Weapon's highly anticipated sophomore release, Afterparty Babies.

In the course from his debut album Breaking Kayfabe to his sophomore record, Roland Pemberton has come of age. While most youths were struggling to focus on a sneaker brand for more than a week; the young (and underage) Pemberton would slip into clubs to play shows with Spank Rock, Lady Sovereign, Jurassic 5, TTC, New Pornographers, Final Fantasy, and De La Soul. He rocked guest performances with The Klaxons, Hot Chip and Islands; he remixed Lady Sovereign, Kid Sister, Disco D, Busdriver, Rick Ross/Simian Mobile Disco; he's been featured on tracks with Buck 65 and Anti MC. He inked deals with legendary labels, Epitaph USA and Big Dada for the UK and Europe; all before he was barely legal.

Pemberton is back and he is firmly establishing his legacy as a pioneer in a passionate crusade to push the rap and electronic music envelope. His new offering, a 14 track, 58 minute dance rap party epic is dedicated to all the accidents out there' as a testimony to Rollie Pemberton's first influence, his father, Teddy Pemberton. A native of Brooklyn, NY, Mr. Pemberton created The Black Sound Experience radio show on the University of Alberta's CSJR station in 1980, and is credited for introducing hip–hop to Rollie's hometown of Edmonton, the capital city of Alberta.

Following in his father's ground–breaking footsteps, Rollie discovered that he wanted to rap at the tender age of 13. His mother had other plans; she wanted him to pursue a career in journalism, so he attended journalism school in Virginia. Finding the insular environment stifling, the burgeoning rapper quickly decided to ditch the books in pursuit of his goal, and still, by 18, Rollie had established a name for himself as a tough music critic, writing for the Brooklyn–based Stylus webzine and the influential Pitchfork Media.

Rollie says he "wanted to make music that afterparty babies are created to" and the Afterparty Babies experience takes shape from this premise, but delves into it through friends and feelings, crews and club nights, hometowns and heroes, media and fashion. The recognized wordsmith continues to push the theme, surrounded by socially conscious commentary, and personal subject matter while dropping it over punishing electronic dance jams. Afterparty Babies is an almost un–describable explosion of ideas, feelings and musical genius fuelled by Mr. Weapon's experiences over the last few years as a writer, producer, touring artist and club DJ.