Photo: Josh Goleman
Cymbals Eat Guitars was founded in 2007 by guitarist Joseph Dâ€™Agostino and drummer Matthew Miller, who both graduated from Southern Regional High School in Manahawkin in 2006. Neil Berenholz, guitarist Matt Cohen, and keyboardist Daniel Baer joined the band after responding to an ad D'Agostino posted on Craigslist. 90's alternative bands such as Pavement heavily influenced the band's sound. An early version of the song "Share" was released on the Indiecater Vol. 1 compilation in June 2008.

The band first gained buzz in 2009 when their self-released debut album Why There Are Mountains was included in Pitchfork Media's "Best New Music", earning 8.3/10 in the website's review. Later that year, Cymbals Eat Guitars went on tour with The Pains of Being Pure at Heart and opened a couple of shows for The Flaming Lips. In addition, the band played at the 2009 College Music Journal festival and the Pitchfork Music Festival. In late 2009, the band was chosen as of one Beyond Race Magazine's "50 Emerging Artists," resulting in a spot in the publication's No. 11 issue (with Bodega Girls and J. Cole on the cover), as well as an exclusive Q&A for the magazine's site.

2009 also saw a change in Cymbal Eat Guitar's lineup. Dan Baer, the band's original keyboardist, left the band due to an illness, while the band's original bassist, Neil Berenholz, left due to his dislike of touring. Baer and Berenholz were replaced by Brian Hamilton and Matthew Whipple respectively.

In March 2011, Cymbals Eat Guitars signed with Barsuk Records to produce a follow-up to Why There Are Mountains. The band released their second album Lenses Alien on August 30, 2011. In May 2014, the band announced that their third studio album LOSE will be released on August 26, 2014.

Why There Are Mountains 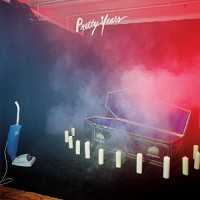