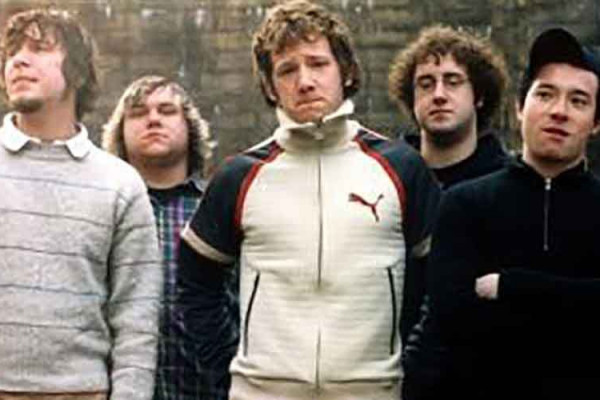 Photo: Triple Crown
Hailing from the foothills of Sussex County, New Jersey, Folly combines a slew of preposterous sub–genres, mixing elements of ska and punk with a more technically–bled metal and hardcore affiliate. This sonic discharge may confuse and bewilder, leaving many a scenester a skeptic; however, some may catch on to the originality in the Folly sound, the blending of polarities, and the blatant disregard to conform to any one sonance. Judging by a maniacal spin–kick come two–step gang–vocal infused head–walk/finger–point, it is safe to say that Folly's uncanny energy emitting from the stage is recycled two–fold by their crowds and committed, adored fans.

Throughout their 7–year tenure, there has always remained one unified idealogy surrounding this small inept community of dementia, from Anthony Wille standing on his drum throne taunting the skies to Arben Colaku's axe–chop guillotine bass–smasheroo. Whether or not Agim Colaku is breaking his own nose with his own guitar, guitarist–turned–shaman Geoff Towle is shyly mind–controlling his strings as vocalist Jon Tummillo is dressed up as a cow wearing a flee collar, screaming endlessly into a sea of abashed show–goers. Following the release of their Triple Crown Records debut album "Insanity Later," this quintet folk–force entered Big Blue Meenie Studio in Jersey City, NJ, to record their sophmore endeavor. Produced by Sal Villanueva (Thursday, Taking Back Sunday), "Resist Convenience" will undoubtedly leave everyone scratching their heads, asking "Wait... Huh– Did that just happen–!– Where are my pants–" Keep an eye and ear open for Folly has initiated a relentless touring schedule and will most likely be sleeping on your living room floor in no time, trying on your parents' clothing, making long–distance phone calls, and eating all of your favorite snacks.