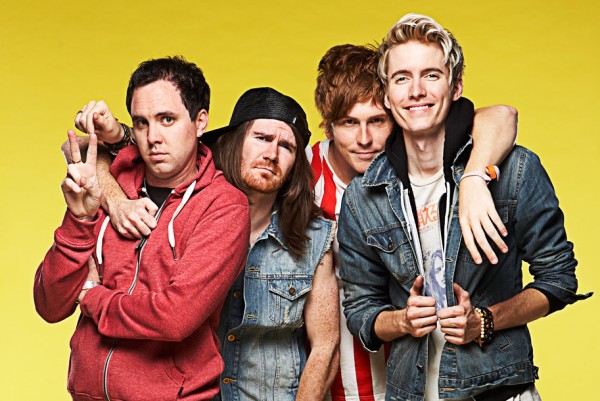 Photo: Evan Hunt
Forever the Sickest Kids' roots date back to the members' childhoods. Marc Stewart (guitar) and Kyle Burns (drums) are stepbrothers[2]. Stewart met Kent Garrison (keyboard) in high school. Then, when Garrison went to college, he met up with Jonathan Cook (vocals) and Austin Bello (bass guitar). For a while, Turman and Bello played together and called themselves Been Bradley[3], while everyone else from Forever the Sickest Kids played with The Flipside. In late 2006, both of those groups reached a creative standstill, and Forever the Sickest Kids was born.

While browsing PureVolume, lead singer Jonathan Cook accidentally spent $350 that the band didn't have to receive a front page placement of a song that they also didn't have. For this reason, they went into the studio and wrote "Hey Brittany", then recorded it with their producer Geoff Rockwell in a matter of days. Since it was first posted, "Hey Brittany" has garnered many Internet plays and triggered a bidding war among eight major labels. On April 24, 2007, Universal Motown emerged victorious, and released the band's Television Off, Party On EP on July 3. The releases of The Sickest Warped Tour EP and the Hot Party Jamz EP would soon follow.

The band supported All Time Low and The Rocket Summer on the 2008 Alternative Press tour from March 14th to May 2nd. The band played with Metro Station, The Cab, Danger Radio, and The Maine on their first headlining tour, and just finished up the 2008 Vans Warped Tour. They appeared on Late Night with Conan O'Brien on June 12, 2008. During one of the Warped Tour stops, they headed to Tokyo, Japan to perform at the annual Summer Sonic Festival. In late September, the band will undertake a brief headlining tour in the UK, after Cobra Starship, the original headliners, postponed their tour until February. The band will also be holding the Sassy Back tour throughout October and November 2008 with Cobra Starship, Hit the Lights, and Sing It Loud.