The Groovie Ghoulies are a pop–punk band from Sacramento, California in the 1990s and 2000s.

They are heavily influenced by The Ramones, The Dickies, 1960s garage rock artists such as The Seeds, early glam rock bands such as the early works of The Sweet and Suzi Quatro, and bubblegum artists such as The Troggs, The Monkees, The Ohio Express and early Neil Diamond. They have done punkified covers of several of Diamond's songs, such as "Kentucky Woman" and "Look Out, Here Comes Tomorrow".

They have released albums on the independent Lookout! Records, Springman Records, Stardumb Records (Netherlands), and their own label, Green Door Records. Several of these releases have been produced by reknowned producer Mass Giorgini, whose credits include bands such as Alkaline Trio and Rise Against, and who has co–produced with Billie Joe Armstrong of Green Day and Kris Roe of the Ataris.

Many of their songs have monster, horror and science fiction themes.

The band is comprised of Kepi, the vocalist/bassist/frontman; Roach, the guitarist and occasional backup vocalist; and Scampi, the newcomer to the band and drummer.

Fun In The Dark (retro review)

Fun In The Dark 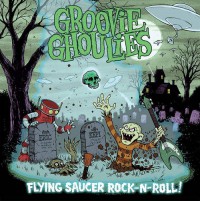