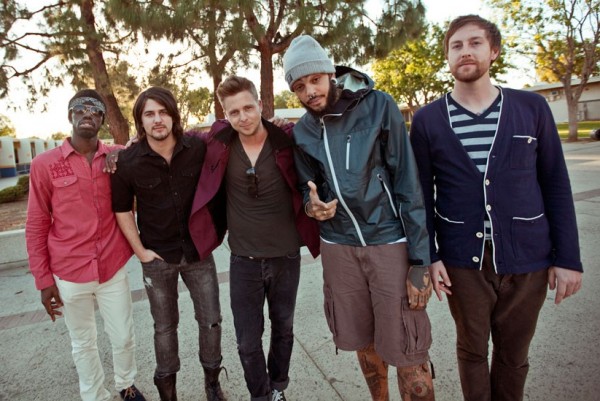 Photo: Quang Le
If you thought Gym Class Heroes were difficult to categorize in the past, with their latest release, The Quilt, itâs literally become impossible — and we mean that in the best way imaginable. In fact, the follow–up to 2006âs gold–selling As Cruel As School Children doesnât just see the band expanding on their unique blend of hip–hop, rock, soul and punk, but transcending it.

When childhood friends Travis McCoy and drummer Matt McGinley decided to start a band in upstate New York over a decade ago, they could have never anticipated how successful Gym Class Heroes would eventually become. How could they have predicted having a record–setting #1 single with âCupidâs Chokehold/Breakfast In Americaâ or taking home the trophy for Best New Artist at the MTV Video Music Awards– And yet, they take it all in stride and see it as another source of inspiration.

âEverything that's happened to us in the past couple years has been a part of this bigger thing, so all the experiences that we've been through with success and everything is a patch in our quilt,â frontman Travis McCoy responds when asked about the significance of their new albumâs title. âWe kind of had to blanket ourselves in all the hard work, and, in the end, everything paid off because we ended up with a pretty dope record.â

In order to fully realize their sound this time around, the band — which also includes guitarist Disashi Lumumba–Kasongo and bassist Eric Roberts — recorded much of their music together live in the same room. They also enlisted a diverse roster of producers, including Cool & Dre (The Game, Ja Rule), The–Dream (who penned Rhiannaâs smash âUmbrellaâ), and longtime friend Patrick Stump from Fall Out Boy to craft a diverse collection of songs that truly showcases how much Gym Class Heroes have grown both musically and as people over the past few years. âI'm really anxious and curious to see how people are going to receive the record because we definitely put a lot into it,â McCoy explains. âI think the last record was a lot more playful; this one is still playful in some points, but it's serious in some points too.â

The playful part definitely comes through in the albumâs first single, âCookie Jar,â with McCoyâs carefully constructed metaphors. Featuring The–Dream, the carefree summertime anthem has a decidedly urban dance club feel, and sounds unlike anything the band has done in the past.

âI feel like we've proven ourselves at this point, which is why we can make a song like âCookie Jar,ââ he continues. âI think the last thing we wanted to do was go into this record with a preconceived vibe; instead we just wanted to write songs that felt good to us — and if theyâre cohesive and well–written you won't have to worry about if they donât all sound alike.â

Correspondingly, The Quilt is, in fact, far more diverse than anything Gym Class Heroes have penned before and takes their groundbreaking sound to the next level both musically and lyrically. From the neo–gospel track âGuilty As Chargedâ (which features a cameo from West London sensation Estelle) to the hip–hop anthem âPeace Sign/Index Downâ (which features an enthusiastic guest appearance from the legendary Busta Rhymes) to âLike Father, Like Son (Papaâs Song),â a timeless pop–soul cut built on a simple piano melody that serves as the perfect backdrop to McCoyâs reminiscing about how his childhood made him into the man he is today — itâs all there. Then thereâs âLive Forever (Fly With Me),â which features vocals from Hall and Oates co–frontman Daryl Hall, one of McCoyâs musical idols, and exemplifies one of those serious sides on the album.

âI'm a huge Hall and Oates fan, so the fact that we worked with Daryl Hall makes that song really personal to me,â the six–foot–plus frontman gushes. The track also strikes a personal chord lyrically, having been inspired by the loss of McCoyâs cousin who committed suicide last year, something the casual listener might not catch the first time. âIâve always been intrigued by songs that seemed innocent or seemed fun and playful, but if you really listen to it there's a lot more than what you see on the surface,â McCoy confirms.

McCoy is also quick to point out how much everyone stepped up their game for The Quilt, particularly Lumumba–Kasongo, who plays a Van Halen–worthy guitar solo on âHome.â

âOh that dude took a couple steps up on this record,â McCoy says with a laugh. âWe didn't get to showcase Disashi as much as we wanted to last time, but on this record he really got a chance to shine, which is beautiful because he's such a talented guitarist.â

And yet with all of their successes and the subsequent growth the band demonstrates on The Quilt, McCoy claims that theyâre still just getting started. âI think the day weâre satisfied or content with where Gym Class Heroes is, is the day we find something else to do,â explains McCoy. âOnce we feel like we're not hungry anymore, it's time to find something else to do,â he summarizes. âBut right now we're just as hungry as we were four or five years ago... in fact weâre starving.â

As Cruel as School Children