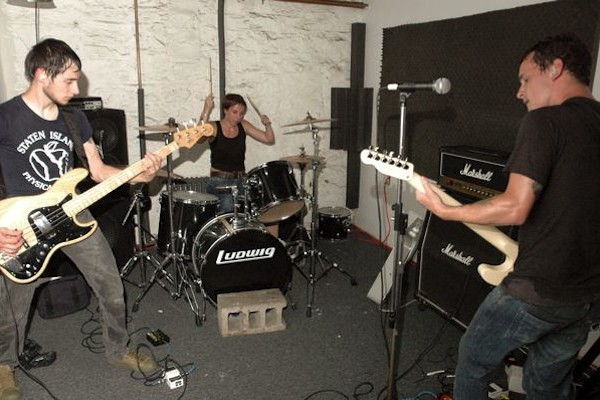 Photo: Elizabeth Amoroso
Although the book on Lagrecia has barely begun, you can expect great things in the near future. Lagrecia is a brand new project started by Jason Shevchuk (formerly of Kid Dynamite and None More Black), Dana Berkowitz (formerly of Red Sparrowes), and Sal Dellaquila. Jason is best known for his part in Kid Dynamite and None More Black. When None More Black disbanded, Jason had no intentions of starting another band. Instead he had planned on writing and recording a solo record under the name On Guard. When we had caught wind of On Guard, I wrote Jason letting him know of my interest in putting out something for his band and as luck would have it, he wrote me back and said that he would be interested in doing something.

As writing and demoing continued, Jason had contacted Dana to record the drums. As the two worked together, things just came together. Jason said, âDana and I have been writing and itâs going way better than I had hoped. Itâs some of the coolest shit Iâve done (but then again i say that about everything new). I think we are actually gonna be a band. I thought it unfair to dictate the name of the group just because I was doing it solo.â A recent trip to Richmond inspired the band to find a name, LaGrecia. In a Myspace blog,