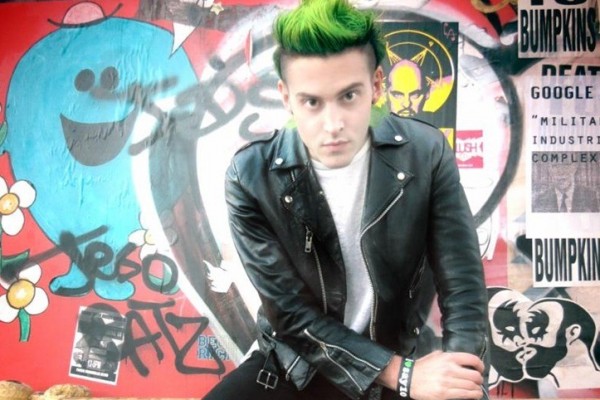 Music saved me from a dysfunctional life in Youngstown, Ohio. I was raised in a house where physical, substance and mental abuse were the norm. When I was young, my parents fought constantly, so I would slam my bedroom door and play Green Dayâs Dookie as loud as I could, singing those songs over and over to myself.

I knew then that music would be my escape.

I started playing guitar when I was 12 and started playing in a couple bands that were pretty popular in the local scene even though I couldnât wait to get the hell out of Ohio. After graduating high school, I started a group called Cherry Monroe and I worked my ass off to get us heard. There wasnât a place I didnât pass out our CD – malls, schools, gas stations, you name it – and all the hard work seemed to pay off when we earned a huge following and got signed by Universal Records.

I thought snagging a record deal meant Iâd be given bags of money and life would be one big party. I didnât take my career seriously at all and the band was dropped a year later. My life was spiraling out of control: I lost my full–time gig, my parents got divorced and both my mom and grandfather got locked up in prison. Why would I stay and rot in Youngstown–

I had nothing left to lose so I said fuck it, put my whole life in my shitty Honda Civic and drove out to Los Angeles. Talk about a reality check. I went from performing to thousands of people to playing an acoustic guitar next to weirdos dressed up as Batman and SpongeBobSquarePants on Hollywood Blvd. I mayâve escaped all my family bullshit, but I was still completely depressed by the wrong turns my life had taken.

Inspired by the storytelling of Bob Dylan, Oasisâ Noel Gallagher and, of course, Billie Joe Armstrong, I locked myself in my one–room studio apartment and started writing about all the fucked–up stuff Iâd gone through. I wouldnât shower or go outside for days. I was so angry and frustrated but found out that when I was able to harness my emotions, I was beginning to find myself–– and my voice as a songwriter.

I took shitty temp jobs to keep the lights on, but I was determined to make it with my music. Once I built my confidence back up, I started posting all my songs–both covers and originals–on YouTube. People seemed to really dig it and it wasnât long until I landed my second record deal. This time, though, I swore not to take a goddamn thing for granted.

When producer Rob Cavallo (Green Day, My Chemical Romance) agreed to produce my first album, I cried like a fucking baby. I just pictured being that little kid in his bedroom, listening to Dookie and dreaming of this moment. I canât wait to share all the songs on Straight To Hell with my fans. The record is all about how hard life can be but you canât let the small stuff bring you down. Thereâs a lot of shit you canât change, so make an effort to enjoy every minute. You can turn any kind of energy into something positive. If life gives you lemons, make a fucking drink.