Neurosis is a post-metal band, based in Oakland, California. They formed in 1985 as a hardcore punk band, and their sound progressed towards a doom metal style that also included influences from dark ambient and industrial music as well as incorporating elements of folk music. Terrorizer Magazine described Neurosis as "arguably the most influential band of the past two decades."

In 1986 Chad Salter was added on second guitar, and in 1990, Simon McIlroy joined the band as a synthesizer/sampler. There have only been a few changes in the lineup of Neurosis's musicians since the band's inception. In 1989 Chad Salter was replaced by Steve Von Till, and in 1995 Noah Landis, a childhood friend of Dave Edwardson, replaced Simon McIlroy.

With The Word as Law, Neurosis began to transition from the hardcore punk of Pain of Mind to the more experimental sound of Souls at Zero, which would ultimately form the basis for post-metal. Neurosis' signature sound came into full force with Enemy of the Sun, with The Quietus observing that "at the time few could have predicted this black hole of agonizingly precise metal riffs, unnerving backmasking, industrial folkisms and extensive sampling". 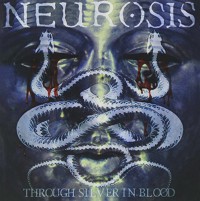 Through Silver in Blood [Vinyl]