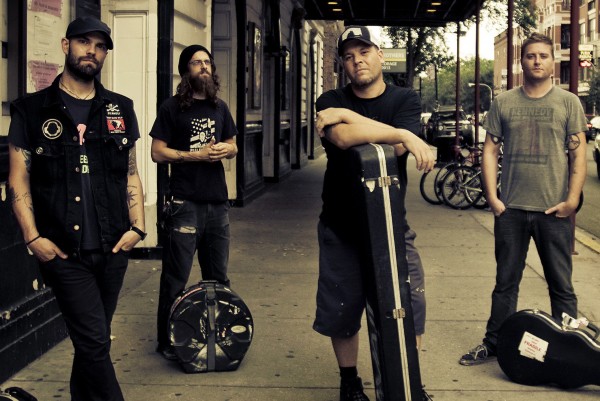 Photo: Katie Hovland
The band originally formed in 1998, when western Massachusetts natives Joe McMahan (lead vocals and bass, got together w ith Chris Brand(guitar), Bill Ironfield(guitar) and Nick Maggiore (drums), hailing from New Hampshire. Originally callin g themselves Jericho, the boys released their debut album, When the Battery Dies, in 2000. After the release of this rec ord Chris Brand left and Jeremy Cochran replaced him. Their fan base grew as they played DIY basement shows and small cl ubs throughout the Northeast.

When living in Boston proved too expensive, the quartet moved to Richmond, Virginia to explore the punk rock scene and t o work on their second album. This is when Bill Ironfield left the band, and Ken Gurley joined on bass, with Joe McMahan taking over guitar.

It was at about this time that band was contacted by a 1970s–era Christian rock band from Australia, also called Jericho , to inform them that the name was already taken. To avoid confusion and legal action, the boys politely amended it to J ericho RVA. The initials were a nod to their adopted hometown of Richmond, Virginia.

Jericho RVA is the name that appears on their 2003 EP Workers' Union. An older version, released under the original name (Jericho), does not include the song "Oxygen" that is on the Jericho RVA release. The other 6 songs of the EP are the s ame on both records.

Due to the strength of the Worker's Union EP, Smoke or Fire were approached by esteemed California punk rock label Fat W reck Chords in late 2004. Their debut album, Above The City, was co–produced by Fat Mike of NOFX and was released in Mar ch 2005. Since then the band has toured the US and abroad many times over. The band released their second album This Sin king Ship on February 20, 2007.