The Libertines emerged along with a glut of garage bands in the wake of the mainstream success of the Strokes, the White Stripes and the Hives. The London act featured the songwriting team of guitarist / vocalists Carl Barat and Pete Doherty with the rhythm section of bassist John Hassall and drummer Gary Powell. The band released two albums before imploding, both of which were produced by Clash guitarist Mick Jones (and the latter engineered by Sex Pistols engineer Bill Price).

In their short time together the Libertines proved to be one of the more storied bands of their genre, with the behaviour of Pete Doherty in particular feeding a frenzy of attention in the UK tabloids. Repeated attempts to clean up Doherty's drug habits failed and split the band. The Libertines completed their final tour in 2004 with American guitarist Anthony Rossomando standing in for Doherty, and ceased activity soon after.

Doherty remains in the tabloids for a series of arrests and scandals, touring with his new band Babyshambles. Carl Barat started Dirty Pretty Things as a vehicle for his songwriting, recruiting Gary Powell and Anthony Rossomando among that group's lineup. Bassist John Hassall formed Yeti. 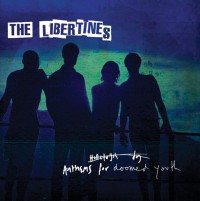