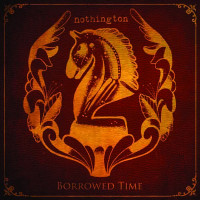 Even by the first track, "Captive Audience", Nothington's Borrowed Time seems to pack more energy in it than a Rockstar packs caffeine. Seemingly more lively than 2009's Roads, Bridges and Ruins, Borrowed Time is solid from the get-go. Utilizing both vocalists more aptly than ever before, this album could be considered Nothington's Oh! Calcutta!.

Clearly geared toward the ideas revolving around the working class and long stretches of touring, the energy behind the album emanates power that can only be fueled by exhaustion. Especially coming through on "Far to Go", "End of the Day" and "Hopeless", this album is relatable on a level that only individuals who have put themselves through strenuous living would understand.

Everything comes together swimmingly, deepening with every track of the layered vocals, harmonization, and cutthroat percussion. Each song begins with a different energy than the last; however, it builds and builds, all the while continuously surprising the listener with every line.

Borrowed Time refuses to relent, and only until the album reaches finality does it weaken in any way with the last track "I Should Say" being the weakest on the album. It is darker sounding than the rest, eventually reverting back to the stylistic implements that make the rest of the album good, however still wavering slightly and not fitting with the overall feel of the remainder of the album.

As a whole, though, Borrowed Time clicks. Its power, aggression, fire, and perseverance entrance the listener in the life portrayed through a lyrical styling that can best be described as, well, hopeless, in the best way possible. Not to say that the album or Nothington are hopeless. No, not at all. The opposite, in fact. Borrowed Time is a key album this fall and would make a great addition to any avid listener's collection.

Night Birds: The Other Side of Darkness