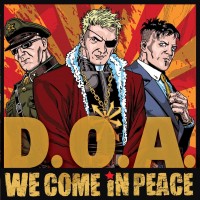 I can still remember when I first heard D.O.A.âI sat in my friend's bedroom and he played me War on 45 and I was blown away. From then on D.O.A. became quite a fixture in my listening endeavors, and my first live experience of them, which left another friend bloodied but unbowed, literally, was something I'll never forget as the band was really in its prime. However, it's now about 18 years since I last saw Joey "Shithead" Keithley and whoever is backing him live, and I've also missed the last few D.O.A. releases too, so this new album released 35 years after the band's inception is a chance for me once again board the D.O.A. express and catch up with a band that has never waned in its contempt for authority and lawmakers.

"He's Got A Gun" opens proceedings and it's a slightly average, mid tempo effort in which Keithley's (not sure how long the "Shithead" element has been dropped for, but I must say it seems the right move for the older gentleman!) guitar sounds as scratchy and choppy as ever whilst his voice seems to have stood the test of time rather well. In fact, there are times on the album in which I'm sure Keithley's voice has a much more melodic quality to it, occasionally sounding less gravelly on the odd lyric.

OK, not the strongest start but "Boneyard" certainly adds more of a punch to the album with a quicker pace and much more presence to it. "Dirty Bastards" begins with some bagpipes (I hate bagpipes) and for one moment I'm afraid that there will be some tenuous link to Scotland/Ireland thrown in but it doesn't seem to follow on in that manner and ends up being a decent song with a catchy chorus.

"Do You Wanna" provides some more frantic paced punk rock and Keithley is assisted vocally by Ben Kowalewicz of Billy Talent on this 135-second romp, whilst "Bloodied But Unbowed" slows things down a bit and is a hugely enjoyable song that has me singing along on its first play.

"Bring Out Your Dead" is closer to classic D.O.A. than any of the other tracks on this album in terms ofâ¦well, everything other than the content of the song, which seems to have some kind of zombie element to it. Not something I ever thought would have been the basis for a D.O.A. song, but then again it's damn catchy so I'm not complaining. This track also sounds as if it could have been on 1989's Last Scream of the Missing Neighbors with the whole pace and drive of the track being hugely reminiscent of that album.

The cover of Toxic Reason's "War Hero" is a great reggae version of the original and is as unsettlingly germane today as it was when first released. For some reason this track reminds me of Stiff Little Fingers, although I can't really put my finger on exactly why? The great bass action found in that cover also forms the thick backbone for "We Occupy," the first single off the album, which features a former D.O.A. collaborator, Jello Biafra, for a lyrical gem of a track celebrating one of the few protests in recent years that has gained more diverse support than any other across the globe. It's good to hear Keithley and Biafra together again, as their voices have always seemed to work well together (Last Scream of the Missing Neighbors has always been a favorite of mine and a lot of that is down to the vocal collaboration of the two veterans).

The flipside of the single is up next and "Who The Hell" is a raucous condemnation for the rich and corrupt one percent that are the focus of the Occupy movement across the world and shows that D.O.A. still have it in them to fight the good fight.

"Lost Souls" is an acoustic, catchy song with a brief, warm guitar lead that highlights the variety on this album, and also shows that it's not all about ranting and railing against the system. "Man With No Name" has a spaghetti western feel to it, which it should due to its title, and that goes for the lyrics too, which includes "a fistful of dollars" to add to the Clint Eastwood references.

Next up is a slight curveball with D.O.A. covering "Revolution" by the Beatles and in doing so putting their own inimitable stamp on the song. I'm not a big fan of the Fab Four but this Tasty Trio do well in making this song much more than listenable with an infectiousness which has me getting quite jiggy!

"Walk Through This World" has got to be influenced by the reggae/dub of the Clash's "Bankrobber" as it seems to use the same bass line at times and once again if offers more proof that Keithley and his two associates in the band are far from ready to settle down into an existence in which they rely on rehashing balls out punk rock until they're too old to wield their instruments.

Closing with an acoustic reworking of "General Strike" (a 1983 single that also featured on 1985's Let's Wreck The Party album), it's obvious that age has not quelled D.O.A.'s determination to fight for what they believe in and that the maxim "Talk â Action = 0" is still relevant today as it was all those years ago when Keithley began his musical career.

I'm pleased to be back on the D.O.A. train as there is more than enough proof here that the music and message is still going strong, imbued with more variety than many of the older generation of punks can muster on their newer material. All in all, this is a strong and consistent album and any fan of D.O.A. will probably find it meets their expectations, whilst those who have little, or no, knowledge of the band should really give this a go.