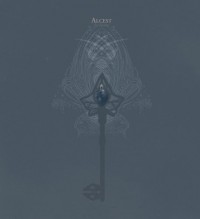 The difference between the 2011 rerecorded version of Alcest's Le Secret and the original 2005 edition is vast. Central figure Niege has a pretty firm grasp on how his band should sound, so the fact that he would choose to rerecord the songs instead of just remastering them says a lot. In every conceivable way–recording quality, playing–Le Secret is better the second time around.

Some paintings don't need more brushstrokes, but this isn't one of them. The original two-track, 27-minute collection, by comparison, sounds like a really good demo. The lower audio quality complements the band's shoegaze elements, but it also robs the songs of dynamics. These tracks switch gears a lot, but the listener doesn't really feel the transitions as well. Put it another way; you can't tell what Bilinda Butcher is singing on My Bloody Valentine's Loveless, but her voice still feels like an instrument and it adds color. Niege sings in French anyway, but his voice barely registers.

Per the liner notes, Niege was never truly satisfied with the original EP. With more experience and better technology, he's able to bring out the songs better. And while they're not quit on par with what Alcest ultimately became, this debut EP is still an excellent showcase. Niege drops dreamy vocal hooks over guitar squalls that challenge Jesu for supremacy. The black metal elements aren't in place yet, but the use of blast beats livens up these lengthy, atmospheric tracks (as do the sections that surprisingly border on pop-punk, like the 9:30 mark in "Le Secret").

While Alcest ultimately went on to higher creative works, Le Secret in its new form reveals a band that was set from the beginning. While the original recordings are interesting in a historical sense, the 2011 edition is essential listening.