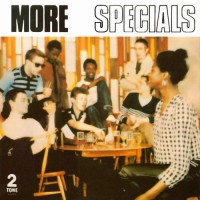 It's all in the title–More Specials delivers on everything that made the Specials' first LP so great. More punk energy, more two-tone ska rhythms, more blending English humor mixed with Jamaican songwriting. It's definitely a sophomore album, diminishing returns and all, but that quality has led to it become one of ska's more underrated albums.

Given that The Specials had some monstrous tunes ("A Message to You Rudy," "Little Bitch"), More Specials can't help but feel like a retread. But it's also such a remarkably solid, smartass album. A cover of "Enjoy Yourself (It's Later Than You Think)" announces the record on a snarky note, calling for the listener to give into life's revelry before he/she dies (Choice lyric: "My name is Terry and I'm going to enjoy myself first"). Frontman Terry Hall sounds more assured on the mic this time around.

Speaking of mic control, toaster Neville Staple has a more pronounced presence here as well, especially on tracks "Man at C&A," "Sock It to 'Em J.B." and "Stereotype/Stereotypes, Pt. 2." Staple's chants give the songs a more pronounced dub vibe. The Specials is great, but More Specials actually feels closer to dub spirit.

Hall and Staple complement each other lyrically as well as musically. Staple has a more serious tone, usually with some sort of socio-political conscience at play (well, besides the song where he just lists James Bond movie titles). Hall is way more sarcastic (Per the chorus to "Pearl's Cafe:" "It's all a load of bollocks"). Between the two, More Specials finds a nice equilibrium.

Boosted by some choice guest stars (the Go-Go's, Lee Jay Thompson from Madness), More Specials is better than its reputation might suggest. Given that the original lineup for the Specials didn't last much longer after its release, the album also serves as a fitting finale, given or take some choice singles from 1981.

This Is Your Life: Before We Fade Away