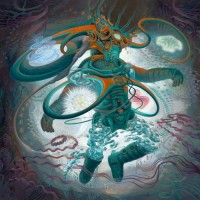 When it comes to Coheed and Cambria, especially at Punknews, I can hear the "Claudio's got a whiny voice" argument versus the "Is this emo? metal? Progressive rock–what the hell is it?" tirade forming already. Well, at least the hot topic's gonna be debated to the bone. That aside, Ascension doesn't do its job fully to help CC stand the test of time and stamp their authority on whatever genre Claudio's interested in these days.

"Hollow" is not the opener you'd want as it's a drab instrumental that sets the tone for the fanboy "MAINSTREAM versus OMG it's another concept record" bitch-fit. Sure, there's a lot of improvisation and I'm sure fans would say "pioneer" techniques following on the record, but it boils down, once again, to an imbalance in the mix, style, layout and overall structure of the album.

Year of the Black Rainbow and both volumes of Good Apollo failed to recaptivate the essence and allure of In Keeping Secrets... and The Second Stage Turbine Blade which helped reinvent CC track-by-track. This record though capitulates in its own storytelling as there's just too much plot. It's haphazard at times and CC really needed to condense it or leave it for Armory War comics. After all, Tom Morello's Orchid and Gerard Way's Umbrella Academy/Killjoys left them enough canvas to expand on their pretentious concepts.

"Domino The Destitute" has that progressive metal feel to it, but it's that one where you realize why metal fell off. I really hoped it could be this year's "Delirium Trigger" but amid jagged riffs, it just goes on too long, and this is where the whining about conceptual bands, stories, comics and pretentiousness seeps in more and more. "Afterman" however is an intricate ballad that shines well in its own endearment and sentimentality–a song about the loss of a loved one and the impact of Death. It translates sympathy into sorrow. Touching indeed amid the rhythmic guitars. "Mothers of Men," "Hollywood Cracked" and "Evagria the Faithful" all meander from that home run Claudio Sanchez intended although "Goodnight Fair Lady" chimes in with an out-of-place pop beat akin to "Favor House Atlantic," and I guess some levity was needed to break the monotonous diatribe.

"Vic the Butcher" does manage to add some punch to the record with silky power-metal riffing that holds its own in its self-inflicted dissonance. You didn't think CC would leave out a track filled with that kind of discord, right? I give them full-effort for looking to stir the pot up with their music and story. They never fail with that but it's time the musical aspect stops suffering on account of "I have a high concept story to tell."

This record has its bright spots but they are few and far between. The shortfalls really make the record struggle to attain a fluent tone and cohesive feel. Then again, which CC record really sticks to a streamlined sound and laminar flow? None right? It's all about turbulence for them! Someone needs to tell these guys though to stop trying to be the Grant-fucking-Morrison of the music industry. It's not an awful record, but it isn't one that's gonna stand out when you look back on 2012.

Big D and the Kids Table: Built Up From Nothing: The D Sides and Strictly Dub