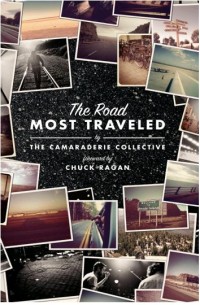 If you have yet to pick a copy up of The Road Most Traveled, then it is a good thing you're reading this now. I'll admit I was hasty when I ordered my copy and as soon as I began reading I became disappointed. Not entirely on the contents of the book. More so in what I thought I was getting in place of what I had actually got.

Be warned. This is not a book about crazy and fun tour stories. When I had ordered my copy I wasn't exactly expecting the entire book to be like that, just to a higher degree. The back cover reads, "The Road Most Traveled is more than just a collection of anecdotes [which it hardly is], it's as much a handbook [which is a better description] >o?of how to act on tour as it is a cautionary tale of what not to do if you want to sustain this lifestyle for years to come."

I was not expecting a book on how to behave on tour, given our very own site reported otherwise. To be perfectly honest, this collection should be reduced to a sentence in the form of a mandatory tattoo on the back of one's hand reading "Don't Be An Asshole," to anyone and everyone who travels full time as part of their job.

Other than a number or pieces, the writing is sub par. They reek of first drafts written in the email box to Mr. Ragan. I doubt that Ragan did much editing at all other than running them through a spellcheck, which should have fixed the two pieces that are just littered with capitalization errors. In a way, it is expected, as the majority of the collective are not professional writers. What I mean by that is that the ability to write good lyrics does not translate to being able to write good prose.

A major factor in why I did not enjoy the collection as much as I could have, is the length of the pieces submitted. I assume they were kept short (one-two pages) as to include as many contributors as possible so we as an audience can hear a little from everyone. The main problem is that most of the pieces don't offer any real advice other than "Don't be an asshole" thinly mixed in their tale of debauchery or personal observations, to an audience of an inexperienced touring band or performer. Truthfully speaking, if you are not a performer I wouldn't recommend that you read this at all. It is not essential, but I know this review won't stop you.

I would also like to point out the huge editorial fuck up in Rob Huddleston's (Inquisition, Ann Berettta, solo artist) piece on "R.E.S.P.E.C.T." As he is ending his point about fans, and we move to page 79 we are met with point number four. I don't know if the paragraph on fans was point number one or not, but points two and three are completely missing. His section ends after point number six.

I find that Virgil Dickerson (Suburban Home Records) has written the best advice collected in this book. He writes "20 Things To Consider Before Heading Out On Tour, From A Label Perspective." Other writers offer up some great advice as well, but it doesn't come as often as it should. It's great that some of it comes from unlikely sources (Yo-Yo demonstrator, professional bus driver, poet).

In the next five lines I hope to summarize the best and most important advice for you.
1. Don't be an asshole, to anyone!
2. Say "Yes" to opportunities.
3. Get out and experience the cities/cultures you are visiting.
4. Know when it is a bad time to be getting high/drunk and don't do it or ensure you're with a sober friend.
5. Always put on a great show, no matter how many people show up at the door.

As a final note, as you can see I rated this book 2/5 stars. That rating is for the ordinary reader. If you are in a band or performer, I elevate my rating to 3/5 stars as the good advice does pertain to you.