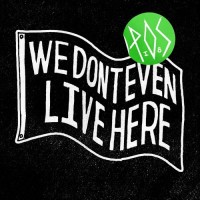 P.O.S. an artist who has done more than avoid being easily categorized, he has seemingly fought against it at every turn. With 2006's Audition he strung together thematic instrumentals and produced tracks like "Yeah Right" (featuring Travis Bos of Chariots), which would be more at home at a Dillinger Escape Plan show than at a Rock the Bells Concert. 2009's Never Better expanded the instrumentation of the tracks to include rapid fire drums ("Drumroll" [duh]) and a volley of electronic glitches (not to mention some dude from Kid Dynamite). Between solo albums, P.O.S. has been a part of punk act Building Better Bombs and noise act Marijuana Death Squads. It's hard to imagine P.O.S. could do anything to surprise fans and yet by stripping down to 11 tracks and making the most direct album of his career, that's exactly what We Don't Even Live Here does.

The first thing that stands out about We Don't Even Live Here is its general brevity. At 11 tracks it's P.O.S.'s shortest album track-wise (with four less tracks than Never Better and five less than Audition or Ipecac Neat). However, what P.O.S. does with those 11 tracks is take his disgust at...well pretty much everything and aim it with laser precession at every single target he wants to hit. This isn't metaphors and vagaries, this is an album with tracks titled "Fuck Your Stuff" with lines like, "Or in a book, discussing Christopher Hitchens, or how to make bombs out of stuff you find in your kitchen." We Don't Even Live Here doesn't masquerade as enlightened, "everyone work together" hip hop, it delivers a full force view of P.O.S. and exactly what he believes, whether it's right or not and whether you like it or not.

The level of unapologetic calling out of people's bullshit is one of the most refreshing portions of We Don't Even Live Here. Contrast P.O.S.'s approach with Lupe Fiasco, who even in his recent song "Bitch Bad" simply uses the context of any generic rapper using the phrase "bitch." The rapper in that song could be any number of generic, no name artists. By contrast P.O.S. is willing to call out some of hip hop's biggest names with lines like, "It's in a black man's soul to rock that gold? / Naw, it's in a black man's soul to take the chains off / It's in a black man's soul to roll free / It seems like a black man's role is to fold cheap" ("Wanted/Wasted"). This isn't random name calling, this is specifically calling out faulty logic which enables the lazy status quo to continue, and it's exactly what he refers to in "How We Land" with, "Ain't no sense in mending any fences they break."

Musically, We Don't Even Live Here hits all the bases P.O.S. fans are hoping for and even breaks in some new ground. "Bumper" kicks the album off with a strong tie to "Drumroll" off Never Better; pounding drums and electronic blasts give listeners an instant connection and lets them know what kind of a ride they're in for. For the most part tracks pound out with dark, ominous beats that cradle the dark subject matter perfectly. As the album carries on, tracks like "All of It" and "Weird Friends" build in franticness, which embodies the building rage of the album. You can feel the record growing from frustration to disgust and eventually into a full blown rage. It isn't until the album closer, "Piano Hits" (featuring Isaac Gales of Marijuana Death Squads), that the album reaches riotous proportions and seems to lose all control, like a growing demonstration that suddenly turns to a riot, it is the all encompassing fire that serves as the only natural destination for this album's trajectory.

Though P.O.S. only recently announced his medical issues regarding his failed kidneys, it's hard to listen to We Don't Even Live Here and not take his health into consideration. This album absolutely explodes with the urgency of a man who understands mortality. We Don't Even Live Here wastes no time and beats around no bushes. This is a full force, direct assault by a man who has as little concern about being diplomatic or civil. The only real problem is, with the release of We Don't Even Live Here what is P.O.S. going to have to come up with a something else to call 2009's Never Better, because he definitely got better.