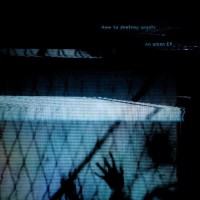 Trent Reznor once said that Nine Inch Nails didn't have much in rarities because he rarely had any ideas left over when he finished an album. They either made it to the record or died off right away. So it's fitting that NIN would be on hiatus while Reznor finally goes open house on his songwriting. Now he drops triple-disc instrumental soundtracks and video game music whenever, simply because he can.

Given that Angels is now signed with Columbia Records, one would think they'd skew towards a more commercial side, but An Omen is actually more challenging than the group's self-titled debut. Granted, the songs are challenging to the extent that they're also a little boring, but they remain a slightly more difficult listen all the same.

Coming off like a more polished version of NIN's Ghosts I-IV, An Omen falls somewhat short of Reznor's accomplishments, both with and without this band. At its best, An Omen draws in tension and terror from a world of ambience and dance beats. More often than not, however, it comes off as a tad bit safe. Reznor has been pretty prolific over the last few years, but one wonders what his success rate would be without so much product to clog the world of music.

Swingin' Utters: The Librarians are Hiding Something [7-inch]