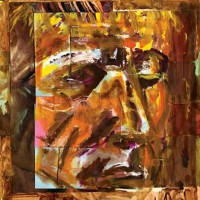 Too Small to Fail

For a guy who used to take a lot of flak from the punx, Schwarzenbach sure has gotten punker with age. Jets to Brazil may have skewed more towards indie rock, but they always stuck with indie label Jade Tree. Thorns of Life flamed out. And forgetters, ever phoenix-like, has managed to stay completely DIY despite having a resume that could make lesser bands blush. forgetters, an unexpected return to form given the band kind of disappeared two years ago, packs all sorts of weird, delightful turns.

The band's self-titled double 7" still had some Jawbreaker-isms; the full-length moves further away from that sound. A couple of songs shoot beyond six minutes. Schwarzenbach and drummer Kevin Mahon [obligatory ex-Against Me! reference] hit some sludgy psychedelic moments, most surprisingly on track two, "Lie Artist." Indeed, stylistically, the record is a little scattered. It starts and ends as a lumbering beast, but the middle packs all sorts of alternate universe singles, particularly dance-punky "Turn Away," "O Deadly Death" and "Hoop and Swan," which recalls some of the catchier elements of the 7". Jets to Brazil's more orchestral brand of indie rock returns in the form of tunes like the piano-tinged "Die By Your Own Hand" and "In America."

Still, the album feels like a deliberate break from the members' past, something that a whole mess of folks might struggle with. This is not pop-punk. Not making it any easier is opening number "Strike." Overall, forgetters is pretty dang cool, and the quiet "Strike" seems like an ideal opener musically, serving as a contrast before "Lie Artist" brings in the noise. But lyrically, it's loaded with clichÃ©s ("strike while the iron is hot," "I was raised on the run," etc). One could argue that Schwarzenbach plays with well known phrases throughout forgetters, but as a reintroduction, "Strike" can come off as embarrassing the first few times.

But man does it pick up from there. forgetters skims Schwarzenbach's history, but also draws in elements of psych rock, post-punk and garage rock. In a way, it's a grab bag of styles, but it also keeps the record diverse while Schwarzenbach takes on a variety of topics, from what it means to be American to getting totally goth. J. Robbins hasn't produced a record this raw in a while, but the way he subtly drops in synths and strings without losing any sense of the band proper is commendable. This record is lush compared to the bootlegs that have been kicking around, but it still sounds very much like a live act. Speaking of being a live act, please come back to Philadelphia. Please.