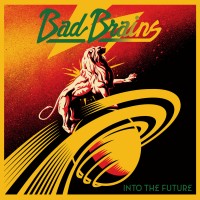 For the last 20+ years, the Bad Brains have been working against themselves. Dr. Know, Earl Hudson and Darryl Jennifer have continued to pound out punk and metal riffs that snap like whips, vocalist H.R. has grown increasingly eccentric, mumbling and cooing in a language only he can understand. On record this clash has been most apparent, with the band playing updated versions of the hardcore sound that they created and then vocals from H.R. layered on top that seem to be taken from much mellower, slower songs. In fact, many late period Bad Brains songs sound more like poorly done mashups than written material. The live show has subsequently taken an usual turn. Where Dr. Know and Darryl Jennifer used to get furious at H.R.'s antics, over time, it seems they've become used to H.R.'s weirdness. Now, when H.R. does his H.R.-isms, like performing entirely in a muted slur, or singing without a microphone, or wearing a helmet for an entire show, or even just standing in a single spot for the entire show without doing anything at all, the instrumental trio hammer down on the instruments, nonplussed by the adjacent antics, and kick out the best instrumental performance they can kick out as if the vocalist is arbitrary.

Perhaps because the instrumental section of the Bad Brains have come to an acceptance of the vocal sections zaniness, or perhaps because the vocal section has come to realize that he doesn't hold a veto switch on the live performance, the two sections seem to have come to an agreement on Into the Future, with each section moving closer to the other's objective.

As soon as the album kicks off, it's clear that Into the Future is the Bad Brains' weirdest album. H.R. opens the title track with a fluctuating call to the Almighty, stringing out his praises into long refrains. But then, suddenly he pulls back and moans in a spaced-out musing before finally launching into what is as close to his classic barking as can be expected. But, while the erratic nature of the delivery would seem to throw the album off course with other late period Bad Brains works, the instrumental section, instead of fighting against H.R.'s diversions, decides to go with him. When H.R. gets spacey, so does the band. When he gets angry, the band ratchets up into their classic sonic smash. When H.R. decides to get mystical, the band grants him a slow, massive column of sound to convey the solemness of the topic at hand. The effect of this is that, finally, the band is cohesive.

Not only that, the willingness to cover three or more areas in a song makes Into the Future both experimental and constantly interesting. While H.R. might be constantly changing his opinion of song delivery, he does stay focused enough to build up a theme, thus making his changes seem tactical. The clichÃ© about hardcore is that it gets boring because it all sounds the same. Well, the original Bad Brains were never ever boring because they were so good. Here, the band never gets boring because they are in a constant state of flux that changes just quickly enough to suggest immediacy, but not so quickly that it seems scatterbrained.

The conceit to support the band's other half is not only one-sided. In the past decade, H.R. has been criticized for vocal performances that were often sluggish and edged on boring. Perhaps encouraged by his bandmates' willingness to get weird with him, H.R. delivers his tightest vocals since I Against I. On "Popcorn" he snaps out a tight staccato delivery while the band crunches behind him with their classic punk-cum-metal riffs. "Yes I" isn't quite the same as the minute-long stormers from the ROIR cassette tape, but as the band rips along as H.R. spits out his lyrics, it's as close to classic Bad Brains as anyone could possibly hope.

Most surprising, though, is how good the band gets when they delve into true weirdness. "Rub a Dub Love" might be based on classic '80s dancehall, but with its touches of hip hop, dance music and punk, it's one of the most interesting Bad Brains pieces, and is certainly one of their best latter day tunes. Likewise, "Maybe a Joyful Noise" is based in classic Bad Brains-style reggae, but with heavy dub effects and experimental sounds, making it more than just reggae on punk, but something new entirely. The result is something shocking and more than a little frightening. If the Bad Brains being weird is so effective, then that means, despite all the criticism, jokes and insults, H.R. may see the future clearer than anyone else.