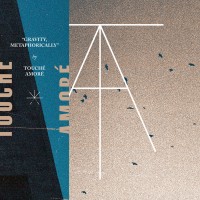 Two songs. Two bands. One give their signature sound that's made them appealing as can be over the past few years and the othe, gives a sound that varies a bit from what they're known to produce, yet they pull it off in fine form.

Touche Amore open the split with the driving aggression that Jeremy Bolm helps constantly bring to the table. Elliot Babin's drums shine the most here and really pounds home these songs. Bolm was last heard venting on Touche's split with the Casket Lottery, and I guess he decided to save his recent best for the new year. "Gravity Metaphorically" is a gem that combines the best of the band in the most typical way. Definitely a hit. When Clayton Stevens and Nick Steinhardt decide to take it down into a melodic lull halfway through, the dynamic shifts for the better. 'It was the first time in a long time that I've felt alive / At least I tried, until my highest hopes were realized / Then it flatlined / But then I woke up scared / Cause nothing's changed, at least I tried' ends the song with a most empathic note. If this is an indicator of what they've got to come this year, we're in for a treat.

It's no secret I was a fan of Pianos Become The Teeth because of The Lack Long After; I loved Old Pride but something about the former really got to me, and it's mostly attributed to "I'll Get By" in which Kyle Durfey sang about his father's passing. He's not the best vocalist around, but his voice rings powerful and that song was as moving as I could have asked for. "Hiding" follows in the same vein with a more sung approach than their usual post-hardcore/full screamo material. It actually sounds a bit like a blend of "I'll Get By" and "I'll Be Damned," and you could sense that from the opening melodic chords, Durfey wanted a more harmonic tone. With lyrics like 'There's no good in your eyes anymore / And it makes you want to drive home, drunk and alone / Nothing is worse than doing nothing / You can't stay angry forever, or so I'm told / But the house gets so quiet, sitting here wishing for just an hour or two, alone with you' shows that Durfey is far from finished with addressing his most heart-wrenching moments. The guitars and drums, are expectedly spot on, and it's safe to say, 2013's off to a great start for them as well.