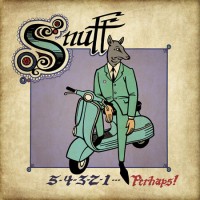 Where does one start with Snuff? Revered by many, they're a band with a great ability to churn out novelty tracks (more so in their earlier days, though), the owners of a wonderful guitar sound and one of the best âboards and horns combination to ever grace a punk record. Is that enough? Hopefully it is. However, just to play devil's advocate I will add that in my opinion the band have never really released a great album (Now let's see the comments section below light up!!) despite having all the necessary skills to do so.

So here we are with the first new Snuff album for a decade and do you know what? This is the best Snuff album I've heard. It's not perfect, and the inclusion on the digital review version of one track redone acoustically (I believe that it's two such songs on the UK CD release) seems somewhat superfluous, but I'm willing to forgive that and "Mary Poppins," which is the weakest song on the album by a stretch because everything else on 5,4,3,2,1 â¦ Perhaps! is full of one of the best punk rock guitar sounds known to man. Add to that some quality vocals and the aforementioned âboards and horn, and this album has certainly kicked me unsuspectingly in the backside and provided me with some marvellous sing-along moments as Snuff have hit the pinnacle of their career so far.

From the moment the handclaps on "In The Stocks" are joined by first the guitar and then the keyboards, I'm smitten and am reminded of why Snuff are revered by many, certainly in the UK, and hopefully around the world too. What makes Snuff songs so good on top of all the elements above are the guitar solos which seem to fit seamlessly into songs but which also stand out as huge chunks of melody, adding more memorable bits to the tracks. This is found in "From Underneath the Ice" which is, as most of the tracks are, quite the rollicking tune and benefits from some well-placed six string work.

On "EFL" the keyboards and backing vocals continually make me think of the Damned so much that I'd expect the liner notes to include the names Vanian & Sensible, but then the song makes me think of Madness too, so Suggs should also feature too. Snuff know how to bring variety to the fore!

That Snuff should be able to compile songs that are crammed full of tuneage is no surprise, but to actually have almost a whole album worth of such songs is extremely pleasing and the transition from song to song just keeps that sense going throughout the album proper. Even "Mary Poppins" is no real stinker and somehow manages to engage me whereas most weak links fail to be more than an irritant: it does at times catch me unaware and I find myself singing along to it. Yes, there is strength in depth here and although it's taken some time, Snuff have pulled a huge fluffy white rabbit out of the hat, much to my amazement.

The other thing that must be noted is that Snuff do pacey, melodic hardcore better than many bands that seem to populate that genre and the evidence comes in the form of "Mumbo Jumbo," "Bones for Company" and "I Blame the Parents," three of the more up-tempo and direct tracks that are just guaranteed to see some wild pit action in the live setting (not from me though, I'll leave that malarkey to the youngsters). Lyrically, "I Blame the Parents" name checks numerous infamous serial killers including the likes of John Wayne Gacy and Ted Bundy, and presumably is identifying that it's very easy to point the finger of blame for the actions of a person on their parents either by that person or others. The song ends with Duncan Redmond turning on the listener by saying "I blame you" â perhaps acknowledging that many of those who listen to Snuff are also parents these days.

I thank Snuff for helping 2013 start with a crash, bang, wallop.