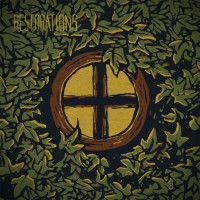 While their full-length debut for SideOneDummy Records is still a month away, Philadelphia's Restorations have gradually teased out the new material, both live and online. The latest taste: the New Old 7-inch single. Backed by an outtake on the B-side, it's yet another reason to anticipate the forthcoming LP2.

"New Old," much like the A/B 7-inch that got everybody's undergarments all types of frothy, is another anthemic rocker about feeling stagnant. If S1D is positioning Restorations as their new Gaslight Anthem, well, they might be on to something. The tune is perfect, from the gritty guitars to the throaty vox. There's no real chorus per se, but frontman Jon Loudon has such a way with a phrase that it just makes the listener focus more on his story.

"0.014MPH" is a strong track as well, albeit a lot less immediate. More of an atmospheric song that builds eventually to a big finish, it feels like a bridge between Restorations' older, more expansive material and the Springsteen-ish rock they've mastered. Again, it's totally a good song, but it doesn't quite synch up with where they've been at lately. I feel like I know why it was left off LP2 even though I haven't heard the album yet. That said, the lyrics are great. When Loudon sings, "Been having this idea that we're having the same adventure / Unfunded / Unnoticed / And alright," I feel like he's singing about all the Philadelphia punk bands that have risen up lately, even if the rest of the songs deals with failure and immobility.