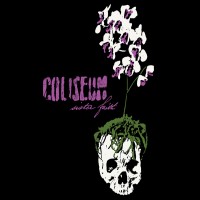 For Coliseum, less has always been more. It's hard to name another modern band that manufacture aggression and heaviness so easily, and with so few bells and whistles; where some of their contemporaries perpetually pound the listener with layers of buzzing guitars and a thunderous rhythm section, Coliseum build their songs around melodies first and riffs second without shortchanging either. On Sister Faith, that's truer than ever; it's the most classic-sounding, straightforward record of their career, but again, they sacrifice nothing to get there.

Fiery opener "Disappear From Sight" and its follow-up "Last/Lost" immediately sets the tone of Sister Faith, with jagged-yet-muted riffs, a thunderous rhythm section and Ryan Patterson's clean, aggressive vocals. The pace quickens as both songs progress, delivering an almost MotÃ¶rhead-like vibe in its attack. Indeed, Coliseum went quick and heavy on Sister Faith, instead of just heavy like on House With A Curse–that was more of a metal record, really. Sister Faith is clearly their punk record.

There are a few hints of Coliseum's heavier past, however. "Doing Time" grounds and pounds with a thick, mid-tempo, Helmet-esque riff. The five-plus minute "Love Under Will" is driven by bassist Kayhan Vaziri's thumps, with Patterson's vocals and guitar a bit more distant and atmospheric. "Under The Blood Of The Moon" is cut from a similar, if more direct cloth; impressively, it paints an even darker picture than "Love" through calculated soloing, a direct pace and haunting vocals.

The two styles collide on "Used Blood," which features the most fun riff on the record and juxtaposes it with a slow, quiet, distant trail off that's more or less just Patterson reciting the song's title ad nauseum. It's dark and it works. Same for "Late Night Trains," which features a mesmerizing breakdown centered around fast, pounding drums from Carter Wilson.

The back end of Sister Faith is loaded with energy, whether it's the punchy "Black Magic Punks" (one of Coliseum's best songs to date), the energetic, sneakily heavy "Bad Will" or closer "Fuzzbang," which between its tightly-knit harmonics and devastating low-end, could be mistaken for a Torche song. It's a fun way to cap what's a surprisingly fun album in Sister Faith, in which Coliseum channel their metal past while creating their punk present.

Fall Out Boy: Save Rock and Roll