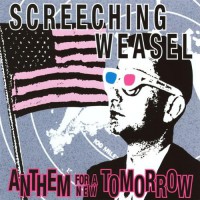 Screeching Weasel. You either love âem or hate âem. Nowadays you mostly hate them, but only for Ben Weasel's antics outside of their music. Yeah, he sucks as a person. But the string of albums he and the band made after they found their stride in the early '90s are downright incredible relics of the now-dubbed Ramonescore style.

In 1991, the band released My Brain Hurts, which saw Weasel's songwriting jump up in quality. â92's Wiggle was just as good. Then in 1993, twenty years ago, Screeching Weasel dropped Anthem for a New Tomorrow on the punk rock world, which happened to be the first Weasel album I purchased, a little late in â94. Anthem, released for the burgeoning Lookout! Records, found the band at their most diverse. There are the Ramones-homage pop punk gems Weasel found a true knack for (perfect example is the opener "I'm Gonna Strangle You") , but there are also fast, short blasts of Descendents-style punk ("Rubber Room," "Panic"), an instrumental track, and darker, weirder tunes like "I, Robot." Lead guitarist Jughead discovered the chorus pedal, which was huge in the early '90s (Nirvana, anyone?) giving quite a few of his guitar lines that underwater wavy quality not found on other Weasel albums, like in the instrumental cut I mentioned a second ago, "Inside Out."

"Peter Brady" features a pretty kick-ass cameo from Fat Mike, bringing Chicago and Bay Area punk rock together to great effect. This is Fat Mike at his youngest, loudest and snottiest, nabbing him between White Trash Two Heebs and a Bean and Punk In Drublic and at the start of Fat Wreck Chords--basically Burkett at the apex of his songwriting and influence. "Totally" brings the album back to Weasel's wheelhouse and is a quintessential skate/surf punk anthem (for a new tomorrow?). "Trance" shows the angrier, less-poppy side of the band, with a minor chord progression and mid-tempo swagger. It still has catchy "eye-ee-eyes," though, thank goodness. "Claire Monet" shows the touching, softer side of Weasel's lyrics, which was always a strong suit but never quite utilized to its full potential, featured in maybe one or two songs an album for the rest of the band's career.

Also of note is this is the first album to feature the "classic" lineup of SW, with Danny Vapid on bass and Ben taking over second guitar alongside Jughead, and Dan Panic on drums. The band is clearly locked in tight and at the their best, but they would break up (for the second time) shortly after the 1994 album How to Make Enemies and Irritate People, not even touring behind either record. They would reunite and put out a solid album in 1996's Bark Like a Dog, but the band were never the same. Anthem For A New Tomorrow represent Screeching Weasel showing their strengths while stretching in different directions. It is their best album, no doubt in my mind.