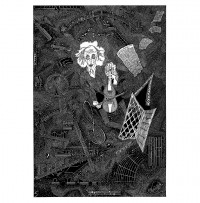 One of the reasons that Rudimentary Peni's Cacophony is so effective is because it's impossible to determine its purpose. Indeed, it's a nigh impossible task to determine what it even is. Instead of having a focal point or direct message, Cacophony is a series of riddles and pathways that wrap around themselves, double back, and sometimes don't lead to anywhere. But what makes the secret of the album most appealing is that within the intertwined messages, it seems that there has to be a core idea, no matter ultimately horrifying.

As is a motif for the band, Cacophony found Rudimentary Peni reuniting after a tragedy had befallen them. 1983's Death Church was well-received in anarcho-punk circles; rampage of an album, Death Church was a blast of 21 minute-long songs that cloaked political messages in gothic and fatalist vestiges. In fact, some of the songs weren't analogues for politics at all, but were direct assessments of the human condition and oblivion. The record still had enough traces of Crass for the punks to like it; though nearly every song threatened to break out of the classic punk structure and birth something entirely new.

How gruesome is it, that Rudimentary Peni's new birth followed a near death scare of a band member, albeit one caused by rapid growth. Barely into his twenties, bassist Grant Matthews was diagnosed with cancer, and if you believe vocalist Nick Blinko's account in his semi-non-fictional book The Primal Screamer, then the cancer very nearly killed Matthews.

Instead of retreating from their fatalistic imagery after Matthews recovered, the group plunged headfirst into death concepts and in 1987 released the spiraling masterpiece that is Cacophony. Rudimentary Peni built the thematic structure around the writings of horror master H.P. Lovecraft, intertwining many of the Lovecraftian beasts and even Lovecraft himself into the album. "Crazed Couplet" features the famous Lovecraft prayer "That is not dead which can eternal lie / and with strange aeons even death may die" recited over and over in increasingly distorted vocal loops while Blinko screams "Dead! Dead! Dead!" over and over. On "Shard," Cthulhu himself shows up after Blinko, directly addressing the listener, begs that someone understand what he is getting at.

But most deftly, on "Imps of the Perverse," a critic of Lovecraft rants off a list of reasons why Lovecraft wasted his talent, which could have been better put to use in the guidebook industry. The implication being of course that Lovecraft was so far ahead of his contemporaries that they could not perceive the strange heights he had reached. It would be hard to ignore the possibility that Lovecraft is merely a proxy for Blinko... and with good reason.

Just as the lyrical content of Cacophony was radial and confusing, the music was doubly as wild. Though the band still ripped through incredibly short, choppy riff punk songs, they are bound by ghostly interludes that add meaning and contrast to the lyrics. At one point, the speaker is deafened by thousands of chattering teeth. At another, hissing creatures surround the headphones. On "American Anglophile in the World Turned Upside Down" two speakers loop their conversation over one another, though it doesn't seem as though they are talking to each other as much as trying to drown each other out.

Just because songs start with a power riff doesn't mean that they won't collapse at any minute, even mid-passage. Just because a song starts with a speaker giving an in-depth description of how he plans to redouble his efforts studying the dark arts doesn't mean that a beast won't suddenly spring from the walls and announce "Things have learned to walk that ought to crawl", only to be followed by a song with lyrics consisting only of "Arkham Hearse" moaned 11 times in a row.

What makes Cacophony most impressive is that despite the shards of songs, the constant twisting nature of the music and its constant state of flux, is that it still rocks. The concept of madness is often the mandate when talking about Rudimentary Peni, but here one wonders if the band are really playing a ruse. Just when the album seems ready to spin out of normal understanding, with perhaps an English professor pontificating or a voice stretched out to a twenty-second moan, the band rip back with a punchy riff that would stack up to any Ramones or Clash banger there is. Somehow, the band knew how to draw close to madness and peer over, but never fall all the way in, merely taking in the abyss without succumbing.

The Southern Records remasters really help out the original issues. The original releases had a bit of a muddy sound due to the technology of the day, which was a shame, because it muted a little bit of the chaotic movements which are stacked five and six stories high on this release. The remasters sharpen the sound, but maintain the texture of the original music, making these songs of darkness as clear as they can be.

But why are Rudimentary Peni so fixated on Lovecraft? Do they just like his scary stories, or do they truly feel that he understood the true darkness of the universe? Do we even understand the deteriorating mind of Blinko, who would be committed to a mental hospital around the time of this album's initial release? It is somewhat telling that at the end of this chaos, Blinko calls out in search of a being that can understand how he feels, and the only thing that answers is Lovecraft's great horror, Cthulhu, a beast that existed to only feast upon, enslave, and destroy the universe.